Constitution Preamble or Why the Congress is addicted to secularism 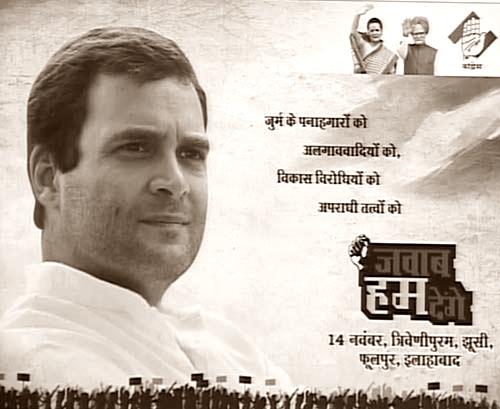 In the recent Constitution Preamble row, the Congress has been exposed as a party which has always tried to conjure up bugbears and hide behind claptrap. So, it sees dangerous conspiracies in an inadvertent error, if it can be called an error. For the depiction of the original Preamble to the Constitution in Republic day advertisements can scarcely qualify as a blunder, certainly not a ‘communal’ or ‘corporate’ plot.

Much has been said about the omission of two words, “secularism” and “socialism,” in the advertisements. Manish Tewari made a puerile statement that the omission was a prelude to their substitution with “communal” and “corporate.” Adopting the path of minimum resistance, the government has ensured that henceforth all advertisements and government communication will use the 1976 version of the Preamble.

This occasion should be used to discuss why the two words were inserted in the Preamble 29 years ago. Tewari and other Congress leaders would like us to forget the Emergency (1975-77) when Indira Gandhi had emerged as a tyrant, her son Sanjay and his cronies ruled the roost, Opposition leaders and thousands of protestors were thrown behind bars, the press was gagged, and people at large at large suffered from the ill effects of socialism.

More than three decades later, even the GOP recognized the vile nature of the Emergency: “The period of the Emergency saw the suspension of normal political procedures and fundamental rights, arrests of the leaders of the Grand Alliance, and enforcement of press censorship and strict discipline… More than one lakh people were arrested over the 19 months of the Emergency. Powers of the judiciary were reduced drastically.  Unlimited state and party power was concentrated in the hands of the Prime Minister.”

While all this was happening, the Congress and its intellectual toadies were not cowering in shame and guilt; they were justifying the horrors of dictatorship in the name of… well, no prizes for getting it right—secularism and socialism. The party was of the view that the two S’es were bestowed with miraculous powers to wash its sins of bad governance, statism, repression, and corruption. It was at that time that the draconian 42nd Amendment to the Constitution was made and the two words entered the Preamble.

The statement of objects and reasons mentioned that the idea was “to amend the Constitution to spell out expressly the high ideals of socialism, secularism and the integrity of the nation, to make the directive principles more comprehensive and give them precedence over those fundamental rights which have been allowed to be relied upon to frustrate socio-economic reforms…” (emphasis added)

The 42nd Amendment was brought because Congress leaders were miffed by the abominations called fundamental rights that often hampered their efforts to achieve their “high ideals.” L.K. Advani wrote in his diary on December 16, 1975:

“The Supreme Court has been hearing GOI’s appeal against the High Court judgments in favor of MISA [an illiberal law during the Emergency] prisoners. This includes our case also. Justice [H.R.] Khanna is reported to have pointed out to (Attorney General) Niren De that Article 21 of the Constitution deals with the right not only to personal liberty but also to life. Is it the stand of the Attorney General that even if a person is killed he has no remedy because enforcement of this right has been suspended?  Niren De replies: ‘It weighs on my conscience. But that is the position in law’.”

This was actually the position that Congress leaders had adopted four decades ago and made it the law. They found nothing wrong in snuffing out the life of an innocent citizen if it suited their fancy—of course, for the sake of secularism and socialism.

The 42nd Amendment was the culmination of the Congress party’s jihad against fundamental rights, reason, decency, and propriety. Secularism and socialism were the gloss that varnished the dirty war Nehru and then Indira Gandhi had waged against every noble ideal that the freedom fighters had cherished. Muslim appeasement increased over the years, the Directive Principle on uniform civil code was left untouched, and Article 370 became practically permanent. Socialism became the excuse to empower the politician and the bureaucrat, enchain the industrialist and the farmer, and enslave the nation in general.

The Congress, which is in a terrible shape right now hopes that it can still dupe the people of India once again by crowing about secularism and socialism. So, it wants them to be seen everywhere.