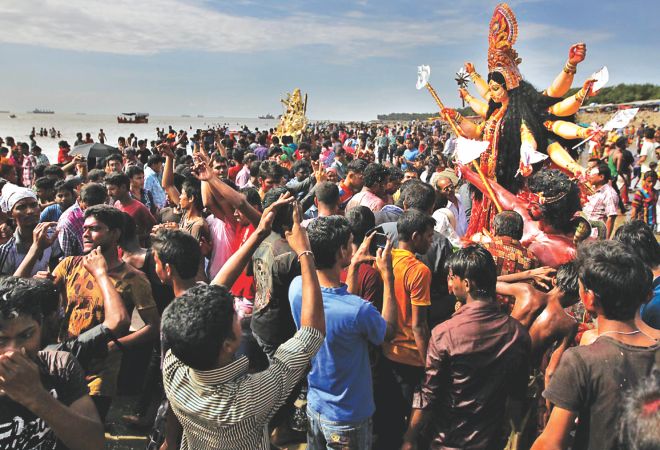 Waking up to the sonorous voice of Birendra Krishna Bhadra, reciting the intensely poignant Mahisasuramardini, announcing Mahalaya, is a moment of extraordinary significance for Bengali Hindus. Its memory prompted me to reflect on the catastrophic fate of contemporary Bengal. Dolorous is the word that instantly comes to mind, when contemplating the intellectual, spiritual and moral disintegration of Bengal. Its historic antecedents are in the attempted partition of Bengal under Lord Curzon and its eventual occurrence four decades later. The trauma of the experience gave rise to a self-destructive malaise, paradoxically and inexplicably, presided over by communist refugees fleeing Islamic Jihad in East Pakistan. The final political chapter is being written by the banal phenomenon of Trinamool Congress. Under the bizarre rule of its leader, idolised by many Bengalis, a major growth sector of the local economy is middle class prostitution, testament to the moral nullity that has overtaken its society.

The Bengal renaissance that led India into modernity, reaching back into its Vedic past, gifting the world Swami Vivekananda and a galaxy of luminaries, has all, but evaporated. No profound reflections by a sage like Rishi Aurobindo, unprecedented scientific endeavours of a Jagdish Bose and Meghnad Saha or poet of Tagore’s astonishing talent or the renowned filmmaker Satyajit Ray, have emerged in recent decades. And nor is there in the horizon a new grammarian, linguist and moralist, echoing Montaigne, like Ishwarchandra Vidyasagar, taking humanism to new heights, clad in modest dhoti. Instead Bengal’s post-independence educated class unleashed nihilistic bloodlust on society in the name of a Chinese warlord, Mao Zedong, in cahoots with Islamic Jihad and then fled to a salubrious life abroad. This cynical and self-seeking cabal has since been virtually urging US and Western imperialist intervention to curb India’s alleged descent into Hindu fascism!

Of course Hindu civilisation itself has also been in retreat for more than one millennium, although its reluctance to acquiesce to an ultimate coup de grace is both remarkable and puzzling. In the aftermath of the transfer of power in 1947, completely erroneously labelled peaceful, this historic hiatus of an endless pause from socio-cultural erasure appears to have been broken. Hindus are now descending rapidly towards cultural and spiritual oblivion. Independent India had fallen under the suicidal spell of an eccentric, the kindest accolade he could be accorded, and he nominated a primus inter pares ill equipped to secure and defend the civilisation of Indica. It was also at his insistence that the new government of India was obliged, by the threat of a fast unto death, to fund the very war the state of Pakistan unleashed against India within months of partition. His tragic murder consigned the fate of Hindus and any prospect of social and spiritual renewal to the ideological detritus of the departing colonial power. The outcome has been a conspiracy to impose an ideology on the fledgling republic that eventually empowered Islamic Jihad, Christian resurgence and grand larceny as its abiding motifs.

The chosen nominee for the premiership of independent India was himself from a morally bankrupt Kashmiriyat political tradition of incoherence and imbued with vaulting self-regard that had already surrendered its own community to predators, although the endgame awaited the 1990s. His family subsequently sought to turn popular Indian democracy into indefinite dynastic rule, by nurturing every latent fault line and endangering the nation’s very survival, until boundless greed overwhelmed all judgement and common sense. It is they, who were responsible for the immeasurable tragedy of the Punjab, in a vain and imbecilic attempt to augment regional political power to dominate the Centre. Their earlier catastrophic follies in relation to Tibet and Kashmir are open IOUs to fate that hang like a sword of Damocles over future generations. The recent rise of Narendra Modi, who ended the unfolding calamity abruptly was considered to be the moment of a reversal of rapid decline, though it could not be and was nothing of the sort.

In the meantime, Hindus are in confused retreat on multiple fronts. The best outcome they can apparently hope for and many earnestly seem to desire, is to become like Koreans, with the accretion of a degree of prosperity, but without history or their rich and vibrant antecedent traditions and culture. Korea is now largely a Christian nation and its remaining Buddhists dismayed at waning state patronage of their age-old religious and cultural heritage. What historical national identity Indian secularists would prefer without Hindu antecedents is a mystery, since all culture and memory permeate it. The defining societal hallmark of this terrifying prospect is the growing insignia of the Ambanis and Vijay Mallya rather than the sage Adi Shankaracharya and divine Swami Vivekananda. Wealth, its grotesque display and obscene consumption, imitating the imperialist and racially arrogant elites of the US, is the warped longing degrading the humanity of Hindu society, as it has done elsewhere. Self-restraint and genuine concern for the welfare of the many in desperate circumstances, the essence of self-realisation and godliness, appear to have been substituted by the moral universe of Hades.

Abroad, Indian humanities and social science academics have been whipped, en masse, into an incomprehensible and incoherent frenzy of rage against imaginary signs of supposed Hindu self-assertion. So ferocious is their desire to curb this alleged Hindu descent into fascism, embodied by Narendra Modi’s modest electoral success, they are evidently willing to join hands with Islamic jihad to protect the oxymoron of Indian secularism. Some among them not-so subliminally seek armed international intervention to protect their terrorist allies from the wrath of the Indian state, under the guise of minority rights, and, presumably, to prevent church window panes being broken in India. The genocidal impact of such intervention, visible in the Middle East, is possibly regarded as an incidental bonus!

Foreign governments like the US and the UK, which have always had malign intentions towards India, want to use it as a pawn against China, though the prospect of betrayal in a Sino-US deal that institutes condominium is the most probable outcome. Significantly, both governments and their European allies, aided by the Republic of Korea, are waging a deadly war simultaneously to permanently subvert Hindu civilisation through religious conversion. In a recent visit to Nepal, I was stunned to be told by several knowledgeable public figures that the church privately boasts about how a third of the population has already embraced Christianity. Christianity has indeed advanced in Nepal through allurement, subterfuge and outright bribery, including a multimillion dollar inducement to a former prime minister. The dramatically successful campaign of religious conversion in Nepal, across India and within the UK itself, abetted by some infiltrated British Hindu social and religious organisations, highlight the perversity of the situation.

Yet the rise of Narendra Modi represents a moment of respite and hope. Having inherited a parlous nation, in the throes of economic, political and moral chaos, the appropriate priorities for reversing its decline are easy to debate and dispute. And the authority and power he and his government enjoy are not unfettered, as political and social life in India brutally demonstrated in the past two years. The incumbent government is besieged on many fronts by an array of truculent adversaries, determined to thwart even the most indispensable policy measures. International conspiracies, originating in foreign capitals, aided by treasonous domestic surrogates and incited by a suborned anti-national media, abound visibly. The urgent task of national economic revival is preoccupying the Modi government’s attention and socio-cultural initiatives appear to enjoy less prominence. However, the task of securing the nation’s future in a hostile world, by creating national productive capacity and ensuring future electoral consolidation, surely depend on the overall policy stance adopted by Narendra Modi.

Hindu society is also stirring elsewhere, silently, but with heartening self-confidence. The wave of a massive movement, Hindutva Abhiyan, for example, is spreading from the apparently unpropitious and obscure tribal districts of Mandla in Madhya Pradesh to adjacent regions and beyond, across India. It draws its inspiration from the likes of Vivekananda, Aurobindo, and Chanakya and promises to overturn the long held accepted norms of acquiescence to threats against Hindu society and the retreat that usually follows.