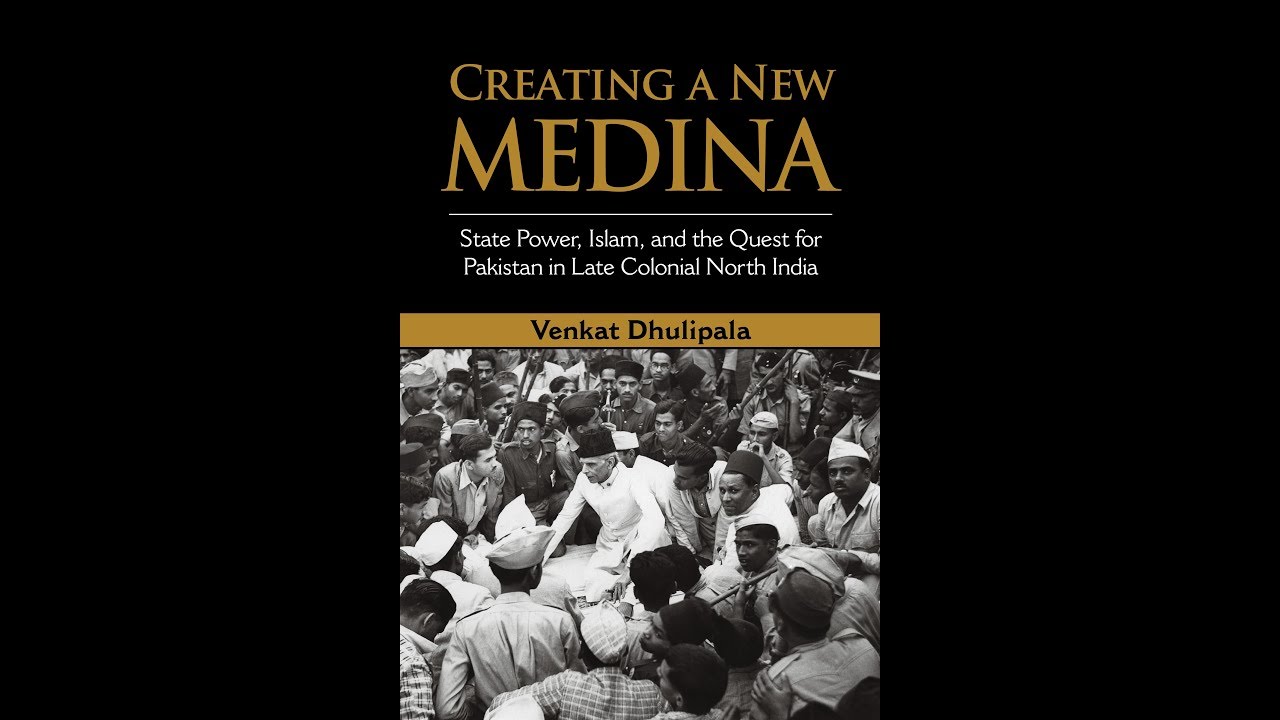 Creating A New Medina by Venkat Dhulipala is available on Amazon for purchase.

Partition of India is one of the saddest parts of Indian History and Freedom movement. Some claim that the idea of Pakistan was just a vague idea but the author of this book has shown the specific steps taken by pro-Islamic leaders to achieve the dream of their Pakistan. Venkat Dhulipala has lucidly described the steps taken by people like Mohammad Iqbal and Mohammad Ali Jinnah to form the Islamic state just like a new Medina-Pakistan. The book also covers the roles of political organizations such as Muslim League and the wahabi organizations such as Deoband Ulama for their demand of Pakistan in late colonial north India. The book starts from the alliance of Muslims and ends with the creation of a separate Islamic state Pakistan.

It was the British who first gave a separate identity of Muslim over their national identity. I personally think that after the official support of congress to the caliphate movement; the demands of Muslims increased rapidly. So, Congress tried to make them happy by satisfying their demands. These continuous demands increasing day by day. One can also say that this lead towards partition of India. Let us look back at the history of Indian Freedom Struggle. In the revolt of 1857, both Hindus and Muslims together tried to revolt against the colonial powers. But from the division of Bengal in 1904 and Morley Minto reforms they felt that they had to have special status. Years of 1920 to 1947, shows their increasing demands from supporting the caliphate movement to the separate nation-state Pakistan.

The book’s intellectual content starts from the chapter “Nationalists, Communalists and the 1937 provincial Elections.” The chapter starts with the Government of India’s act of 1935 and divisions in the Muslim Politics. Then after it describes formation of U.P. Muslim League Parliamentary Board (UPMLPB). It effectively represents the conditions and demands of the MUB and NAP groups; also how they merged and formed UPMLPB. Hindus and Muslims of the colonial India were had the only religious separation till now. But from the provincial Assembly Elections of the 1937 leads political and cultural separation between Hindu and Muslims. Ulama and the AMU played an important role regarding these elections. Polarization in voting affected the elections.

Second chapter is all about the Muslim Mass Contacts and the rise of the Muslim League. It was essential for the Indian National Congress and Muslim League to attract the Muslims toward them for voting purposes. The role of K.M. Ashraf is somehow important in this chapter. This was the time were new definition of the Qaum (Religious Community especially Muslim) is generated.

Islam has now become political and has so much influence among the Muslim community. Therefore, political parties like Muslim League and Congress both appeased Muslims because they were not able to win any election without appeasing them. As they started fulfilling their demands, their demands were increasing. One portion of this chapter also describes the conflict between Nehru and Jinnah. Muhammad Iqbal also wrote that Muslim’s problem is not only economical, but it is cultural. Jinnah also said the muslims of United Province, “Don’t be led away by the cries of Dal-Bhat.” These types of statements by the leaders of the Muslim League leads to change the ideology, organization and declared goals of Muslim League in order to meet the congress challenge.

The chapter also consists language initiative of Congress by spreading Hindustani as national language and VandeMataram as national song. The fatwa of Ashraf Ali Thanawi to the Muslims of Jhansi was also important part of chapter. This fatwa shows us how ulama which is important pillar of Islam created political, religious and cultural separatism in the minds of Muslims by issuing such fatwas. This chapter ends with closure of Muslim Mass contact program of Congress which was started to contact Muslim masses to vote for the Indian National Congress.

A debate over Pakistan in public sphere is the chapter third of the book. Dr.Bhimrao Ambedkar wrote one book ‘Thoughts on Pakistan’ in 1940. It shows the clear thinking of Dr. Ambedkar on this issue. He believed that it would be difficult for India to handle such conflicted parts that wanted a separate nation-state.  Dr. Ambedkar said that the intentions of Muslims were clear. They just want to make Hindus minority in India and abolish voting rights of the minorities. He also said that partition was the best answer to the Muslim aggression.

The most important part of this chapter is resolution in Lahore by Muslim league in 1940. Muslim league passed the resolution of their demand for a separate nation for the Muslims of India. Pakistan became the official demand of Muslim League. This chapter also consists the clarification on Pakistan between Gandhi and Jinnah on 15th September, 1944. Gandhi had opposed the Lahore resolution and the ideas proposed by Jinnah. The chapter ends with the concluding remarks of the Dr. B. R. Ambedkar on Hindu India and Muslim Pakistan.

Fourth chapter of the book has title named “the Idea of Pakistan in United provinces”. Pakistan had become the official demand of the muslim league after the Lahore resolution. However, it also needed how their new nation will be? Therefore, after Lahore resolution there were initial confusions about the idea of Pakistan; the role of United Province Muslim League in Pakistan and reservations on it. The long discussions on socialism, capitalism and dictatorship in their new nation are also covered.

The Raja of Mahmudabad had put forward the Idea of Pakistan as Muslim state in Madras session. The Indian Muslims had made it clear that the goal of Indian Muslim is not only “Purna Swaraj” or ”Complete independence” but it is “the very right of self-determination.” Their demand was a place for themselves where they could re-establish the government of Islam. (Now, it is time to think that separate identity of Muslims had already divided India into three parts. When will we Indians learn a lesson from our history? In addition, governments should also stop their policy, which provokes separate identity of any individual religion.)

Soon after the Lahore resolution, Nawab Ismail Khan convened a press conference of ulama and Muslim intellectuals to draft a blueprint of the Islamic constitution of Pakistan. Ismail Khan and Khaliquzzaman were the main intellectuals who attended the first meeting of constitution committee in the Nadwatul Ulama, Lucknow. Nadwi- who had cordial and very long relationship with Nehru was appointed as a convener of this committee. This committee thought and analyzed on various topics of Sharia. How the law and justice should be in the Islamic state of the Pakistan? The selection of the caliph to the role of caliph- various topics were discussed by this committee.

Fifth chapter of the book is “Ulama at the forefront Politics-Three critiques of the Pakistan.” This chapter starts with C. Rajgopalachari’s resolution. He said that the demand of the Pakistan is a product of Jinnah’s ‘Diseased Mentality’. Nehru fistly criticized the pakistan’s demand by saying it as ‘Foolish’ and derided it as Highly anti national. Nevertheless, later he had appreciated it by saying ‘easy solution of communal problem’.

Maulana Syed Muhammad Sajjad published a critique on Lahore resolution in the 19 April 1940 edition of weekly Naqeeb. His critique was published under heading of “the fraud of Islamic Pakistan’. Maulavi Tufail Ahmad Manglori published a critique named “Joint electorates and the shining future of the Indian Muslims.” Third critique of this chapter is critique of Maulana Hifzur Rahman Seoharvi’s comprehensive Moral and Pragmatic critique of Pakistan. The chapter is all about these three critiques and perspective of India’s division by muslim scholars.

Sixth chapter has informative knowledge on the role of Urdu Press and the controversies on Pakistan. This chapter also has public opinion on Muslim Nation-State named Pakistan. In this chapter, Maulana Bazmi openely criticized the muslim league’s Pakistan as well Maulana Rizvi’s defence on Pakistan must readable articles.

Seventh chapter is on Fusing Islam and State Power. Shabbir Ahmad Usmani’s idea of Pakistan was very different from the thought of modern state of Jinnah. His ideology was Islamic state exactly like the heading suggests Creating a New Medina in Pakistan. Pakistan became Islamic state rather than becoming modern state.

8th chapter in this book is the referendum of Pakistan. The situation of Muslims in Indian environment, Islam and Pakistan are the readable topics in this chapter.

Someone truly said that one could not change the history but learn a lot from history. As we know, partition is the saddest part of India. We cannot simply undo it but we can take care in future that history should not be reviced. This book helps us to understand the situation and factors in colonial India which led to partition of India on the religious basis. I also suggest every student who is studying Indian Freedom Struggle and History of Pakistan should read this book.