Decline & Fall of the Hindu Civilization in Cambodia 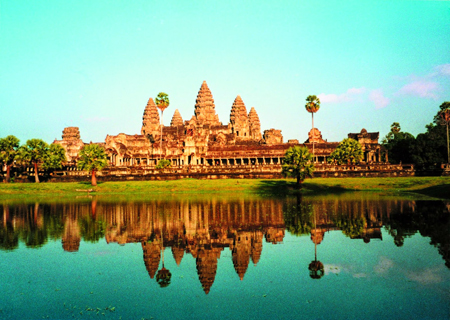 Cambodian history illustrates the interplay of economics and ideology in defining the fate of a nation. A vibrant South East Asian empire that selectively adopted Indian civilizational norms and institutions expanded over a 1,300 year period before it witnessed a steady 700 year decline.

The Indianized Khmers and their predecessors were the first most powerful people in mainland South East Asia between 1st and 13th centuries of the Common Era (CE). Later Hinduism flourished, followed by Buddhism. The Khmer empire included the southern half of what is today Vietnam, North East/North Thailand and Laos. It stretched to the borders of Burma and the Malay Peninsula. The interplay between the Cambodian and the classical-era Indian civilizations should be of interest to any student of Hindu history.

The early kingdoms of Funan, Chenla and Champa in the first millennium of the Common Era were the precursors of the Khmer empire. The Cambodians adopted Indic traditions in the 1st century CE via the maritime trade centers in what is today Vietnam. These ports were situated on the lucrative trade routes between India, the Indonesian archipelago and China. The Hinduized Kingdom of Funan, reportedly established by the Brahmin Kaundinya, dominated the Indo-China region between the first and the sixth centuries CE. There were trade links with the Gupta Empire and later, the Pallava Kingdom. Indonesian influence was significant. The Saivite and Vaishnavite Hindu traditions had left their imprint.

The Khmer subsequently moved up the Mekong river to avoid the Indonesian naval domination. The expansion of irrigated wet rice agriculture complimented the earlier maritime trade. Authoritarian kings legitimized their rule using social concepts borrowed from India. Jayavarman II unified the Khmer in 802 CE forming the Angkor Empire. Having declared himself a Devaraja (God King), he embarked on a military conquest. A succession of strong kings followed until the 1200s CE. The consolidation of the state was linked to economic surplus and religious practices. Huge investments were made in the fields of irrigated agriculture, temple construction and the military. There were alternate periods of tumult and those of empire-building. Cambodia traded with India, China, the Indonesian Archipelago and the Burmese Mon dynasty. It was an era of unparalleled prosperity.

Kampuchea was a hydraulic civilization. A centralized bureaucracy administered a vast irrigation network. The King’s control over the water resources and the agrarian surplus resulted in a prosperous empire. Successive rulers invested their resources in an expensively huge campaign of construction, legitimized by Brahmanic ritual. The capital of Angkor may well have been the largest pre-industrial city in the world with an urban area of 1,150 square miles and a population of one million people. At this time the biggest towns in the Christian West Europe did not exceed twenty-five thousand residents. Angkor may have also been the world’s busiest city at that time situated at the centre of a vibrant overland and riverine trade network.

The temple of Banteay Srei, dedicated to the God Shiva and constructed in 967 CE by a courtier for King Jayavarman V, was known for its intricate three dimensional stone carvings depicting scenes from Mahabharata and Ramayana. Suryavarman commissioned the construction of Angkor Wat in 1112 CE, in the honour of God Vishnu. This is still the largest religious structure in the world. The artistic workmanship is sophisticated with scenes from the battle of Kurukshetra, the Battle of Lanka, the Churning of the Ocean of Milk, and the Battle between the gods and demons carved on the panels of its walls. The Hindu epics were etched in stone in stone but also, brought to life through literature, theatre and dance. The temple towers dominated the surrounding countryside flanked by irrigated paddy fields, palmyra palms and banyan trees.

The assimilation of Indic concepts stimulated the Khmer people. It was a time of civilizational efflorescence where new traditions and ideas were adopted. The ruling dynasties were Hinduized. Cambodia adopted Indic traditions of administration, aesthetics, architecture, calendar, court ceremony, economy, jurisprudence, literature, religion, statecraft and theatre. The Dharmashastras, Mahabharata, Ramayana and Saivite Tamil hymns left their imprint. The Khmer alphabet was derived from the Pallava grantha script. The Cambodian New Year coincided with the start of the Hindu solar calendar.

The Khmer empire reached its zenith in the 12th century CE. It annexed neighbouring states and controlled mainland South East Asia. It dominated the South China Sea. In 1181 CE, Jayavarman VII adopted Mahayana Buddhism and commissioned the construction of the Bayon in nearby Angkor Thom dedicated to the Bodhisattva Avalokiteshwara. The Mongol army invaded soon, thereafter. Kampuchea was able to buy them off with its enormous wealth. But its military prowess had begun to decline.

The unceasing military campaigns and the expensive temple building as well as public works program led to a fiscal deficit. The increased taxation burdened the peasant population and caused discontent. Deforestation, linked to increased rice cultivation and construction, undermined the irrigated agriculture economy. It silted the man-made water ways and disrupted the complex irrigation system. The land witnessed an ecological and infrastructural breakdown. The elaborate court ceremony centred on the Brahmanic concept of the God King or Deva Raja had exhausted its capacity to provide meaning to the tired people of the kingdom.

The Khmer populace adopted the simplicity of Theravada/Hinayana or southern Buddhism in 1295 CE under Indravarman III. Sinhalese influence was felt at a time when Sri Lanka itself had been attacked by the Magha of Kalinga. The Pali canon supplanted the Sanskrit texts. Buddhist iconography was retrofitted into parts of Angkor Wat at a subsequent date. Sri Lanka helped transform Cambodia into a Theravada Buddhist land. Was this loss of Hindu civilizational momentum due to the disruption of trade and intellectual links with India given the Turkic invasions of South India? Or was it due to the beginning of gradual Islamization of the ports of Sumatra and Malayan peninsula on account of Bengali, Gujarati and Arab traders in the aftermath of the Chola decimation of the Sri Vijaya maritime confederacy? Or were there other factors at play? Had Hinduism lost the capacity to renew itself in the changed South East Asian circumstances?

What is clear however is that this civilizational shift coincided with Cambodia’s period of terminal decline. The dark ages had commenced. Thai in the west and Vietnamese in the east annexed large swathes of Kampuchean territory. Thai annexed the present North East Thailand and Laos. Thailand, unlike Cambodia, had become a vibrant power once again with its adoption of Theravada Buddhism in the 13th century CE under the Sinhalese influence.

While Thai people also assimilated the Hinduized Khmer classicism, they continued with their incursions, plunder and annexation of Khmer territory. The Thai state sacked the Cambodian capitals in 1432 and 1594. Tens of thousands of Khmer peasants, scholars and artists were taken to Thailand as slaves.

The Vietnamese meanwhile expanded southwards to incorporate what it today the southern half of Vietnam and the Mekong Delta, originally Khmer. The much reduced Khmers became pawns in a Thai-Vietnamese chess game. Thailand and Vietnam agreed to a joint suzerainty of Cambodia in 1845.

Cambodia was relegated to the backwaters. It continues to be overshadowed by its two more powerful neighbours whose policies helped define its sad history in the 1970s and 1980s when millions perished. The Khmer often retreat into an anti-Vietnamese and anti-Thai xenophobia. This was witnessed in a recent emotive dispute over the control of a classical-era Saivite Hindu Khmer temple of Preah Vihear on the Thai border.

One can only hope that the 700 year period of decline will reverse itself and Cambodia will reclaim its past grandeur and enlightenment. May Vishnu of Angkor Wat revive this deeply fractured and traumatized land.