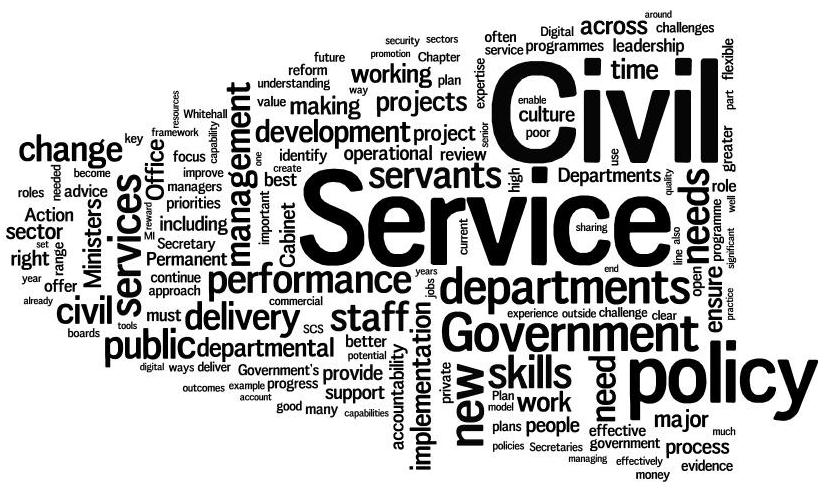 Above slide showcases the Civil services ecosystem. On the top of the slide is the Civil Services exam that has to be passed.

In 2016, over a million young people took this exam. That’s twice as many people as the number of people sitting for the GRE exam, which is meant for getting into the a graduate school in the United States. There are over 2000 centers in over 60 cities across India, where this exam is conducted.
Bottom of the slide has young applicants. In between there are three aspects: syllabus, ideological writers and coaching institutes. In this article, we will discuss the syllabus in detail.

There is a syllabus which is controlled by the UPSC which is the exam body. This is the body that conducts this exam, sets the syllabus and thus selects all civil servants of various services: Indian foreign service, diplomats, police services, tax and audit and account services.

This syllabus is a 100 plus page PDF book. This syllabus contains material that is written by ideological writers viz. Well known Left wing writers and newspapers and publishing houses that have a certain ideological bent of mind.

Let us review some of the Social sciences’ curriculum:

Here is a quote from the actual syllabus.

My overall impression of the Anthropology curriculum is that it has one of the worst bias of the western kind.

Anthropology started during the era of colonialism when the West was coming across primitive tribes and primitive people in the various continents from the Americas, Africa, Asia and they wanted to understand who these people were.

The idea was to conquer the natives and to do that natives were to be understood. This led to a field of Anthropology where people would go and become friends, learn to wear their clothes, learn to eat their food and understand their language but it was a one-way street. It was the western lens or dristi to see other people and to map them in the western representation.

So the whole field of Anthropology has from the very beginning been tainted in this kind of racist manner. Recently, western anthropologists or at least some of them have been reflecting and criticizing their own field and trying to do away with these things. In fact, they are against the idea of race. But here in India we are still following the old anthropology school.

We are not cherry-picking theories. The “a” through “j” are the topics listed in the syllabus in exactly this order, exactly this vocabulary. Now if we look at some of these terms, we won’t understand what’s going on. An average Indian who thinks he understands Indian society, will not be able to relate to this.

So we are foreigners in the way our own subject is being profiled or studied. Observe in parentheses – there is not a single Indian there.

These are names unfamiliar to 99.9 % of people of India. So if we are being studied by these weird, strange European theories based on the expertise of these strange, unknown, alien people to us, it is quite a tragedy. Why don’t we have our own theories on who we are. Our own exemplars on who we are, our own dristi telling us who we are.
I have studied some of these scholars (listed above) and there is a lot that can be argued against their theories. Those theories are so loaded with bias, wrong assumptions, false translations, prejudices from their own point of view, that these people have been criticized in the West also. But in India it’s sort of like a Bible, what the West has given us becomes something non-violable, we follow it like obedient servants. So this is kind of serious problem for me.

By the way the cutting edge of neuroscience research in the West and cognitive science research in the West is using Indian models studying yogis and meditators to develop the next generation of theories. And Indians instead of being the pioneers in reviving our own traditional theories and not letting the West take them away, are in fact are copying old western theories of mind.

I would like to mention an interesting episode. In 2002, IIT-Kharagpur wanted to celebrate its 50th anniversary and they wanted to have many conferences on various disciplines. They applied for a grant from my Infinity Foundation to fund some conferences. I looked at the list of conferences, I found the one called “Mind Sciences” to be very interesting, so I wrote to them saying that I would like to sponsor the conference on “Mind Sciences” and asked them to send me the list of speakers and topics.

The topics that they had sent were all western. There was no Indian theory of mind. It was all fashionable western theories – some of them were even obsolete. So, I sent back a note saying I will sponsor this conference on the condition that there should be at least one panel on Indian ideas of mind. And I got a nasty note saying that we are not chauvinist, we are not saffron, and that we are scientific people and we don’t believe in all this kind of stuff – they mentioned a very pejorative view of Indian ideas.

There was a Buddhist, Robert Thurman, he wrote an abstract on Buddhist theories of mind and how these theories are at the cutting edge. There was one scholar in Cambridge – a western scholar. He wrote on Patanjali’s yoga sutra. Somebody else wrote on Sri Aurobindo, somebody else wrote on Kundalini. So I got a collection of these proposals and sent them to IIT-Kharagpur.

All those people whom we sent, got standing ovations. Indians loved it. The Indians love to hear good things about themselves provided it is being said by westerners.

I am so disappointed that the people who make the syllabus of the UPSC, have not included a single line in that syllabus concerning Indian theories of mind. A very sad state for India considering we have been supposedly independent for 70 years.

Let’s move on to Political theory and Indian politics in the syllabus. They talk about theories of state.

These are western categories – Liberal, new liberal, Marxist, pluralist, colonists. So an Indian has to start memorizing, mugging up these theories to clear the exam.

The concept of justice is with reference to western thinkers – the idea of equality, and affirmative action – these are all western ideas. Now when one talks about rights, dharma is also about responsibilities. It’s not only about what’s my right to get this or to get that, but also about what’s my responsibility towards family, towards community, towards animals, towards nature – my responsibility towards various things, various people and beings. That is missing from the syllabus.

Also, we can see that under Indian politics there is nothing about Indian classical period or about India’s own indigenous ideas of politics. Other than Gandhism, which is sort of an interruption between various western models of politics everything else is imported and this is what the young students are expected to memorize and regurgitate in order to become civil servants.

Under the topic Indian government, it is as if there was no such thing as governance until the British. It’s only the modern state that is covered.

Then, under the heading methodologies in the study of international relations, the syllabus talks about idealist, realist, Marxist, functionalist and systems theory. Now who in India would even have heard of these things unless you go for one of these exams, sit down for several months and learn how to pass the exams, so in other words it’s almost like we are creating an alien group to rule over us.

So we are giving our young people an alien brainwashing to turn them into thinkers of a western lens so that they can rule over us and this is why the civil servants and civil societies is so disconnected from the aam aadmi.