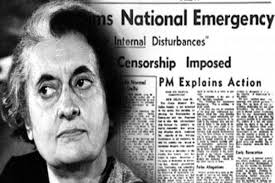 “The purpose of Newspeak was not only to provide a medium of expression for the world-view and mental habits proper to the devotees of Ingsoc, but to make all other modes of thought impossible. It was intended that when Newspeak had been adopted once and for all and Oldspeak forgotten, a heretical thought – that is, a thought diverging from the principles of Ingsoc – should be literally unthinkable, at least so far as thought is dependent on words. Its vocabulary was so constructed as to give exact and often very subtle expression to every meaning that a Party member could properly wish to express, while excluding all other meanings and also the possibility of arriving at them by indirect methods.”

This article, written in light of the observance of the forty-fifth anniversary of the darkest day in Indian democracy, carries a curious, almost jarring title indeed! The above title came as a disgusting shock to me as well when I happened to come across it a while back. In a critical essay on Indira Gandhi’s defence of the Emergency period published in the book An Anthropologist among the Marxists and other essays, the historian Ramchandra Guha pointed out a pamphlet carrying this very title which was published by the Indian High Commission in London to justify the imposition of the Emergency and redeem Indira Gandhi’s image in the global arena. The pamphlet was prepared by culling out and collating Mrs. Gandhi’s statements on the necessity of the Emergency. Not only was it a blatant lie in the face of international media, but it was also reflective of the latent paternalistic, colonial attitude of the upper echelons of Congress towards Indians as not being fit for having a democracy.

Emergency was imposed throughout India in the wee hours of June 26th, 1975, which gave the world’s biggest and most lively democracy a bitter taste of dictatorship and totalitarianism. It was the culmination of a nepotism which had roots and was being nurtured way back since the pre-Independence era of 1920s. But that’s a story for another day. Guha’s essay and his reference to Newspeak made me go back to Orwell’s classic as my homage to the people who bravely waded through the brutalities of the Emergency. Going through the statements of Indira Gandhi during the period, one realizes the inevitability of the complementarity of dictatorships and Newspeak. The confidence exuded during the statements is almost fascinating. They reflect the determination of the regime to redefine the paradigms of the ideas that govern a polity, and control the language that a society speaks, thus controlling the ideas that the citizenry cherishes. The dictator desperately attempts to turn its subjects into a single mould of its hand-maiden, such that the very identity of the latter fuses into that of the former, and flows from it. ‘Indira is India, India is Indira’, should not come as a surprise then.

One is awestruck by the sheer audacity of the High Commission in publishing such a pamphlet. The pamphlet was a solid statement of the Indian government indicating a lack of faith in the maturity of its own people. But this attitude was not restricted to government’s official spokespersons, but also the entire Congress party of the time. The unapologetic attitude of Indira towards the excesses of the Emergency years and support from many factions of the Congress for the period in hindsight, is a further affirmation of their belief in the correctness of the imposition. Guha notes that Newspeak was “a language that came naturally to Indira Gandhi”. Two days after the declaration of Emergency, Indira said that “the purpose of censorship is to restore a climate of trust”. A few months later, she confidently stated, “What has been done is not an abrogation of democracy but an effort to safeguard it.” In yet another instance she observed that “people are already being released almost every day”. And here goes the final of these ‘gems’ (as Guha terms her statements):

“If any change is required, it will be not to lessen democracy but to give more meaning to democracy, to keep democracy, to make it a more living democracy.”

Indira was absolutely sure of her “novel” intentions and stuck to her belief that she had rightly imposed the Emergency, notwithstanding its excesses, and that she had contributed her part in the shaping of Indian democracy. Indeed, she had, by making the nation acutely aware of the nature of dictatorships for the rest of its life! The remembrance of this anniversary is crucial because it cautions us to the sharp, dangerous turns that supposedly “benevolent” intentions often take. And this trait is no doubt best displayed by the doings of the Left regimes, ideologies and its supporters. Such groups begin to work towards the realization of their “benevolent” intentions by redefining and infusing new meanings into existing ideas to suit their purposes. It’s so ironic that Indira felt the compulsion to impose a dictatorship to “rescue a democracy from itself and maintain its democratic nature”.

Democracy Preserved should remain etched in our memories forever, and the stories of the Emergency should be retold time and again to the coming generations in order to make them aware of this most dangerous trait of fudging ideas and misleading an entire nation. Emergency came a fatal blow to the idea of India, and one must ensure that such a dark era in the history of Indian democracy does not repeat again. Also, worth taking note is the fact that there was a class of elites and educated middle class who fell into the trap of Indira’s Newspeak and genuinely started to believe that her actions were a steps towards improving the robustness of Indian democracy and were actually done in good faith for the upliftment of the masses. The general elections of 1977 were a vindication of the fact that the ‘dumb millions’ (as Mahatma Gandhi often respectfully referred to the Indian masses) were more intelligent and grasped the meaning of democracy better than their elite, educated counterparts. The support extended to the Emergency by these educated classes are textbook examples of how Newspeak misleads well-educated individuals into supporting authoritarian measures by inflaming their passions and “benevolent” intentions. As a lesson, we should always be self-reflective of our ideas and actions. This June 25th, let us ponder over this issue and also pay our respects to the foot soldiers of the RSS and other opposition parties of the time which came together to valiantly face the crackdown of the regime.