Denying the existence of the Saraswati River akin to denying gravity 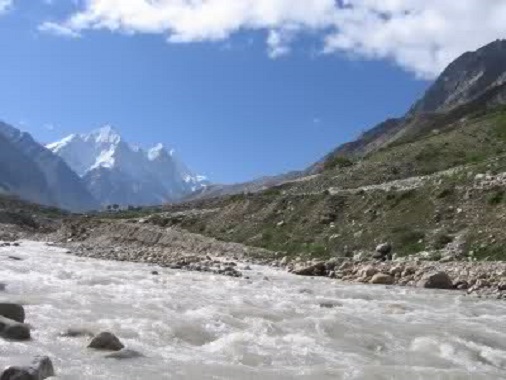 Since his retirement from a life of service at NCERT, Arjun Dev was in the forefront condemning the BJP textbooks. Arjun Dev wrote in an article that appeared in Mainstream, November 9, 2002 Pushing the Parivar View,[1] that Makhan Lal’s class VI textbook was “highly patriotic from the beginning.” This is a serious criticism since the earlier NCERT series assiduously avoided patriotism. However, this undoubtedly must seem like a strange critique for an American whose social studies textbooks are always highly laudatory of America’s historical record. In contrast, the common citizen in India was not allowed to fly the Indian flag until January 2002. Up until that time, when the law was finally changed, only diplomats and other government officials were authorized to fly the tricolour—a situation completely juxtaposed to the flag waving tendencies of patriotic Americans, for whom patriotic historical narratives are the norm. It is not surprising that books published during the BJP rule would attempt to instill a bit of patriotism in the populace.

In his critique of Makkhan Lal’s textbook, India and the World for class VI, Arjun Dev writes that the portion of “the history book that focuses on ancient India… begins with the Harappan civilization which we are told is also known as ‘Indus-Saraswati civilization’.”  Arjun Dev then makes a comment that squarely situates him in the school of scholars who refuse to look at the last five decades of archaeological research. These archeological digs have unearthed numerous sites along the banks of a long-ago desiccated riverbed that until 1800 BC, when it was disturbed by tectonic activity, ran from the Himalayas through Gujarat into the Arabian Sea.

[pullquote]There is overwhelming documented scientific evidence that a huge river did flow in that part of western India 3800 odd years ago.[/pullquote]

In the past few decades of research more Indus Valley type sites have been discovered in western India than are located along the Indus. For reasons tied up with ideological predispositions, there are many scholars, such as the twenty or thirty in the Delhi Historians Group, and a few others in western ivory towers, such as Michael Witzel at Harvard, who have staked their professional careers against the research emerging from Harappan sites in western India. These professors fight pitched battles in the media and on the Internet to oppose the idea and the nomenclature of the Indus-Sarasvati.

Arjun Dev quotes from Lal’s textbook, “It is also claimed that ‘many scholars think that Rig Vedic Culture and Harappan Culture are the same’ because of ‘various similarities like the same geographical areas, advanced nature of civilization and religious practices’.” Arjun Dev concludes,

While the identity of the Rig Vedic Saraswati remains uncertain, the claim of similarities in advanced nature civilization and religious practices in an invention of the ‘scholars’ of the Sangh Parivar. […] [T]he identification of the Harappan with Vedic is an essential component of the mythological ‘history’ of the Parivar that has received official sanction since the present government came to power.

The new textbooks were criticized by several scholars for using a map that showed the Harappan Civilization coterminous with the early Vedic Cultural area. However, the map of page 81 showing the “Extent of the Harappan Civilization” indicates the same geographical area as the map on page 25 in the book by Romila Thapar for class VI, Ancient India, published in 1987. Arjun Dev, along with Romila Thapar and other members of the Delhi Historians Group, take the tack that the on-going research into the sites found along the bed of that ancient dried up river in western India is inherently tainted, regardless of its veracity. So they try to downplay it. This politicization of the evidence is the source of blinders for critics such as Arjun Dev. A virulently negationist perspective of the archaeological discoveries that have catalyzed our knowledge of the civilization known as the Indus Valley is consistently used by scholars aligned with the Delhi Historians Group, such as Irfan Habib, who wrote:

“We are now shifting from ‘Harappan’ (the name so far given in official Indian Archaeology to the Indus Culture) to ‘Sarasvati-Sindhu’, thereby imposing on the Indus Culture a definitely Vedic nomenclature and thus warding off any non-Aryan pretensions. It matters little that the ‘mighty Sarasvati’ supposedly flowing down to the sea through the Desert is a sheer figment of the imagination with no support from geography or geology.”[2]

These are very strong words for a respected historian to use when data showing connections between the Indus Culture and Vedic Culture are quite astonishing. There is overwhelming documented scientific evidence that a huge river did flow in that part of western India 3800 odd years ago. But besides the facts complied by geologists, which Habib chooses to ignore and mock, he claims to be ignorant of the research and explorations of numerous archaeologists, from India and the West, that have revealed germinal similarities and overlaps between the artifacts unearthed along the not-imaginary dried-up riverbed of the Sarasvati and later attributes and religious practices of Hinduism. Perhaps Professor Habib can be excused for not being up to date in paleo-geology and satellite imaging, or even contemporary research on ancient Indian history, since his specialty is Medieval India, but it is surprising that, being thusly uninformed, he has taken such a strong stand.

[pullquote]These professors fight pitched battles in the media and on the Internet to oppose the idea and the nomenclature of the Indus-Sarasvati.[/pullquote]

Makkhan Lal mentions some of the cultural connections between the Indus Valley culture and Vedic/Hindu traditions in his rebuttal booklet addressed to Habib and the rest of the “Eminent Historians”. He wrote under the subheading “Vermillion in the Harappan civilization”

The occurrence of terracotta female figurines with vermillion in the hair parting from the archaeological sites of Mehargarh and Nausharo (both in Pakistan) in the context of 2800 B.C. is a well known fact. These have been published widely in archaeological books on Harappan civilization and have also been included in such books as ‘Ancient India’ (published in 1994) under the popular series of Time-Life on ‘Ancient Civilizations’. It is only the ‘eminent historians’ and secularists, who are pretending that no such evidence exists.

Arjun Dev wrote in his exposé of Lal’s textbook, in no uncertain terms, that

Makkhan Lal refutes this perspective in his rebuttal, under the subheading “Swastikas, Sivalingas, Folk-lores, etc.”,

The terracotta  objects like Swastikas, Sivalingas, Kamandalus[3], and the depiction of the pipal leaves …. are as brutal a fact as the rising of the sun in the east. These have been published in books and archaeological reports right from Sir John Marshall’s time. It is only the ‘eminent historians’ who obstinately deny their existence, exactly the way an ostrich buries its head in the sand and thinks that the world does not exist.

This is but a sample of the kind of shocking denial of the obvious despite overwhelming scientific evidence staring at these Eminent Historians in the face. And this denial begins more or less with L K Advani’s Rath Yatra in the early 1990s. The backlash from the Eminent Historians was expected and vicious. Indeed, after Advani’s Ratha Yatra, all writings and research about the Subcontinent were scrutinized for tinges of Saffron. Professors of South Asian Studies, including historians, anthropologists, Sanskritists, etc., who actually know very little about archaeology, were ready and eager to deconstruct and decenter India and disentangle the amorphous collection of sub-cults collectively called Hinduism from the horrors of nationalism. Professors were retroactively ‘Saffron-balled’ based on stereotypes or references to outdated or tangential sources, irregardless of the quality of their original (archaeological) research. In the case of Dilip Chakrabarti’s work, it was an exercise in awkwardness, since scholars wanted to cite his research, because it was solid, but they had to genuflect at the altar of academic political correctness. If that kind of behaviour wasn’t so damaging to the field, it would be amusing.

In the end, some of these scholars’ negationism about the Saraswati makes them seem foolish. Like denying the existence of gravity.

[2] From: The Rewriting of History by the Sangh Parivar, by Irfan Habib “(Founder-Head Centre for Advanced Studies in History Aligarh Muslim University & Former Chairperson,  (ICHR)”, first published in One India One People, 8 June 2001, and included in an electronic pamphlet sent via the internet to hundreds of scholars worldwide, from “The Delhi Historians’ Group” at JNU who, according to Dr. A.H. Jaffor Ullah “compiled [the] booklet and e-mailed it through electronic means to freethinkers, academicians, and opinion makers of South Asian descent”. Ullah wrote about the e-booklet in an article in the The Bangladesh Observer, July 8, 2002, Saffronization Of Education In India and provided the URL where he had posted the contents of the booklet at: http://cyber_bangla0.tripod.com/Delhi_Historian.html.