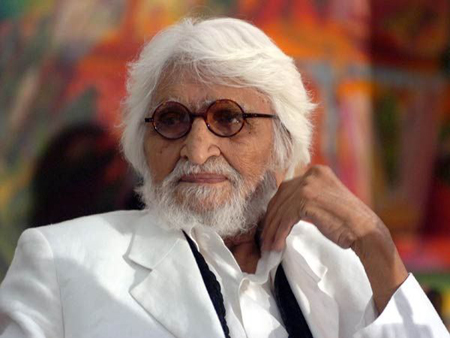 As the 2014 elections get under way, marking one of the most critical events in the life of our young Republic (also one of the world’s oldest civilisations), it’s time to take stock of how some of our intellectuals (desi secularists) are behaving in the debates that are taking place.

I use the term “intellectuals” in the generic sense, without going into the potential minefield of whether some of these people really deserve that designation. This is because “buddhi jeevi” in Sanskrit has very honourable and ethical connotations. And so, we can use terms like “analysts”, “commentators” et al if “intellectual” seems over the top.

Recently, a few of them have teamed up and issued a ringing declaration about how they perceive the dangers from a BJP-led alliance forming the government at the centre.  One of the “threats” from this future administration that these worthies have identified is the curtailment of artistic and cultural freedoms. The former Bombay painter of film-posters, M.F. Husain (hereafter MFH), is the figure our manifesto-wallahs have in mind as the iconic victim of repression and censorship  by the Indic civilisation movement. In the worldview of this bunch, MFH is nothing less than a contemporary male version of Joan of Arc.

When MFH departed from this world on the 9 June 2011, I couldn’t resist writing a short essay to my list of friends on the next day, summarising the main issues involved in the debate surrounding MFH. I focused specifically on the reactions from the circle of admirers and sycophants of MFH, all of whom were from the secularist camp or the SS (“sarkari secularists”, as I had labelled them) battalions.

Even now, this lot is singing the same refrain. I feel that the secularist high-priests again need to be told a few home-truths about their delusions and fantasies. How is it that creatures like MFH and Wendy Doniger are part of their pantheon, while any scholar or commentator who emphasises the accomplishments and glories of our ancient civilisation becomes a “Hindutva” proponent?

The most pestilential worm is the hookworm. The lowest of the low and the most despised.

Husain was the archetypal hookworm (the queen of the street-cats among the worms – and no apologies for mixing metaphors). He has no doubt become vitamin for the worms, as his faith dictates. Bully for him – whether the other worms would have survived a Husain diet is not something I am sure about.

Although I have always believed in John Dunne’s dictum of no man being an island and not asking for whom the bell tolls, since it tolls for thee, I found it difficult to be unhappy about the departure of MF. He was a waste of space and the universe became a manifestly better place without him.

A creature who took such sadistic delight in (gratuitously) insulting the sentiments of a billion human beings cannot and must not be adulated or deified.

I have always subscribed to the Vedic notion of a supreme “Brahman”. The Hindu movement has always accepted people like me as part of its pantheon and given me full space. It is the only “religion” that allows this supreme freedom : others, like Islam and Christianity, would have deprived me of vital parts of my anatomy and / or imposed other severe (albeit non-lethal) sanctions if I had not followed the diktats of their “holy” texts and their supreme leaders.

Therefore, I am outraged when the sentiments of my sisters and brothers in the Hindu movement who venerate various deities are trampled upon so despicably by hookworms like Husain and Doniger.

What bothered and angered me in equal measure in June 2011 was the reaction of the self-anointed desi intellectuals, press hacks, politicos and Page 3 denizens.  Now, I can understand the last three categories – they were born to be venal and egregious.

But the “intellectuals” – the “buddhi – jeevis“? Why does this wretched country produce so many academicians and thinkers who are either hallucinating or selling themselves to the local sabzi wallah ?  These low-lives were clearly in Saul Bellow’s thoughts when he wrote that “a great deal of intelligence can be invested in ignorance when the need for illusion is deep”. The caveat in this case: for the Indian secularists, the word “ignorance”  should be replaced by “disingenuousness” / or “subterfuge”.  Camus believed that an intellectual is a person whose mind watches itself. In these shores, intellectual minds watch Page 3.

It was amazing (and extremely disagreeable) that every single English broadsheet had MFH as the lead item on page 1 and also devoted 3-4 pages to him. Leading the parade of shame was the old Lady of Boribunder, as the Times of India likes to label itself. Nothing new about it.  The other rag from Delhi, the Hindustan Times, did the same.  As far as The Hindu is concerned, what can one say?

In all of them the same bunch of frauds and poseurs, with minor variations, were quoted as saying that the hookworm was India’s Picasso. What a travesty of truth and morality!  These unwashed hacks have never seen a Picasso or read anything serious about the true genius – the nearest they came to the icon was probably the perfume or the car bearing his name. Brother Pablo would have recoiled in horror had he been confronted by this obscene charlatan, MFH, or his pretentious  admirers. This gang should really be designated as “patsies” of the ruling classes, as the American playwright Lillian Hellman put it so well.

In this ancient country of ours, patsies are referred to as naukar – chakars.  As far as selling is concerned, they are always selling snake juice to the public and to their own group.

An interesting aspect of this SS core group is that many of them went to the so-called convent schools where they picked up a veneer of western (specifically Anglo-Saxon) culture, while conveniently forsaking their own civilisational roots.

Now, I would not like to generalise this phenomenon and make it an axiom.  I too attended some of these institutions in my formative years but never abandoned my culture and my historic moorings. Clearly, one’s family atmosphere and civilisational moorings are critical factors, but that would be a separate study by itself.  However, I would like to revisit some of the ideas I have expounded in some articles written on the theme of loss of one’s cultural roots. The great French-West Indian sociologist and psychoanalyst covered this subject exhaustively in his path-breaking work, Black Skin, White Masks (1952), which remains the standard reference till today. Fanon studied the feeling of inferiority and inadequacy that colonised people experience vis-à-vis their white colonial masters.

Fanon felt that the compartmentalised self-perception of a black person (or a brown person in our case) who has lost his or her indigenous cultural roots and has enthusiastically “embraced the culture of the “Mother Country”, inevitably produces an inferiority complex. These people then attempt to blindly imitate and internalise the culture of the coloniser. More importantly, especially in the Indian context, this type of craven admiration for the white man is more common in the case of upwardly-mobile and educated natives. We now have, here, an excellent summary of the mind-sets of our SS lot, the Jug Suraiyas, the Bachi Karkarias, the Arundhati Roys, the Ram Guhas, the Dipankar Guptas, the Romila Thapars, the Mani Shankar Aiyars and the whole jingbang lot.

Brought up on a diet of Billy Bunter, Enid Blyton et al, they are past masters at bowing and scraping before the white man’s High Table.  A compulsory element in their regular routine has to be the denigration of Indian civilisation and culture. Without that, there will be no crumbs thrown in their direction.  Any  Delhi resident like me gets glimpses of the antics of this bunch, week after week, at various get-togethers in the capital’s salon world.  While one can at least understand the logic of this conduct (from their viewpoint), what is impossible to divine is their rationalisation and defence of Islamic fundamentalism and extremism.

Certain pertinent questions arise when this lot stridently defend Husain’s antics and Doniger’s shenanigans. I am obliged to remind them that freedom of speech and liberty of expression are always circumscribed in any civilised society. Jug Suraiya is no scholar, but surely Doniger and company are aware of the landmark judgement of Justice Oliver Wendell Holmes (pronounced many decades back) that no one has the right to shout “fire” in a crowded theatre when there is no conflagration. In other words, there can be no dissemination of a false warning under the umbrella of free speech. This is a cogent analysis of the limits to freedom of expression. The relevant words in the Holmes judgment are : “The most stringent protection of free speech would not protect a man falsely shouting fire in a theatre and causing a panic. […] The question in every case is whether the words used are used in such circumstances and are of such a nature as to create a clear and present danger that they will bring about the substantive evils that Congress has a right to prevent.  (United States Supreme Court,  Schenck v. United States, 1919).

A more recent judgement of the American Supreme Court in 1999 says categorically : ”The First Amendment, however, does not protect certain limited categories of speech that are “utterly without redeeming social importance.”. . (Free Speech Coalition Case, 1999).

The former film poster specialist Husain’s paintings of Hindu gods and goddesses and Wendy Doniger’s pseudo-academic efforts fall under the category of “being utterly without redeeming social importance” by any rational standards. It is a no-brainer to understand that an individual has no right whatsoever (under any platform, whether legal, constitutional, moral or philosophical) to depict the deities of 1 billion people copulating with animals. It hurts when it is done. It morally outrages when it is defended and it provokes when it is encouraged.

When will the Indian SS lot grasp these basic truths ? Or will they continue to sip from their toxic goblets forever?