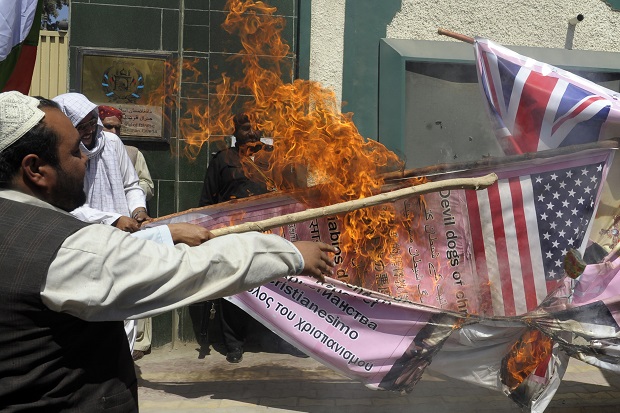 We are witnessing one horrific terrorist attack after another the world over and it shows absolutely no signs of stopping. Since 2015, there seems to be at least one incident in Europe every month.

In 1993, American political scientist Samuel P Huntington had talked about the Clash of Civilizations and that term still sticks 23 years later. (One Indian politician, who regularly spoke about this in India was the BJP’s former Deputy Prime Minister LK Advani.)

But what exactly is this clash? While Huntington put up this hypothesis in a Foreign Affairs article, it is defined succinctly on Wikipedia as: People’s cultural and religious identities will be the primary source of conflict in the post-Cold War world.

The 1990s was also the decade when Al-Qaeda caught the global imagination and a lot of commentators started talking about the Clash of Civilizations in terms of Islam’s clash with the West. While it seemed quite far-fetched at that time, it seems more realistic now in 2016, with a more brutal and ambitious Islamic State replacing Al-Qaeda as the world’s Number 1 terrorist group.

Meanwhile, a lot of Right wing groups have also risen all over the world calling Islam as their enemy.

But there are many reasons why a clash may have already begun.

1. America’s war with Muslim nations: A long time ago, the Roman Empire was the world’s sole superpower and it adopted Christianity. After the advent of Islam, we had the Crusades between the Christian and Muslim worlds.

The last great Islamic Caliphate was the Ottoman Empire and its collapse after World War I saw the Muslim world being severely disenfranchised. Today, no Muslim nation has even a fraction of that power. While the British Christian Empire was supreme till World War II, now it is the American Christian Empire.

The world’s Number 1 problem soon became Hitler after World War I and the West’s chief enemy was Communism after World War II. But the focus came back on the Muslim world after the collapse of the Soviet Empire in 1991.

Look at all of America’s major wars recently and you will see that they are predominantly against Muslim countries. If the first Iraq war had the backing of the United Nations, the second was a unilateral police action that led to the loss of more than a million lives in the long run.

Afghanistan was attacked and America has virtually turned Pakistan into a puppet state. Tensions with Iran continue and the nuclear deal is a temporary truce.

Turkey is the latest Muslim country to have turned and President Recep Tayyip Erdoğan accused America of harbouring alleged coup mastermind Fethullah Gülen on the US soil. Turkey is a member of NATO and wants to join the EU, but that appears in tatters now.

The US-Israel alliance is seen as a Christian-Jewish alliance by many Muslims and they hate that very much. Palestine is an extremely touchy issue for them.

Donald Trump’s anti-Muslim rant actually got him more followers and he’s already the Republican nominee for the upcoming US presidential polls. If he wins, then the clash will become even more pronounced.

Interestingly, in the above mentioned Clash of Civilizations, religious identity is just one part. The cultural identities of the Americans and the Muslim countries are as far apart as you can think of.

2. Rogue terror nations versus terror groups: The era of the terror groups has now made way for terror nations. I had raised this point in the article “Islamic State is a Country not a Terrorist Group”. US President Barack Obama and other world leaders are totally oblivious to the problem and are still ignoring it.

History has shown that when you either ignore or appease a horrific global situation, it only blows up in your face. The Islamic State is bent on provoking a clash between the Islamic world and the West and if they are not stopped in their tracks, then they will succeed.

The fault lines were never as clear as they are today. Iraq has already been torn into three regions: A Shia Iraqi government, a Sunni Islamic State and a virtually autonomous region of Kurds. Shias are being targeted in Pakistan. The Islamic State is targeting Shia Iran and has started conducting blasts near Shia mosques in Saudi Arabia, unheard of till recently in that country.

Also unheard of is: Saudi Arabia directly getting into conflict, this time conducting strikes against a Shia militant group in Yemen said to be backed by Iran. In fact, the highly stable country of Turkey has been destabilized too.

While we had the Iraq-Iran war in the 1980s, this time the Sunni-Shia fault line has gone global and taken much more alarming proportions

4. The total destabilization of West Asia and the Muslim world: All of the above has led to the total collapse of the Middle East. Iraq has virtually been split into three regions with the Islamic State being the most dangerous.

Iran is still reeling from the old sanctions (things will change really slowly after the nuclear deal with the US) and most of their leaders have a highly unfavourable view of the West. There are still tensions between the Army and the Muslim Brotherhood in Egypt. Yemen is in the midst of a civil war and Saudi Arabia is facing economic instability and numerous attacks by the Islamic State. Turkey has begun its confrontation with the West.

Syria is facing a deadly civil war and Libya is in ruins. Afghanistan in the midst of chaos and strife for a few decades now and Pakistan is a ticking time bomb. The Pakistani Army continues to back terror groups. The War in North Waziristan has claimed tens of thousands of lives. Many in Pakistan Occupied Karshmit (POK) want to join India and the Baluchistan independence movement is gaining momentum. The number of civilians killed in terror attacks in Pakistan since 9/11 crossed 50,000 some time back.

Add to this, the rise of Islamic fundamentalism in Bangladesh, resulting in murder of Hindu minorities and secular bloggers, and the issue of Rohingyas in Myanmar.

Things have never been so bad in the Muslim world in the post-World War 2 era.

5. The migrant influx into Europe: The disturbing trends mentioned above have started a chain reaction and one of the major fallout of this is the massive influx of migrants into Europe. This has created the biggest refugee crisis the world has witnessed, since World War 2. The influx of refugees has resulted in a religious and cultural clash across Europe, with the number of Muslim refugees, who have entered Europe crossing a whopping one million. Tensions have already begun with many people asking for a total closure of borders.

The governments are trying to suppress or sideline the issues of migrant crimes. But, this will not do any good in the long run. To avoid a clash, it is vital that the migrants are integrated into the European society as soon as possible, but, as of now, no such integration appears to be happening.

Add to this, the unexpected exit of Britain from the EU. Brexit happened because of a wide range of issues, one of them being the recent migration. European unity has never looked this thin.

The Left-liberal-intellectual lobby is extremely sympathetic to Islamic causes, which often borders on supporting Islamic fundamentalism, including its Jihadi variety. But, the Right, on the other hand chooses to confront Islam. A least talked about event is the spectacular rise of the global Right in the present decade.

In 2014, the Right-leaning BJP thrashed the Left-leaning Congress by a whopping 282-44 margin in the Lok Sabha elections. Both Israeli and British Prime Ministers Benjamin Netanyahu and David Cameron won unexpected victories after that. (Cameron’s replacement Theresa May also leans Right).

The National Front in France, Pegida (Patriotic Europeans Against the Islamisation of the West) in Germany, The Law and Justice party in Poland all are on the “Right” side of the political spectrum. Right parties and groups are rising all across Europe. Europe may just get their first far Right head of State: Norbert Hofer of Austria’s Freedom Party. And Trump’s rhetoric against Islam is well known and quite popular among his supporters. Make no mistake. The Right, unlike the Left, will confront Islam, making a clash inevitable.

7. The forgotten continent of Africa: Boko Haram is a deadly terror group which has pledged allegiance to the Islamic State. They are taking Christian groups head on and their offensives have led to the death of more than 20,000 and displacement of more than 2 million people across Nigeria, Cameron, Niger and Chad.

8.Rise of terror attacks: The average person is mostly never concerned with ideologies and political and religious clashes and usually prefers to remain aloof from all these issues. Yet, there is one thing, which is preventing this from happening: the Non-stop terror attacks across the world.

Till few years ago, the Western world was largely insulated from terror attacks, though they were very regular occurrences in countries like Iraq and Afghanistan. Even India has been a victim of terrorism for a few decades now. The western world had generally turned a blind eye towards all those attacks.

Today, it is no longer possible. The attacks in Europe are getting banner headlines everywhere; people are mourning for the victimized countries on Social Media and spouting slogans like “Je suis Charlie” (I am Charlie) after the Charlie Hebdo attacks.

To be fair to Huntington, in the famous Foreign Affairs essay, he did talk about various civilizations with only two of them being “Western civilization” and the “The Muslim world of the Greater Middle East”. But, he also stated that that interaction between Islam and the West is to be seen as a Clash of Civilizations.

He quotes our very own Rajya Sabha MP and Minister of State for External Affairs MJ Akbar: The West’s next confrontation is definitely going to come from the Muslim world. It is in the sweep of the Islamic nations from the Maghreb to Pakistan that the struggle for a new world order will begin.