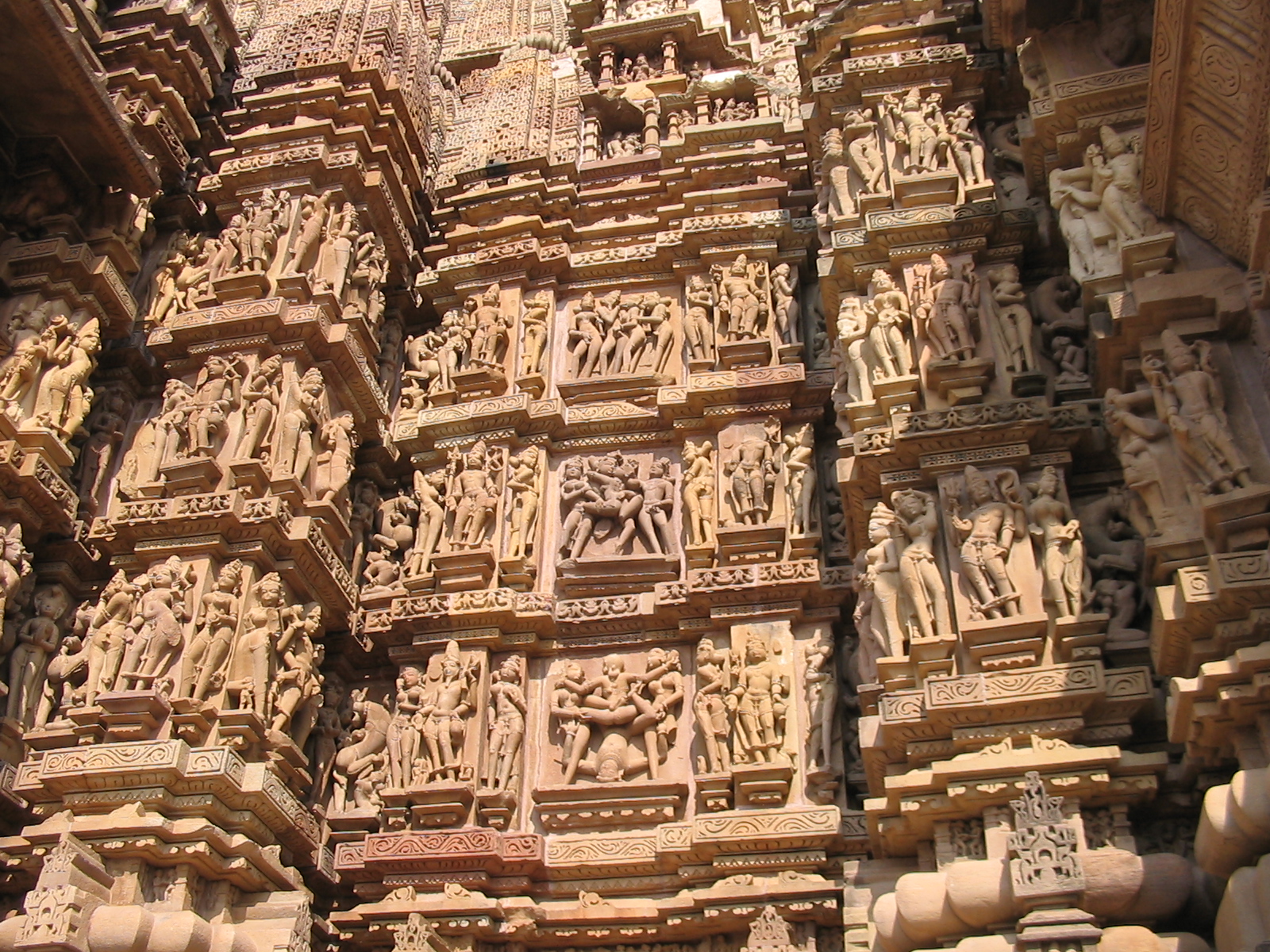 Sometimes people ask what Hinduism is, and how it compares with the other religious/spiritual traditions of the world. Most of the time Hindus find it difficult to provide simple and cogent answers to such questions, which can make other people doubt the validity of Hindu dharma.

I have compiled the following information highlighting key points that can be used to show to the uninformed person what Hindu Dharma truly is, and all the factors that it relates to, which go far beyond what other religions normally address.

The vastness, abundance and diversity within Hindu Dharma is a strength rather than a weakness, and places it far above more circumscribed beliefs. But this diversity needs to be explained properly and in detail for people today to understand, particularly for those coming from the background of western education or western religions who may have many misconceptions already.

Each of these paragraphs can be used as a basis for discussion.

Hinduism is the oldest continuous religious and spiritual tradition in the world, going back over five thousand years, with no specific point of origin historically. It is connected more with cosmic time cycles and eternal truth than it is with any historical person, revelation or community.

Hinduism is the third largest religion in the world with over a billion followers worldwide, comprising about one in every seven people on Earth. It has been one of the largest followed religions since its inception long before the other major world religions came into existence.

Hinduism is the largest of the non-Biblical and non-Abrahamic traditions, with only Christianity and Islam having more followers today. As such, it represents the non-Abrahamic religious movements of humanity, of which Biblical monotheism is only one.

Hinduism is the largest and oldest of the Dharmic traditions, comprising Hinduism, Buddhism, Jainism, and Sikhism and related spiritual traditions of India and Asia, which emphasize the pursuit of truth over any creed or dogma. More religions have originated in India than in any other country in the world.

Hinduism is the largest of the so-called pagan traditions, such as existed before Christianity and Islam arose, like the older European and Middle Eastern traditions, including the Greek, Roman, Celtic, Germanic, Slavic, Persian, Babylonian, Egyptian and many more.

A number of these pagan traditions have survived and several are being revived today. Hinduism can help in this renewal process as its continuity has remained unbroken.

Hinduism is the largest of the native and indigenous traditions of America, Africa, Polynesia and other parts of Asia, including many oral traditions, which are rooted in nature and the Earth rather than any human revelation. Hinduism encourages the preservation of native traditions and can help us understand the deeper spiritual meaning of their rituals and view of the sacred.

Hinduism, though primarily found in India and Nepal, historically has spread throughout Central Asia, Indochina and Indonesia, and aspects of Hinduism came with Buddhism wherever it went as far as Japan, which still has many temples to Hindu deities today.

Hindu and Vedic related traditions from the Zoroastrian to the Greek, Roman and Celtic spread west through the Middle East to Europe in early ancient times. The largest traditional Hindu temple complex is Ankor Wat in Cambodia, showing that Hinduism is not just an India based but a universal and global tradition.

Hinduism is the largest of the world’s pluralistic spiritual traditions, honoring many paths to God or truth, and many names and forms of the Divine. Hinduism therefore easily blends in with pluralistic social traditions, such as found in democratic traditions today.

Hinduism is a dharma or way of truth that places individual spiritual practices through ritual, Yoga, mantra and meditation over any particular belief, faith or institution. In Hinduism truth is even more important than God, whose best definition is the eternal truth.

Hinduism is not a local formation or limited to one community of believers or practitioners. It calls itself as Sanatana Dharma, the eternal and universal truth that is relevant to all beings and arises from the cosmic mind itself.

Hinduism is beyond all views of monotheism or polytheism, teaches us to see the Divine in everything as the power of universal consciousness. Hinduism cannot be put into the straightjackets of western theological thought.

Hinduism formulates itself as Manava Dharma or a teaching for all human beings. It has never divided humanity into believers or non-believers, or one religious community as against another. It has never rejected any portion of humanity as condemned by God or the Divine, but teaches that all living beings must eventually return to the highest state of bliss.

Hinduism has the largest number of temples and shrines of any religion, with numerous temple complexes and temple cities built over thousands of years, as well as many local and home-based shrines. It also has the greatest diversity of temples and shrines in terms of different types of construction, formation, forms and images.

Hinduism has the largest number of monks and priests of any religion, with extensive religious orders of Swamis, yogis and Sadhus, more than two million in India today. It also has the oldest set of religious orders, priests and gurus, with lines and lineages going back to before the time of Lord Buddha.

Hinduism has the largest number of teachers, gurus and holy men and women of any religion. It emphasizes living teachers over teachers and prophets of old. Hinduism says that God-realization is the right of every human being.

Hinduism has a greater variety of religious and spiritual teachings than any other religion in the world. There are perhaps more religions inside of Hinduism than outside of it. These include even atheism and agnosticism.

Hinduism has more names and forms for the sacred and Divine than any tradition, including extensive traditions of iconic worship and formless approaches that use no murtis. Hindu deities routinely have chants to them of a thousand names. Yet Hindu dharma also honors the nameless and formless, the infinite and unbounded.

Hinduism has the most festivals and holy days of any religion, with some lasting as long as ten days. Hinduism has its own sacred calendar that directs us to spiritual practices on a daily basis and tells us the unique spiritual qualities of each day of the year.

Hinduism is the most tolerant and syncretic of the worlds major religions. It does not aim at outer conversion but at inner spiritual practices, and regards the same One truth as capable of innumerable manifestations relative to different times, places and persons. Hinduism has both a universal orientation and a local adaptation.

Hinduism does not promote any single religious belief but rather encourages us to pursue the exploration of consciousness as our real spiritual quest. It places individual spiritual practices over any en masse belief.

Hinduism has the most detailed philosophy and psychology of any spiritual tradition in the world, with numerous systems of Yoga, Vedanta and Tantra, covering every angle of the spiritual life and quest for higher consciousness.

Hinduism recognizes that each individual soul can realize Divinity as one’s true Self and inmost consciousness, and does not regard as any teacher, messenger, prophet or savior as final. It teaches that your true Self and the universe are one.

Hinduism rests upon honoring each individual as Divine and all nature as sacred. It does not demand conversion, but directs us to understand and respect ourselves as we are according to our own inner being.

Hinduism is the most prominent spiritual tradition in the world emphasizing Self-knowledge gained through Self-inquiry over any person, form, name, book or deity. It regards religious or spiritual practice as various approaches to Self-realization, not as ends in themselves. It understands our true Self as beyond both body and mind, as well as time, space and karma. This takes it far beyond the limitations of western psychology.

Hinduism rejects ideas of sin and salvation, heaven and hell. It states that our main problem is spiritual ignorance that is overcome by knowledge born of meditation. It teaches that each soul is originally pure and one with the universal Being, with the ultimate origin and goal of all as Supreme Bliss or Ananda.

Hinduism is rooted in the Sanskrit language, arguably humanity’s greatest language based upon a science of cosmic sound. Hinduism has numerous mantras, chants and prayers, more so than any other religion.

Hinduism has the main literature and tradition of Yoga, including all aspects of Yoga as knowledge, devotion, service, and methods of both Hatha and Raja Yoga.  Hinduism contains many Yoga lineages from the greatest Yoga gurus like Patanjali, Vasishta and Yajnavalkya and the great Natha and Siddha Yogis.

Hinduism has the largest philosophical literature of any religion or country, comprising every shade of dualism and non-dualism, theism and non-theism, worship of the Divine as One or Many. Hindu philosophy examines the whole of life and the nature of knowledge on all levels, inner and outer. It includes many schools of Vedanta, Samkhya, Yoga, Nyaya, Vaisheshika, Mimamsa, Purana and Tantra, including modern teachers and their new insights.

Hinduism has the largest and broadest set of teachings of any religion extending into philosophy, mysticism, yoga, psychology, medicine, science, astronomy and astrology, art, literature, dance, music. It embraces all of human life and culture and excludes no aspect of learning as unsacred. Hinduism teaches us how to make any vocation, way of knowledge or culture into a spiritual path or way of Self-realization.

Hinduism has the largest literature of any spiritual tradition exploring and mapping higher states of consciousness beyond the physical, extending to the entire manifest universe of body, life, mind and intelligence. Hinduism describes in detail the many levels of the universe beyond the physical, extending to the Absolute beyond all time and space.

Hinduism has an understanding of time extending to vast cosmic cycles of billions of years, such as recognized by modern physics, and is not bound to any limited historical perspective. It teaches us that life on Earth is influenced by such longer cosmic time cycles.

Hinduism recognizes vast realms of spaces and numerous worlds, both physical and in the astral and causal realms, extending far beyond what science has yet imagined. It says that our current humanity is only one of many over time. It holds that intelligent life inhabits the universe as a whole and is interrelated in many ways that we can access within our own consciousness.

Hinduism finds holy sites everywhere in nature. It honors all nature as sacred. Hindu sacred sites can be found in mountains, rivers, forests, deserts, rocks and sea. It has mapped the sacred sites throughout the Indian subcontinent since ancient times. Such are the sacred Ganga River or Mount Kailash in Tibet. Yet Hindus can find sacred sites in the nature everywhere that they live.

Hinduism sees the human body itself as a temple of Divinity reflecting the structure of the universe through the chakra system. It has a deeper understanding of the subtle energy and thought patterns behind our physical form, such as science is only beginning to note.

Hinduism as Sanatana Dharma, a universal and eternal tradition of Self knowledge and cosmic knowledge, is the least divisive of any religion. It does not divide us by community but directs us to discover our inner unity.