An exposé of Mother Teresa’s deceptions and demagoguery 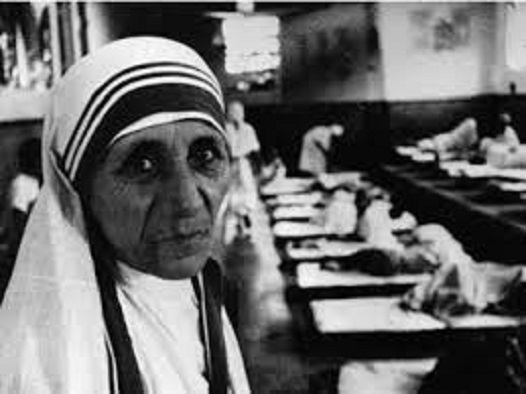 The Indian Christian United Forum (ICUF) has launched a slanderous propaganda in Bangalore as reported by IndiaFacts. It claims that the priest of the Kāḻi temple persecuted Mother Teresa when she founded the Home for the Dying in Calcutta. However, when the priest became diseased, he was shunned by the Hindus. Teresa then cared for him and the Kāḻi priest had a change of heart. In his dying moments he said with folded hands, “For thirty years I have worshipped the Goddess Kali in stone, but today the Goddess Mother stands before me alive.”This is an iconoclastic rejection of Kāḻi as mere “stone” as well as an affirmation of Teresa as the real “Goddess Mother.” Is this a true story or a slanderous propaganda? Let us examine the facts.

At the outset, we are not told two important things: What was the name of this alleged priest? In which year did Teresa care for him? Had the Kāḻi priest really had such a transformation as is alleged, the church and the sympathetic media would’ve had a field day advertising it. They didn’t though. Remember that Teresa was always eager to seek publicity, if necessary, by inventing an outright lie. As the rationalist Sanal Edamaruku points out, Teresa lied that she ran a school for 5,000 students in Calcutta whereas no such school ever existed. It is hard to believe that Teresa and her sycophants were unusually publicity-shy on the transformation of the Kāḻi priest.

The story comes in many versions and has every mark of a fabricated myth. In the propagandist pamphlet Love: The Words and Inspiration of Mother Teresa, with a foreword by the Bible-thumper Desmond Tutu, the persecuting Kāḻi priest is portrayed as dying of tuberculosis (p. 21). In Joseph Langford’s propaganda,Mother Teresa’s Secret Fire: The Encounter that Changed Her Life and how it can Transform Your Own, the Kāḻi priest and the people of Calcutta are portrayed as the ungrateful persecutors ofthe altruistic Teresa. However, one day, the Kāḻi priest becomes afflicted by leprosy and is dying: “He was put on the street by his own family and shunned as unclean by his fellow priests. As soon as Mother Teresa heard about him, she went looking out for him. She found him and took him in, and began tending to him herself, without a word of reproach (pp. 104-105).”

The Kāḻi priest’s alleged affliction inexplicably changes from tuberculosis to leprosy between these two versions. But the iconoclastic rejection of Kāḻi as mere “stone” as well as an affirmation of Teresa as the real “Goddess Mother” had not yet been invented. Both versions are silent about it. The ICUF adds this colorful detail to complete the slanderous propaganda.

One needn’t have any doubt that the source of this fable is Teresa herself. How can we be sure? The foreword to Langford’s propagandist version was written by Father Brian Kolodiejchuk, director of the Mother Teresa Center, a longtime associate of Teresa,postulator of the cause of beatification and canonization of Teresa, and the Vatican-approved compiler of her letters. Had he not been convinced that the source of the fable is Teresa herself, he wouldn’t have written the approving foreword.

[pullquote]The rationalist Sanal Edamaruku points out, Teresa lied that she ran a school for 5,000 students in Calcutta whereas no such school ever existed. [/pullquote]

An incredulous and incorrigible Teresa admirer would deny that Teresa could’ve unscrupulously lied. But she has been caught lying too often. In addition to Sanal Edamaruku’s exposé of her bogus claim we saw earlier, one may list two examples from Aroup Chatterjee’s Mother Teresa – The Final Verdict, pp. 273-274, 277-278 to prove that Teresa was a repeat offender. In her Nobel acceptance speech, Teresa atrociously claimed that she had taught the beggars of Calcutta the “temperature method” to naturally prevent pregnancies. She claimed that in Calcutta alone, in six years, slum-dwellers and beggars have had 61,273 fewer babies by following the “temperature method” she had taught.

Chatterjee, a medical doctor,thoroughly debunks this claim. This method, even to be moderately successful, requires a woman to maintain a chart of her basal body temperature. Less than 2 per centof female beggars of Calcutta are literate. Isn’t it strange that this illiterate population accurately read the thermometer in English and maintained a chart inside their dilapidated shacks?Who distributed several lakhs of thermometers to them without anybody noticing it?How did Teresa know that her alleged campaign resulted in precisely 61,273 fewer babies in Calcutta?This only shows that Teresa could be precise in her imaginations and audaciously lie in full glare of a sycophantic media.

This figure had doubled itself in eighteen months. In June 1981, while in Washington D.C., Teresa claimed that her “beautiful method” had resulted in 134,000 fewer babies in Calcutta alone. This time she opted for a round number – thereby proving that Teresa was a well-rounded liar. In a 1982 Scottish television interview, Teresa claimed that her methods had resulted in “one million less babies in 10 years in Calcutta.” The number had miraculously grown from 61,273 to 134,000 to one million in just a few months!

In November 1995, Bishop Vincent Consessao had invited Teresa to participate in a protest demanding reservation for Christian Dalits. He had given her a detailed program. Teresa agreed and joined the protest in Delhi. However, due to undisclosed compulsions, she made a volte face. She called for a press meet and denied that she had ever participated in a protest demanding reservation for Dalit Christians. She then claimed that she had thought that she was participating in a prayer session when she sat in protest in Delhi. How convenient!

These examples demonstrate that Teresa was a brazen liar. Therefore, it is no surprise that she unscrupulously lied and fabricated the fable about the Kāḻi priest. But what could’ve been her motive? One must turn to the origins of her Home for the Dying for the answer.

[pullquote]Teresa atrociously claimed that she had taught the beggars of Calcutta the “temperature method” to naturally prevent pregnancies.[/pullquote]

Home for the Dying was founded in Calcutta in 1952. Teresa was already quite influential by then and had the backing of the local government, which usurped the pilgrim shelter belonging to the Kāḻi temple and handed it over to Teresa (see Kolodiejchuk, Brian: Mother Teresa – Come Be My Light, The Private Writings of the “Saint of Calcutta,” pp. 144-145). How does one deflect attention from this illegal property-grab by a well-connected, cunning missionary? Teresa instinctively knew how: by falsely portraying the Kāḻi priests as the persecutors arrayed against an altruistic missionary.

There is another reason too: Kāḻi herself. No other deity invokes revulsion in the Christian mind as much as Kāḻi does. She is repeatedly reviled as the “goddess of death and destruction” in Christian writings. Even today, American school textbooks denigrate her as “bloodthirsty.” In Langford’s book, cited earlier, she is called an “evil goddess who devours her husbands – for whom the legend suggests the city was named.” Even the unpleasant heat and humidity of Calcutta is blamed on Kāḻi’s “hot breath (p. 27).” Teresa implicitly called Kāḻi “the devil” and vowed to liberate the people of Calcutta who were allegedly “soiled with sin” from the devil’s clutches. (videher letter cf. pp. 49 and51 of Kolodiejchuk’s book).

What invokes thisirrational fear and revulsion though? Kāḻi is the antithesis of the Christian idea of god. The Christian god is male and misogynistic. Christianity teaches a woman to blindly obey. It doesn’t have the notion of the sacred feminine. Its view of feminine sexuality is negative. Even the Virgin Mary had to be stripped of her sexuality to be made into a mere intercessor. In contrast, Kāḻi is independent, assertive, and at ease with her sexuality. She could deal with evil men – if necessary by force. She represents every facet of the divine feminine: a comforting and kind mother in times of peace and a warrior archetype that could rise to the occasion when the evil threatens peace.

Christians couldn’t relate to this idea of the empowerment of women. Women didn’t enjoy much freedom in the Christian West until a few decades ago. So, Christian westerners found the feminine empowerment that Kāḻi signified threatening. So did Teresa, who had always been submissive to authority. She was once accused of indulging in a prolonged and intimate sexual liaison with a powerful Catholic priest. The church authorities thought she was guilty (see pp. 55 and 63 of Kolodiejchuk’s book). They transferred her to Asansol in West Bengal as punishment; the male priest wasn’t punished. Teresa faced daily humiliation when her superiors closely monitored even the personal letters she wrote. She was denied even a modicum of freedom.No reasonable or independent woman would’ve tolerated such abuse of her freedom and honor. Teresa, on the other hand, willingly submitted to misogyny by resorting to the typical missionary position.

So, it is no wonder that she was threatened by the independent and empowering Kāḻi. In Teresa’s jaundiced worldview, Kāḻi had to be reviled. She was. Calcutta, its Hindu residents, and the priests of Kāḻi too were guilty by association. Calcutta – because it derived its name from Kāḻi; its Hindus and Kāḻi priests – because they worshipped Kāḻi. One could falsely implicate them without feeling the slightest remorse.

That is how this slanderous propaganda came into existence. It would be one of many lies the presumably virgin Teresa gave birth to.Western Christians lapped up this false propaganda with relish and amplified it by their vivid imaginations. The black-skinned Kāḻi could only be the devil when seen through their racist prism. After all, in Christian iconography, Jesus had always been a Caucasian male. How could the divine be a dark-skinned, assertive female? They were only too happy that one of their own, a white Teresa, was rescuing the heathens from the clutches of the devilish Kāḻi.

[pullquote]No other deity invokes revulsion in the Christian mind as much as Kāḻi does. [/pullquote]

One cannot rewrite the past. One can only learn lessons from it to create a harmonious future. India’s Christians have a moral reckoning to do. Christians arrived in Kerala from Syria sometime in the 6th century as refugees and traders. Hindus not only accommodated them but also allowed them to flourish as a community. No attempt was made to convert them to Hinduism. Instead Hindu kings gave them grants to preserve their religious practices. That is how the Syrian Christian Church came into existence. India’s Christians have two choices in front of them. They could either continue to glorify an unscrupulous, lying, cunning missionary who slandered the Hindus and their Gods, and continue to spread the lies she invented or reciprocate 1,400 years of Hindu hospitality by rejecting demagogues like Teresa.I hope reasonable Indian Christians would reject Teresa and her vicious demagoguery.

Kālī: The Mother of vīra-s