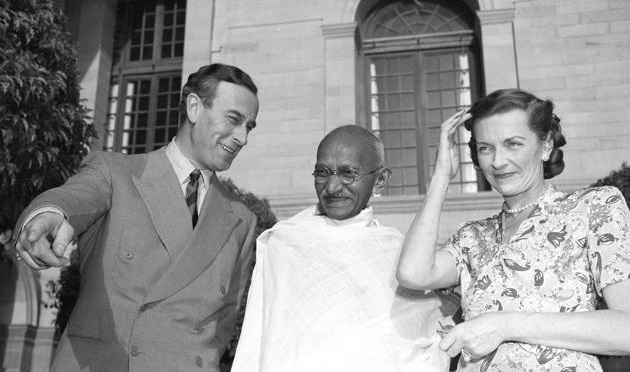 2019 is the year the world celebrates the 150th birth anniversary of Mohandas Karamchand Gandhi. A question does need to be asked: do the common people of the world really know this “man of peace”? First, let us list what many have long assumed to be true within India itself. That he brought India freedom. That he gave the world the gift of non-violent resistance. That he brought the British Empire to its knees in India, and made them leave. These descriptions have been swallowed up, with little knowledge of how he has been critiqued within India itself. Unfortunately, most of the praise directed at Gandhi is not only false, but is also an outright lie.

Gandhi’s assassination 71 years ago in late January 1948, for various reasons that we don’t need to visit here, turned him into a martyr that he never deserved to be. [1] The vivisection of India by the British, using their Islamist oriented feudal elites and the British created Muslim League, along with some of the empire loyalists’ nominal Hindus in the British created Congress party, can be blamed largely on the empire friendly machinations of Gandhi and his large supporting cast. The cruelty and barbarism that accompanied the partition of India made Gandhi possibly the most hated man in 1947 India, which eventually became what is now three separate nations. By handpicking Nehru, an unpopular and deracinated “brown sahib” (the Indian version of “Uncle Tom”), Gandhi’s rebranded image as a saint was steadily pushed onto the public through the Nehru dynasty friendly media and the education system, which continue to whitewash Nehru as well.

The Empire’s western media and universities also participated and often led in this whitewashing effort, with real critiques mainly available for scholars, who mostly toed the official line. The layperson should learn an important lesson here: having an elite western university accreditation is the perfect smokescreen to continue the Gandhi myth. This trend has continued through empire loyalists and dynasty sycophants like Ramchandra Guha, whose recent book on Gandhi was described by one writer in The Guardian as craven. Cowardly. [2]

Today’s younger generation may not realise that all through modern India’s independent period including as recently as the mid-90s, public criticism of Gandhi carried big risks. Brave were the writers who could survive threats to their careers, if not their lives, and write honestly about both Gandhi and Nehru. We are indeed fortunate that courageous writers exist, even if they had to publish their work in obscure places, or publishing houses with lower mass reach, while surviving continual personal attacks on their reputation. It will take time and a reclaiming of the education system, before the public can be sufficiently informed to take action and bring down every statue, and rename the innumerable roads, public programs, and institutions that carry his name. Efforts by certain African nations to take down his statue can be applauded, with the caveat that they should have greater clarity about what exactly they are rejecting. A nation and a world that idolises false heroes will struggle to progress.

The critiques on Gandhi that are publicly available today are extensive, so let us focus on just a few salient points that should have given the layperson some hints about this “Mahatma”. His initial life from his time in South Africa as a young lawyer till the early 1920s already expose him.

Firstly, was the early Gandhi even mildly familiar with dharma and Hindu teachings? By various accounts, the answer is an unequivocal no. As writer Radha Rajan pointed out [3], there is no precedence in Hindu teachings of using passive resistance or non-violence against an enemy with whom this does not resonate. “…he was not a scholar of Hindu texts with knowledge of precise words to be used for specific concepts. English words like ‘soul force’, ‘love’ and ‘passive resistance’ denote Christian ideals, and while Christians may claim (incorrectly, in view of the Crusades, colonialism and the slave trade) that these are the defining features of their faith…”.

In short, this “great leader” of the Hindu native lands was unfamiliar with Hindu teachings, yet preaching with great conviction and eloquence. As multiple writers have pointed out [4], Gandhi’s selective and muddled interpretation of ahimsa itself confirmed his illiteracy.

Secondly, what was his actual track record in South Africa? When even Ram Guha now announces that early Gandhi was a racist, one might be grateful for such tender mercies and a “balanced assessment”. Yet, Guha is actually letting him off lightly. Telling oppressed Africans and Indians to engage with the tyranny of the church and its western European subjects who carry out the criminal repression is neither in line with Indian teachings, nor helpful to the oppressed. It merely and most usefully helps the oppressor channelize dissent in the colonies, to the safety and benefit of the Empire. Here Gandhi plays the role of “controlled opposition” to the highest level. However, simply calling him a racist is hiding something far more sinister, that controlled opposition is another word for empire loyalist. If it suited the British Empire to have their decorated war veteran Gandhi appease native Africans, then he might have adopted a most charming demeanour towards them. Over-emphasis about race or caste by Gandhi critics misses this key distinction. [5]

Thirdly, what was his view of natives who genuinely stood for their native lands, and were willing to exhort the masses to violently fight back? After all, the British army in India was largely comprised of native Indians on the payroll. By the mid-1940s, they were finally able to wake up and reject their British superiors, being inspired by another popular leader (Bose) who was not “Gandhian”, and who was in fact side-lined by Gandhi from the party leadership.

One has to keep in mind that the word native should be seen in a similar lens with the fightback of the native African and the native American tribes against the church and its colonialists. While true blooded patriots (or nationalists, rebranded as “extremists” in most school textbooks, with empire loyalists packaged as “moderates”) like Tilak, Aurobindo, Savarkar, Lala Lajpat Rai, Chidambaram Pillai [6], and a long list of several others were being tortured in prison, hanged, bankrupted, brutally killed, shunted off to exile or plea bargained into silence, Gandhi’s own abysmal response on their treatment, while exhorting the Hindu masses to maintain non-violence, appears bizarre, to use a euphemism. Gandhi was essentially discouraging native resistance, and leaders who have followed him in history and exemplify his teachings or were inspired by him were also playing similar roles. Leave aside India, can the African or the African-American public think of any big name Gandhi-esque leaders preaching non-violence, but just happened to be playing to the empire’s tune? This realisation is not easy to digest.

Fourthly, Gandhi’s pandering to the Islamists of India had a disastrous effect, something that we are living with even till today. Deep thinkers such as Sita Ram Goel have stated that the average Muslim’s character is no worse or better than the average Hindu, but it is the fundamentalists themselves that are one of the biggest hurdles to unity. Gandhi meanwhile went all out to engage and whitewash them, and did very little to help the common Muslim by his refusal to insist on reform, truth and reconciliation, given that most of the Muslims in India were former native Hindus. He must have known that he would not have lasted very long if he took that line with the Islamist feudal elites, or for that matter, the British. If anything, Gandhi’s dealings made the situation for moderate Muslims worse, as they had nowhere to turn to escape from self-serving fanatical minority leaders. As legendary historian R.C. Majumdar stated: “…(Gandhi) did incalculable harm to Hindu-Muslim unity by putting a premium on Muslim intransigence…” [7]

His statement about “Hindus as a rule being cowards” (written in 1924) also indicated that he had a very poor understanding of the native Indian resistance to the invasions. While many nations that converted to Islam did so within decades (Egypt, Persia are just two of many examples), the former Hindu-Buddhist-Tengrist natives of Afghanistan and Central Asia (Turkestan) took close to four centuries to fully convert by the 11th century, after long periods of violent resistance to the inflicted slavery and other atrocities. Meanwhile, it took five centuries for the Islamists from largely now converted central and western Asia to even set up a sultanate in Delhi in 1206 C.E. After six more centuries, by 1800, the estimated Muslim population of (greater) India was no higher than 15% [8]. Exactly which Hindus were the cowards that Gandhi was referring to?

More recently, the sheer atrocities perpetrated in the Malabar region by the Khilafatists in the 1921 Moplah massacres did nothing to dissuade Gandhi from his appeasement policies. [9] What would Gandhi have done with ISIS, their slave markets and mass rapes in the current decade? If 1921 is anything to go by, we already know. He’d be making excuses for them, while suggesting that their victims welcome them. It is a good thing that the people of today’s Syria and their leaders are not “Gandhian”. In short, Gandhi was illiterate about the incredible courage and resilience of the native Indians; he also had little knowledge about the nature of Islamic expansion into India and Asia.

Keep in mind, the above are only a few examples taken till 1924. Gandhi before age 55, the great soul or “Mahatma”, was an illiterate coward who should have been fully rejected by the public who were being subjected to the social media of that time, which was the British controlled press, radio broadcasts and the early days of television. Somehow the few true patriots within the Congress party leadership also knew better than to cross him.

The next time you hear opportunistic politicians like George Galloway shouting about Hindu nationalists killing this “great soul”, who pretty much every partition victim of every community wanted to harm, stop for a moment and realise that Galloway himself is a gatekeeper to the truth. As is Suzanna Arundhati Roy, whose rants about race and caste at no point informs the public that Gandhi was very much an empire loyalist. This type of opportunistic cowardice is lucrative. Gandhian.

If the British weren’t so busy burning records on their exit out of India, perhaps there would be much more apt and confirmed descriptions for Gandhi. Here is one that has been whispered in India for decades: stooge.