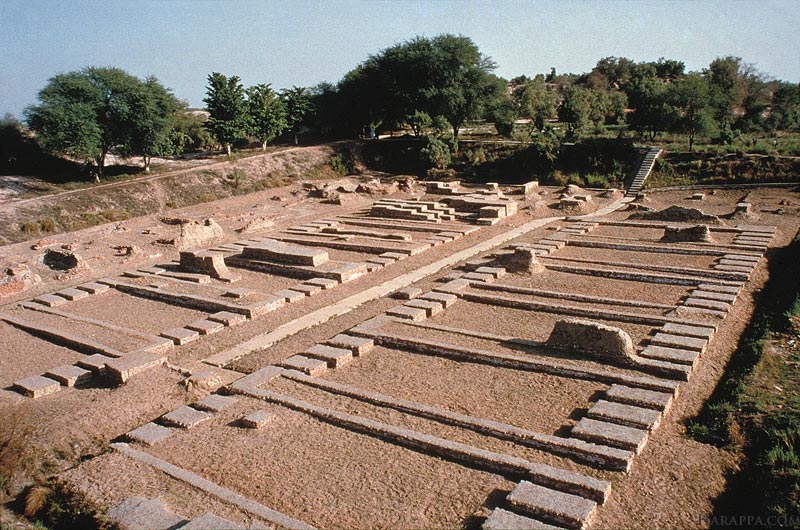 The Harappan/Indus seals, as tiny as 3”/3” with a picture of single horned bull and some unique symbols inscribed has remained a mystery because the symbols have remained undeciphered. The seals which were in use around 3500 years back coexisted with Indus civilization and has been correlated with Vedic culture. The central social activity of Vedic period was the performance of Yajna (sacrifices) that are detailed in the Vedas, conducted and performed by the priestly class who were initiated into Vedic studies and practices. Many sites of Harappa and Lothal have structures that correspond to the divisions of yajna shala. The artefacts and figurines of Indus period are also depicted in the seals as symbols.

This write-up will compare the actual site hitherto called “Granary of Harappa” and its depiction in a seal in a symbolic miniature form. The layout and the disposition of the photograph of Harappan site presented in picture 2, can be seen in a miniature form in one of the Harappan/Indus seal presented in picture 1, along with other symbols. The new interpretation of the first symbol on the seal (Picture 1) is that it is a miniature representation of the Harappan site for carrying out a purification or Shuddhi ritual called “Janyabhayapanodana” performed at the excavated platform of Vedic arena, at the beginning of big yajnas. The site also shows the various divisions that were part of the Pasu vedi where animal sacrifice took place as a preliminary to big yajnas.

Picture 1. Harappan seal with the symbol of Vitritiyadesha inscribed as first symbol.

Picture 2. The site of Vitritiyadesha at Harappa site.

The first symbol on the seal (Picture. 1) appear to be the miniature plan picture of the hitherto called “Granary of Harappa”, even though the site has not shown any evidence of grains or the storage bins in the area. The site (see picture 2) shows a brick structure built in an area of 45/45 meters with many sub structures within like a path way, rectangular blocks, stepped structures, animal sacrifice shed, and so on. On either side of the pathway are 6 brick structures in rectangular shape with three small divisions on both the eastern and western sides. The central passage has a narrow path laid with bricks which leads to stairs on one end and a small rectangular pit on the other end.

The disposition of the site correlates with Mahavedi, and with sacrificial arena called “Vitritiyadesha”, which leads to the view that this is a place where a ritual of big yajna called “Nirudha Pasubandha” was performed. Pasubandha was the model pattern of the sacrifice of a disemboweled animal, an independent rite, performed every six months, and takes two days, first day of preparation and the second day of immolation. Six priests were engaged.

“Janyabhayapanodana” is a purification rite that was performed on the western side of Vitritiyadesha to drive out the danger or negativity emanating from the priests/men.  It is performed at the initial stage by kicking out a ball of earth or dirt with leg outside the Vedi at the beginning of Soma yajna where many priests participate.  This is classified under Shuddhi, where after the physical cleaning called Bahya-Shuddhi of body by a bath, the internal cleansing – Abhyantara, is observed that signifies inner cleaning for a total purification of the priest.

Picture 2 and 3 is the actual site of Harappa, which has all the 10 divisions of the vedi for animal sacrifice mentioned below and are numbered in the image. One can understand how the priests had to purify themselves before taking part in any vedic ritual. Some vedic terminologies that are associated with the rite are numbered in the site picture and furnished with details.

Before the commencement of yajna, the six priests, after the initial physical cleansing of bath had to perform a ritual of internal cleansing for driving away the negative thoughts of the mind so that they become totally purified and are eligible to perform a yajna. A mud ball of earth or dirt was kicked out with leg outside the vedi (Apasthambha sutra 11.7.2).The numbers indicated are according to the details mentioned above and its location in the site picture.

The procedure of yajna was as follows:

The above mentioned Harappan site is actually a Vedic arena for rituals involving altars, fire sanctuary, vitritiyadesha, and shamitra shala for conducting Nirudha pasubandha ( model form) animal sacrifice,  where the immolation of a goat took place as a preliminary of big yajnas. All priests had to undergo a purification rite before the commencement of Yajna in Vitritiyadesha. The details of it are documented in the Harappan seal as a symbol in miniature form.