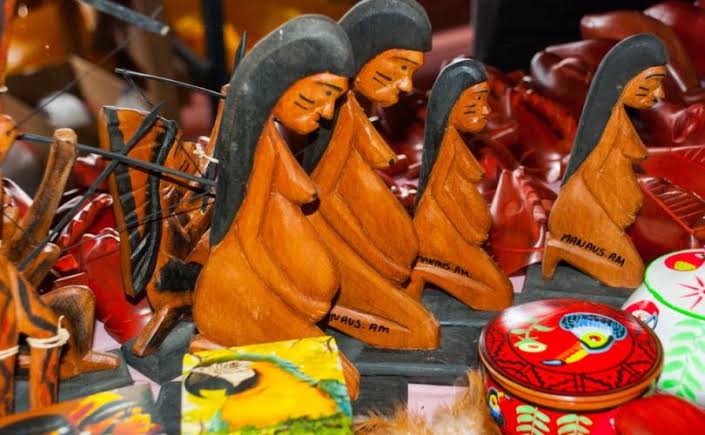 The Pope was recently embroiled in controversy when five icons of Pachamama, the traditional deity of the Andean people of South America, were included in a prayer service in the Vatican.[1] This episode should be properly seen as another example of how the church tries to appropriate indigenous religious traditions in order to subvert them even while being extremely wary of a pagan or polytheist revival.[2] Goddess Pachamama[3] has also been a symbol of the indigenous people’s movement in Bolivia where a Christian fascist coup has taken place to topple the indigenous-led government.[4]

Upon looking at the map of today’s world, it becomes clear that Abrahamic monotheist religions like Islam and Christianity dominate over many countries. However, this world order did not come about overnight. Nor was it an entirely bloodless process.[5],[6] History is written by the victor and, therefore, much of today’s extant school-taught history is tainted by the bias favouring the victorious Abrahamic monotheisms. The Abrahamic faiths have always operated like medieval empires or mercantile corporations, continuing until the present day. They have little patience with things like respect for the sacred or reverence towards the ancestors. The so-called “beliefs” imposed on their followers are no different from the ideologies of political parties. Still, it should be noted that the imperialist hegemony[7] of monotheism does not exist without its fault lines as the fear of a worldwide pagan spiritual revival always seems to appear on the horizon.

A brief examination of history reveals how innumerable pagans gave stiff resistance to conversion and how the monotheist religions eventually came to dominate certain parts of the world. Also, as writers such as Ram Swarup and others have pointed out, alongside acknowledging some major cultural differences, it is nonetheless important for Hindus to study and encourage the revival of all ancient, indigenous, pagan religions.[8]

In briefly reviewing the early history of Europe, it can be seen how the Roman Empire slowly transformed from being a pagan empire that worshipped deities such as Jupiter and Mars into a Christian theocratic state in a span of around 400 years. In the interim, people like Porphyry of Tyre, emperor Julian (who ruled for 20 months beginning in 361 C.E.) among others tried valiantly to restore the status of the ancient pagan, Hellenistic religion. However, their attempts ultimately ended in failure. In 380 C.E., the fanatical Christian minority[9] influenced emperor Theodosius to enact the Edict of Thessalonica.[10] With this edict came about the complete ban of paganism in the Roman empire, the desecration of pagan temples and persecution of pagans[11] with the penalty of death. A hundred years following this, the Western Roman empire itself ceased to exist after being overrun by Germanic tribes.[12] This marks the beginning of the so-called period known as the dark ages of European history which was to last for nearly a thousand years.

The dark ages marked a period where Western Europe underwent a cataclysmic shift as the ancient culture, knowledge and sophistication embodied in the Roman empire gave way to semi-barbarism under the rule of Christianity. Throughout mankind’s history, the rise and fall of civilisations has been a common theme even since prehistoric times. The world has seen mighty civilisations flourishing for thousands of years – like Assyria, Egypt, Rome etc. – followed by their sudden collapse amidst chaos and barbarism that has sometimes lasted for centuries.

Leading Christendom in the height of the dark ages was the militant Christian king Charlemagne of the Franks who ruled in the 8th century. Much of his life was spent in leading military campaigns against the pagan Saxon tribe who heroically resisted conversion leading to a 30 years’ war.[13] Charlemagne even ordered the mass execution of 4500 rebellious Saxon nobles in one instance.[14] Later on, between the 12th and the 15th centuries, Christendom undertook further military campaigns against the pagans in the form of Crusades against the Northern tribes including the Baltic, Finnic and West Slavic peoples.[15] The hardy Baltic Lithuanians were the last tribe in Europe to accept Christianity in the 15th century after having gallantly resisted the violence of conversion for over 300 years.[16]

Pagans in the Islamic world

In Mesopotamia, the pagans of the city of Harran (known to the Romans as Carrhae) – a venerated seat of learning that housed an ancient temple of the moon deity, Sin[17]– held out against conversion to Islam for nearly 400 years. They identified themselves with the Sabians, mentioned in the Quran, to gain the protection of the Islamic rulers as a “people of the book”. During the late 8th and 9th centuries, Harran was a center for translating works of astronomy, philosophy, natural sciences, and medicine from Greek to Syriac by Assyrians, and from there to Arabic, thus transmitting the classical knowledge to the Islamic world.[18] In around 1032 C.E, the moon temple of the Sabians was destroyed and the city of Harran was wiped out  by an uprising of the local rural ‘Alid-Shiite population.

However, alongside the contributions of the Harranians, philosophers like Al-Kindi, Al-Farabi, Ibn Sina (Avicenna), and Ibn Rushd (Averroes), among others, also began to expound the Neoplatonic and Aristotelian viewpoints between the 9th and the 12th centuries. These philosophers of the falsafa school[19] infused ancient Hellenistic thought into their writings. Al-Kindi even came up with an original theory of music[20] with influences from Greek musical theory. However, later orthodox Islamic theologians like Al-Ghazali condemned followers of falsafa as apostates and this school of philosophy eventually became extinct in the Islamic world. Nonetheless, over the course of time, some of the falsafa works went on to be translated and circulated in Christendom. Ultimately, this helped in retransmitting the ancient, Hellenistic knowledge back into the Christianised West.[21]

The Renaissance and the Enlightenment

The Renaissance, which began sporadically in various places over several centuries, signalled the end of the dark ages. The term “Europe”, derived from the name of the Greek deity Europa, came back into usage to refer to the European continent during the Renaissance. Prior to this, the term “Christendom” was much in vogue. Many prominent Renaissance thinkers and philosophers became deeply influenced by the ancient Hellenistic pagan authors. The Neo-Platonist scholar, Plethon of the late Byzantine era,[22] completely rejected Christianity and advocated the revival of pagan religion. In the meanwhile, the Church cracked down on anyone who deviated even slightly from Christian thought. The Inquisition, which was created to persecute heresy during the 13th century, continued to function in various parts of Europe even until the 19th century.[23] In India, thousands of Hindus were persecuted in the Goa Inquisition led by the Portuguese colonialists.[24]

Despite the initial Christian opposition, mathematics and science eventually bloomed in the West. One of the major early boosts towards this was given by the Hindu numeral system, in use in India for thousands of years, which was carried to Europe by the Arabs. This numeral system came to be adopted widely in Europe by the 15th century, replacing the unwieldy Roman numeral system.

As the Renaissance came to an end and the period of the Enlightenment began, more and more thinkers began to reject the dogmas of Christianity. In 1717, the Irish philosopher, John Toland,[25] became one of the founders of an organisation known as the Ancient Druid Order, which sought to revive the tradition of the ancient Celtic druids.[26] Also, famous philosophers such as Spinoza, Nietzsche, Emerson, and Whitman embraced the aesthetic and intellectual aspects of pagan thought. Monotheist religions such as Christianity and Islam have laid down the doctrine that man must overpower and dominate nature. However, most ancient and indigenous systems of knowledge, including Hinduism, emphasise a model where humans have a harmonious and reverential attitude towards nature. This latter mode of thinking made a comeback in Europe during the Enlightenment.[27]

The fear of a pagan revival is almost always writ large among those monotheist believers who regard with suspicion any allusions to a pre-monotheist, pagan past of many deities and natural religions.[28] This paranoia could perhaps be justified because of the innate appeal of the ancient spiritual religions. The Mullahs and preachers must constantly issue threats of the direst consequences including hellfire after death and excommunication or being killed for apostasy[29] while being alive. Among the abusive epithets used to describe pagans or polytheists include witchcraft, satanism, mushrik etc. The word pagan itself began as a term of derision as it originally meant “rural bumpkin”.

Thus, Abrahamic monotheism tries to achieve a sort of totalitarian mind control among its believers against getting involved with paganism. Ironically, the stressful modern urban lifestyle in most countries leads people away from tolerating such primitive ways of mind control and into seeking solace in some form of spirituality. True spirituality can only be found in the natural religions. This is the basis for the fear expressed by the Pope in his recent diatribes against pagans.[30]

Since ancient times, science and technology had flourished in civilisations such as India, Japan, China etc. which possess unique, indigenous cultures and philosophies. In the West, only wherever and whenever the dogmas of Abrahamic monotheism have been challenged, has scientific progress been made possible. At the same time, sadly, it has to be noted that the scientific and industrial progress seen in much of today’s modern world has also resulted in severe ecological damage and the splintering of society into atomised individuals.

One of the reasons for this is that the modern education system has largely ignored or contributed to damaging the ancient institutions of family and community. Also, the dharmic, pagan and indigenous systems of thought have been largely left unharnessed. Alongside achieving development and progress, the modern world needs to revive and restore the family, the community, and the natural religions in order to overcome the social atomisation and ecological destruction which are ultimately the consequences of unrestrained greed.

As has been noted by Koenraad Elst and others,[31] pockets of revival of paganism are showing up in many Western countries. Also, the voices of indigenous peoples from Latin America[32] are finally being heard as they slowly overcome the legacy of centuries of colonialist domination. It can be reliably stated that the revitalisation of the Hindu traditions of India[33] will send a strong signal of encouragement to all indigenous, pagan peoples worldwide.

[11] “Christian persecution of paganism under Theodosius I”

[12] The Eastern Roman empire continued to exist for a thousand more years before it too ceased to exist and was replaced by the Islamic Ottoman Empire.

[17] “The Celestial Temple of Sogmatar: A Sacred Site Dedicated to Sin and the Planets”

[18] Pingree, David Erwin. (2002). The Sābians of Harrān and the classical tradition

[24] Sharma, Jai. “The Portuguese Inquisition in Goa: A brief history”

[30] “Pope at Mass: ‘So-called Christian societies will end if pagan’”

[32] Evo Morales Ayma on Twitter: We started the month of Pachamama with a thank you offering. During each Friday of August, we perform this ritual to thank the generosity of the Mother Earth. These offerings are part of the identity of our people.

[33] The historic Ayodhya Ram Mandir judgement in India is a turning point in the history of the Hindus of India as they overcome the shackles of 1000 plus years of colonial rule. “Why Didn’t Hindus Give Up Ram Mandir?”