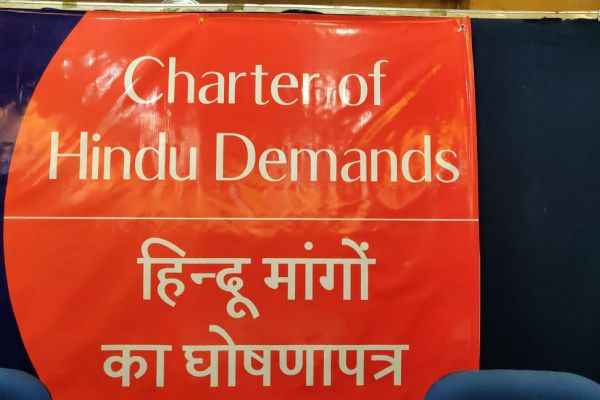 “India is, the cradle of the human race, the birthplace of human speech, the mother of history, the grandmother of legend, and the great grandmother of tradition. Our most valuable and most instructive materials in the history of man are treasured up in India”.

Did Mark Twain ever imagine that one day Hindus, who are major repositories of this great Indian civilization have to struggle for bare minimum rights to assure dignified survival of their civilizational ethos ? Well, nobody had ever imagined this for sure, but today’s reality is much grimmer than ever before for Hindus. Hardly a day goes when we are not forced to digest life hounding debates on “equality” and “secularism” through media and intellectuals circles. But, surprisingly enough, status of Hindu rights somehow remains not discussed in these so called intellectually driven impartial debates. From Constitutional constructs to legislative policies hardly any of them assures discrimination free environment against Hindus. To be more precise, the most glaring example on this ongoing discrimination comes from our very Constitution, where under Part III, the construct of Article 29 and 30, that ensures protection to minorities to not only conserve their culture but also to establish and administer institutions of their choice, runs with the faulty presumption that majority (Hindus) are self sufficient and require no such Constitutional safeguard for protecting their culture and institutions. And miseries of this blatant discrimination doesn’t ends with the Constitution, even on the count of administrative policies the manner in which administration of Hindus temples have been hijacked by the Government is truly appalling and worthy of condemnations. So the present draft of “Hindu Charter Demands” is indeed a ray of hope and an appreciable step in the sense that atleast someone has stood up to protest against this ongoing discrimination against Hindus and made some concrete efforts to channelize the grievances of Hindus into meritorious demands based on facts rather than just being rhetoric about it. But, are those demands sufficient to convey justice to Hindus? That is the question which needs to be asked. What if I told you that the present draft of the “Hindu Charter Demands” lacks comprehensiveness and it also suffers some flaws relating to it’s construct? So here are certain worth noticing demands that needs to be included in the present draft of Hindu Charter.

1. Demand to insert new fundamental rights in the Constitution.

Demand to insert new Article under Part III of the Constitution.

a) That ensures protection to demographic stability of Indian Sate.

b) That ensures protection to Indian civilizational ethos and dharmic traditions.

2. Demand Indian government to move proposal in UN regarding cultural genocide under International Covenant on Civil and Political Rights (ICCPR).

Indian government should move proposal in United Nations to demand insertion of new clause under ICCPR against cultural genocide. So as to ensure international recognition and protection for different cultures who are numerically less in number and are under the constant threat of mass conversions and genocides.

Places of Worship Special Provision Act, 1991 is the biggest impediment in reclaiming Hindu temples that were destroyed and mosques were built upon them by Islamic invaders. Enactment of this law is the finest example of Colorable Legislation, introduced with the ulterior motive to muzzle down the surge of reclaiming Hindu temples after Ayodhaya movement. And not only this it also deprived Kashmiri Hindus to reclaim more than hundred temples that were demolished by Islamic jihadists during the genocide of Kashmiri Pundits in 1990. This law is blatantly discriminatory and goes in contravention to Article 14 and 21 of the Indian Constitution and hence needs to be immediately repealed.

4. Demand to have National Remembrance Day in the memory of 200 million Hindus that were slaughtered during foreign invasions.

India is the only country which feels hesitant in acknowledging the sacrifices of people that stood for the protection of Indian Civilization and fought against foreign invasions. There is no parallel example in history to support this attitude of reluctance. From Jewish Holocaust to World War sacrifices no one has ever shown any reluctance in recognizing the sacrifices of their people. As per established records of history around 200 million Hindus lost their life during brutal massacre by Islamic invaders. There is no parallel figure that could match this magnitude of suffering and genocide till date. But still the most unfortunate part of the story is that we have no National Remembrance Day in the memory of those fallen heroes.

5. Demand to build Holocaust Museums / Memorials projecting the atrocities which Hindus had gone through during foreign invasions.

Along with the declaration of National Remembrance Day, the next important initiative that needs to be taken is to build Holocaust Memorials in all those parts of India which had witnessed major genocides of Hindus in the hands of foreign invaders, like Kashmir, Goa etc. So that it should be imprinted in the memories of Indians that such kind of butchery and barbarism must not be repeated again.

6. Demand to build separate National Archive database that contain authentic records of atrocities committed against Hindus since the invasion of Islamic invaders.

Constant and deliberate negationism of butchery and barbarism of foreign invaders against Hindus in academic circles and mainstream media is no more a hidden secret. It is therefore very important to have a separate National Archive Database that should contain the authentic records of atrocities that were committed against Hindus by foreign invaders. So that no one ever dares to question this reality.

7. Demand Indian Gov’t to establish a watchdog Commission to monitor the human rights of Hindus across the globe and annually publish report in this regard.

The recent case of Asia Bibi and forceful conversion of Hindu girls in Pakistan gave us a contrasting difference about how much attention Hindus really get when it comes to their human rights. They are being constantly ignored in compare to people of other religion. This blatant discrimination needs to be ended and India being a repository of largest Hindu population holds legitimate locus standi to address and monitor the grievances of Hindus across the globe. Therefore demand to set up a watch dog Commission by Indian gov’t in this regard is not an exaggerated expectation.

8. Demand to impose absolute ban on religious conversions in tribal and scheduled areas because they are more prone to allurement and deception.

Beyond any shadow of doubt tribal and schedules areas of India are more vulnerable towards allurement, undue influence and fraud than any other section of society. Due to economic, social and educational backwardness they essentials require special protection. Reasonable classification in this regard has already been legitimized by the Constitution, so the only thing that remains left is to enact anti-conversion law that ensure protection to their right of self determination, thereby imposing absolute ban on religious conversions in this regard.

9. Demand to constitute Rehabilitation Centers for the victims of religious conversions.

10. Demand to introduce separate offence under Chapter XX of IPC regarding inter-religious marriages that actualizes through fraud and deception.

Inter-religious marriages that are actualize through fraud and deception, where the accused person has fraudulently hides his real identity or religion or forces her to change her religion after marriage must be made punishable separately under Chapter XX of the Indian Penal Code. Moreover burden of proof in such cases must also be placed upon the person who is accused of exercising fraud and deception in actualizing inter-religious marriage.

Recent incident of rebranding of ancient Indian traditions like “Pranayam” into some “Cardiac Breathing Exercise” is alarming and equally concern-worthy. Similarly using of photographs of Jesus Christ sitting into yogic postures is an act of blatant fraud and copying of Indian Dharmic tradition without paying due acknowledgement and royalty to the real source. And therefore needs to be strictly punished in the name of plagiarism and circulation of such things must also be strictly regulated.

12. Demand constitution of special courts for matters relating to “Illegal Migrant Influx” and also provision to ensure speedy trial in such cases.

The unnecessary delay in the deciding the cases related to illegal migrant influx and absence of special courts / tribunals in this regard increasing the danger of demography change and conflict in society. Moreover the limited presence of resources is also threatened towards extinction due to the illegal migrant influx which would result in grave injustice to the native population of the area concerned. Hence need to be effectively countered through enacting laws and constituting special courts / tribunals in this regard.

13. Impose tax burden and other liability twice than normal on those who are illegally settled in India.

People who are illegally settled in India are increasing up the pressure on the natural resources of the region concerned and therefore must be held accountable for more liability than usual. And their accountability could be fixed through imposing greater tax burdens on them. This will certainly compels them to rethink about their illegal settlement and more importantly acts as deterrence for those who are planning to illegally settle in India.

14. Expand the scope of Sedition law with respect to any disrespect to National Flag, National Song, National Anthem and working against unity and integrity of India. Moreover it should also be extended to acts of political and economic corruption.

The sedition law needs a complete overhauling, first it requires to be defined in clear terms and it’s scope must be extended to activities which demean the repute of nation by any means whatsoever. Moreover proven acts of political and economic corruption must also be made punishable under Sedition laws.

Settlement of Kashmiri Hindus in the same areas from where they had been forcefully ousted is nothing less a cruel joke. As a pre-requisite to ensure social protection to Kashmiri Pundits, there separate settlement in J&K State is a must thing to do. Moreover new provision regarding special protection to Kashmiri Pundits and other minorities of Kashmir under AFSPA Act must also be inserted. So that no one ever dares to repeat brutalities against Kashmiri Hindus.

16. Demand to give special reservation to Kashmiri Pundits in J&K State.

Due to continued ousting of Kashmiri Hindus for almost 30 long years their sense of belongingness needs to be rebuilt again, both economically and socially. And this which can be assured by providing them special reservation in gov’t jobs in J&K, so that they can regain their roots though economic upliftments and social security.

17. Demand new provision under “Unlawful Activities Prevention Act” that suo moto acknowledges crime against Kashmiri Pundits as an act of terror and should be made non-bailable till the disposal of case. Genocide of Kashmiri Hindus in 1990 met with zero convictions this is not only a breach of their faith in Indian judicial system but also create trust deficit towards Constitutional Authorities, who were meant to assure their social protection. Therefore it is high time to come forward and ensure legal protection to Kashmiri Hindus by inserting new provision Unlawful Activities Prevention Act, that suo moto acknowledges crimes against Kashmiri Hindus as a terrorist act.