Holi as Kaamotsava: The age old Hindu festival of Love 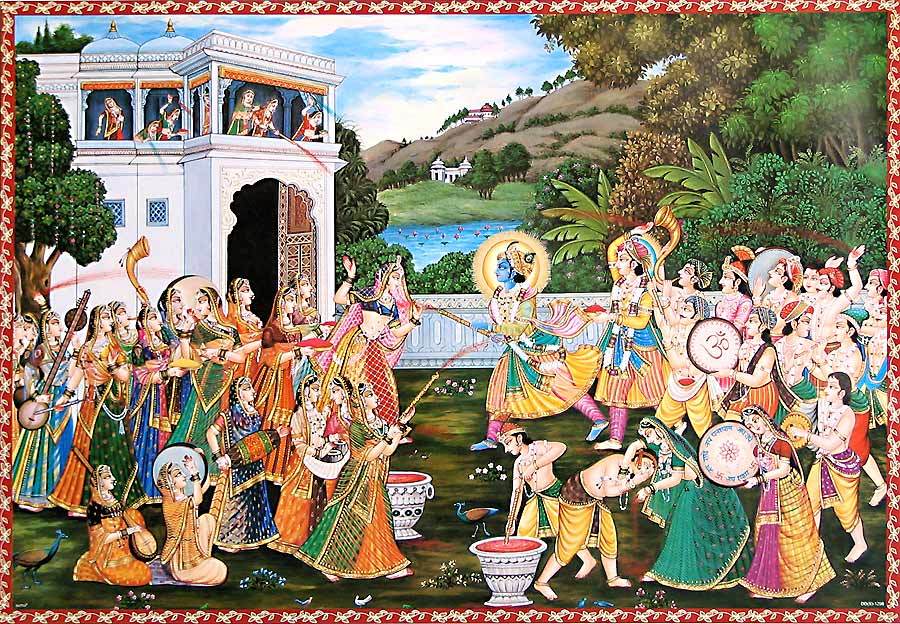 Legend of the origin of this festival of Kaamotsava or its name does not take it back to some obscure saint or saints who are found not to have any connection with romance or love. Its connection with romance is not attributed to some king of 14th century either. It is not just celebrated by lovers and couples married through love affairs.

The ‘bonfire’ is Kaamadahana reenacted

One of the most well-known surviving events of the festival is the ‘bonfire’ the day before the festival. This bonfire is now being interpreted differently by different celebrators all over the country.

Those who call the festival ‘Holi’ view the bonfire as Holikaadahana. The mythological narrative associated with this takes us to the story of Prahlada, the devotee of Vishnu. That Prahlada was punished by his asura (demonical) anti-Vishnu father Hiranyakasipu, for being firmly devoted to Bhagavaan Vishnu, and that Prahlada was saved by Vishnu at every instance of such punishments, is well known. As per a folk narrative version of this story, Holika, Prahlada’s evil aunt, tricked him into sitting on a pyre with her. Holika was wearing a cloak that made her immune to injury from fire, while Prahlada was not. As the fire roared, because of protection to Prahlada from Vishnu, the cloak flew from Holika and encased Prahlada, who survived while Holika burned. The bonfire on the day before Holi is a reenactment of this event.

But those who view the festival as originating in the above mentioned story of Kaama, Kaama, the ‘god’ of love being burnt to ashes by the ‘fire’ of ‘third eye’ of Shiva, view the bonfire as reenactment of this Kaamadahana, i.e., Kaama getting burnt. From this point of view, the reveling in the form of throwing colors on each other, singing, dancing and so on, on the day following the bonfire, is viewed as the reenactment of Rati, all the ‘gods’ and all the creatures bursting into a rapture of cheers and reveling losing themselves completely in that joy at the rebirth of love. In the four south Indian states of Karnataka, Tamil Nadu, Telangana and Andhra Pradesh, the local name prevalent among the common public in reference to the bonfire is Kaamadahana only. That is the only name they know as the name of this event. In some areas of these states, Rati’s wailing is also reenacted. Dushiyanthini Kanagasabapathipillai notes in an article that “In Tamil Nadu songs are sung on Holi depicting Rathi’s extreme sorrow.”

In my place of birth, in the southern parts of Andhra Pradesh bordering with Karnataka, the funeral procession of Kaama’s death and the wailing by Rati, the wife of Kaama is also re-enacted with the participants of the procession all male, one in a female widow’s costume and the remaining in a white male attire enacting the wailing paradoxically to a fun comic effect merging the mood into the reveling mood of the festival. The procession with the ‘corpse’ is taken from door to door and the group uses the wailing sounds to ‘blackmail’ the male friend to join the group. Huge processions of bullock-carts carrying holi colour liquid, inaugurated by the top government officials, travel through all the big streets of the town with a din of drum beats. Though the place technically falls under Andhra Pradesh, songs sung are all Kannada.

In some places, bordering with Karnataka, even the event of Shiva burning Kaama through the fire of his third eye is reenacted. A pit is dug at the place where there is a pre-installed Shivalinga at the bottom of the pit, an effigy of Kaama is installed inside the pit, at a distance from the Shivalinga, fire is sent in the form of a flame-arrow from a small toy-bow made of bamboo stick, towards the effigy and the fire burning Kaama’s effigy is grown into the huge bonfire as in all other places. I found a similar ritual in some parts of Maharashtra too.

The full moon of Love

These names, as well as the names like Kaamuni paNDuga, Kaamana Habba, Kaaman PaNDigai, are words widely prevalent especially in traditional households and among rural people. This provides two clues: one, the tradition is deep rooted in the grass roots culture of south India from ages; two, this is also the reason why the elite, the modern/urban educated south Indians are not aware of the festival being part of south Indian culture, and instead, take the name of the festival to be Holi, and view it as a north Indian festival.

Kaama as a pan-Indian expression

The word Kaama and the ‘god’ indicated by it are not unknown to north India. In fact, the word Kaama used in south India in reference to the festival are Sanskrit words and as such is found in all Indian languages as an inheritance in some languages and as a borrowing in some other languages from Sanskrit. In Sanskrit literature and literatures of various regional Indian languages all over India, right from the ancient times, the word Kaama and all its huge number of synonyms such as Madana, Manmatha, Manoja, Ananga, Bhaavaja etc. occur regularly and frequently in the context of narrations /descriptions of love and sexual desire in heroes, heroines and other characters of narrative poems. Love and sexual desire in these poems almost invariably are described as (born of) the ‘arrows’ of Kaama. Generation of sexual desire in an individual and the resultant pressure of biological and mental drive are described as the ‘pain’ of being hit by the ‘arrows’ of Kaama.  Kaama is said to have five different aphrodisiac flowers as his arrows. ‘Flower-arrowed’ (Pushpa-baaNa) is one of his names. Kaama has Sugar cane for his bow, which obviously is the sweetness of the Kaama (Love/sex). All these descriptions are cleverly and creatively used by poets for narrating/describing love and sex in their narrative and non-narrative poems euphemistically. Kaama is an example of how Indic ‘gods’ are, in fact, real, experiencable entities, intimately experienced by all human beings.

Kaama is very closely associated with Vasanta ritu (spring season) in all these descriptions. Vasanta, like Kaama is a ‘god’ and is considered to be the best friend and eternal associate of Kaama. Vasanta is also called as Madhu (lit. honey). Vasanta (spring) season is called Madhu (honey) season.

Vasantotsava or Celebration of Spring

In the south, many kings celebrated Vasantotsava, with that name, on a very grand scale. One of the Reddy dynasty kings of 14th Century, by name Kumara Giri Reddy had a title “Vasanta Raayalu” as a recognition of his grand Vasantotsava celebrations. His famous Sanskrit treatise on classical dance by name “Vasantaraajeeyam” is named after his title that refers to his Vasantotsava fame, not after his actual name. Fame of Vijayanagara kings for their grand Vasantotsava celebrations is well known. Many deities such as Sri Venkateswara (Balaji) of the world-famous shrine Tirumala are called as Vasantotsavapriya and the festival is one of the most important calendrical festivals at these shrines. This seems to be a pan-Indian situation once, Rabindranath Tagore’s Basant Utsav being just a revival of that age old tradition.

Kaama temples, their festivals and processions

What is the utsav (celebration) in the famous Bollywood movie Utsav by Girish Karnad? It is not so widely known that the utsav in that movie is in fact Kaamotsav only.  The movie is based on a first century BC or first century AD Sanskrit play Mrichchhakatikam (the Little Clay Cart) and an older Sanskrit play Daridrachaarudattam  by Bhaasa. The temple of Kaama, the garden attached to it, the fare and procession of the Kaama festival are the important aspects of the setting of the play Mrichchhakatikam (the Little Clay Cart). This shows that: One, there were temples for Kaama during first century BC or first century AD; Two, Kaamotsava was part of the festivals of these temples; Three, There were processions as part of these celebrations. There is a great possibility that the setting in the play is north Indian.

Archeological excavations have been showing that temples dedicated to Kaama were prevalent in different parts of the country. Madan Kamdev temple from the north east (9th-10th century AD) is an example. There seem to be many Kaama temple sites in ruins or transformed into other temples in many other parts of India. Kaama and Rati being depicted on the walls of temples of other deities is also abundant.

Whether it is being viewed as reenactment of the Holikaa narrative, or Kaamapunarujjeevana (rebirth of Kaama) narrative or the Krishna Raas Leelaa narrative, the Anthropological and Psychoanalytical view that ‘by participating in the ritual, you are participating in the myth as such, you are being, as it were, put in accord with that wisdom, which is the wisdom that is inherent within you anyhow’ applies to all the cases. But the above analysis proves that Kaamotsava was a pan-Indian festival deeply enshrined in the Indic roots such as Vedas, Puranas and classical Sanskrit and other literatures. In the surviving form of the festival that still continues to be pan-Indian, we seem to have lost certain aspects such as the Poojaa of Kaama, Kaama temples, there fares and processions etc. But if at least we realize that the ideas like north Indian festival spread to south India etc., are modern misunderstandings, that’s a sufficient unlearning. Particularly important is the awareness of the fact that our Holi/Kaamotsava/Vasantotsava is a true festival of love, a participation in nature’s seasonal changes and a celebration of one of our purushaarthas, i.e., purposes of life, not considered as a sin as long as it is ethically fulfilled.

Our Palace of Purusharth: Journey to a Dharmic Framework for Parents and Children