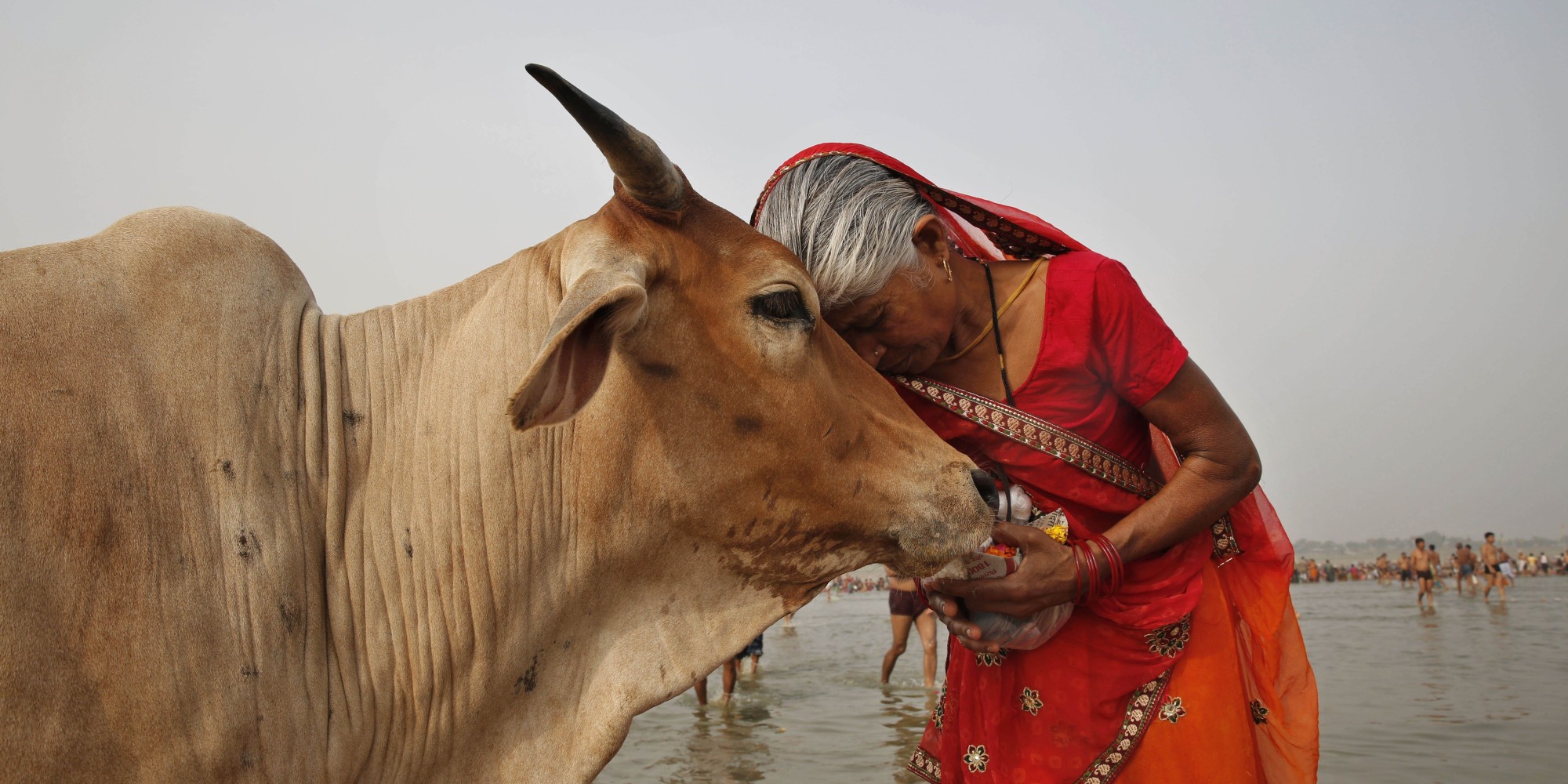 The American Society of Microbiology on March 31 published a research paper titled “Are Unique Regional Factors the Missing Link in India’s COVID-19-Associated Mucormycosis Crisis?” The authors of the paper are Jessy Skaria, Teny M. John, Shibu Varkey and Dimitrios P Kntoyiannis. It was labelled and catalogued as an “Opinion/Hypothesis” piece.

The authors speculate the following:

“Specifically, we hypothesize that Mucorales-rich cow excrement, given its use in multiple Indian rituals and practices, especially during the pandemic, probably played a key role in India’s CAM (COVID-19 associated mucormycosis) epidemic.”

In other words, the use of cow dung in its various forms played a key role in India’s CAM epidemic.

In the following paragraphs, we will first look at how the mainstream media and online portals have spun this “hypothesis.” Next, we will go through the original paper and evaluate the data used and the problematic nature of the analysis.

But first, the spin.

Here is the coverage this scientific paper received. We have listed the publication and the title of the article.

Do expect that this news will be aired on a local TV station near you, and published in The New York Times, The Washington Post, BBC, Al Jazeera…. And very soon social media will be abuzz with the ill effects of cow dung, accompanied by a thousand mocking memes!

To be fair to the authors of the original paper, they have hypothesized the relationship between cow dung and the disease, but journalism – either the lazy variety or the tendentious variety – starts playing out the spin. Who cares for science as long as the storyline can press the right buttons… especially Hindu buttons, and about the Hindu “worship” of cows, Hindus drinking cow urine… the works!

Let us look at the research paper itself. What data was used and what was the analysis done to arrive at the possibility of a link between the onset of black fungus disease and cow dung?

The first set of data that the authors use are listed below along with links to the respective data source.

Why would anyone conflate anti cow-slaughter legislation with the occurrence of Mucormycosis while they want to link it to the use of or the prevalence of cow dung in Indian farms and villages? Is it their contention that if cows were allowed to be slaughtered, then the quantity of cow dung would be reduced? And hence, the infection of black fungus?!

Assuming that there is indeed a relationship between cow slaughter and Mucormycosis, what does the data say?

A map of India shows that Karnataka has banned the slaughter of all cattle (purple color). Whereas, the Karnataka legislation (click here to read about the law), allows the slaughter of buffaloes over 13 years (Sec 18 (d) – exemptions). Therefore, Karnataka should have been coloured green (“above an age threshold with a certificate”) and not purple.

We don’t intend to go over every single detail of the paper but would like to show that there is an extreme lack of rigour if not egregiousness in this “opinion/hypothesis” piece and it does not meet the standards required for publication in an academic journal.

Tamil Nadu has qualitatively a substantially different law as compared to the other four states.

While the other four states have quite stringent laws, Tamil Nadu is quite lenient. Cows can be slaughtered if they are over 10 years old.

Karnataka, on the other hand, defines “cattle” as cow, calf of a cow and bull, bullocks of all ages, and he or she buffaloes below the age of thirteen years. Also, only buffaloes above the age of 13 years can be slaughtered as per the exemption. Cows cannot be slaughtered whatever be the age.

Despite Tamil Nadu having comparatively lenient laws, the case load of Black Fungus is the third highest in the country! Why would that be? What are these academics looking at then?

The statement that “CAM were substantially more common in states that ban cow slaughter” therefore does not pass the data test. Yet, the authors make this statement authoritatively and the editors have accepted it and published it!

The authors quote Kerala with 128 cases but ignore Tamil Nadu! What they also are unable to prove is causation. There may be some correlation, even if their data is fudged, but even sophomores are warned about confusing correlation with causation. Well, if it comes to cows and Hindus, why should scientific standards apply at all? Innuendo, speculation, and mischief will do, and it will ensure wide media coverage to boot.

Then the authors say that, “These practices possibly resulted in unusually large fungal loads that markedly increased the risk of invasive fungal infections among COVID-19-susceptible Indians. Cow dung, which harbors multiple fungal species, could also explain the instances of mixed fungal infections, such as concomitant mucormycosis and aspergillosis, which were reported in as many as one-third of CAM patients in India (13, 30, 31).”

“One third of all CAM patients had mixed fungal infections which is harboured by cow dung” — This is the premise of the hypothesis of the paper.

The link to citation 13 is here — “Fungal population and diversity in partially digested cellulose from the abomasum of beef cows.” This was a study done of a slaughter house in Nigeria.

The link to citation 30 is here – “Mixed invasive molds among COVID-19 patients” – which is a study of 10 patients in India.

The link to citation 31 is here – “Covid-linked fungal infection poses challenge” – which is an article in The Tribune written by Jagdish Chander, former Head of Department, Microbiology, GMCH, Chandigarh.

Citation 13 has a tenuous relationship with the theme of the article. It quotes another paper claiming that these “… fungi usually gain entrance into the digestive tract of ruminants through food and water. It is therefore not unusual to find species of these genera in the partially digested cellulose collected from the abomasum (one of the four stomachs of cows) and in cow dung.”

But nowhere is this related to the claim that one-third of the cases had mixed fungal infection.
The second citation is #30. The editors of the publication of #30 give this clear warning at the start: “This article is a preprint and has not been peer-reviewed. It reports new medical research that has yet to be evaluated and so should not be used to guide clinical practice”.

Therefore a paper that has not been peer-reviewed becomes the basis of another hypothesis.

Even if ignore that, what was this paper about?

This paper was based on the condition of 10 patients and did not arrive at any conclusions but offered only very tentative indications. In fact, one paragraph of the paper is reproduced below.

“Environmental factors play a significant role in increasing CAM and CAPA in the Indian subcontinent. The atmosphere is more conducive for the fungus to thrive in South Asian developing countries [26]. There are a few unanswered and unresolved theories like incessant use of industrial-grade oxygen and use of herbal products may have caused this increase in fungal diseases. There could also be a possible role of contaminated water used in humidifiers, unsterile humidifier bottles, and non-medical grade industrial oxygen cylinders in an increase of fungal infections through the spread of fungal spores [27]. Though fungal spores do not survive in water yet chances of transmission of spores may be there from high contact hospital surfaces including reusable humidifier bottles. Considering the above-mentioned viewpoints, the present study patients also had such exposures, but a direct relationship couldn’t be established.”

The article in its conclusion says: “Mixed fungal infections i.e. CAMA during COVID and post-COVID periods may be an emerging disease.”

One-third of CAM patients in India had mixed fungal infections? There is no mention of that in this citation as well.

We still have one more citation — #31. Click here to see the paper. The author says “By July 15, there were 45,432 cases and 4,252 deaths in India. Pakistan, Sri Lanka, Bangladesh and Nepal also reported CAM cases, but not to this extent.”

Where then is the “one third of CAM patients in India had mixed fungal infections?” How did the authors of the paper arrive at this number? If they are not available in the citations, how did the editors allow it to be published? Was there any peer review?

There are a number of other vague statements and assertions in the paper. One of them is this:

“That the CAM epidemic occurred shortly after major Hindu religious festivals is also unlikely to be a coincidence; however, the crowding at such festivals could have contributed to increased cases of COVID-19 and consequently increased numbers of vulnerable hosts. In 2021, the Festival of Holi was celebrated in March, and the Kumbh Mela was held in April, preceding the second COVID-19 wave (42, 43)”

There is enough data about the Kumbh Mela and its impact and the authors could have quoted authoritative data. But to quote a 2015 paper and a hearsay, speculative BBC report in an academic publication is questionable, to say the least.

The conclusion therefore about the paper is that it was either a poor job or a paper with an “agenda” to question Hindu practices – Holi, Kumbh Mela and more importantly, the reverence Hindus have for the cow.

Cow protection is part of the “Directive Principles of State Policy.” Article 48 of the Constitution states: “The State shall endeavour to organise agriculture and animal husbandry on modern and scientific lines and shall, in particular, take steps for preserving and improving the breeds, and prohibiting the slaughter, of cows and calves and other milch and draught cattle.”

So, how were these authors able to cobble together this speculative work and get it published? Should we not call upon the journal to withdraw this paper or at least get it reviewed?

As far as media coverage is concerned, we should remember the basic premise of contract law – caveat emptor – let the buyer beware! We should learn how to consume news, especially those that have anything to do with Hindus, Hindu practices, Hinduism, and Hindu ways of life.

Madhava Madanapalli is an Ins-tech professional with over three decades of work experience – both in India and abroad. Fortunate to be a college drop-out, with no fancy degrees, he is a student of Yoga and Samskrita. He believes that Samskrita is the core to retaining Bhaarateeyata.