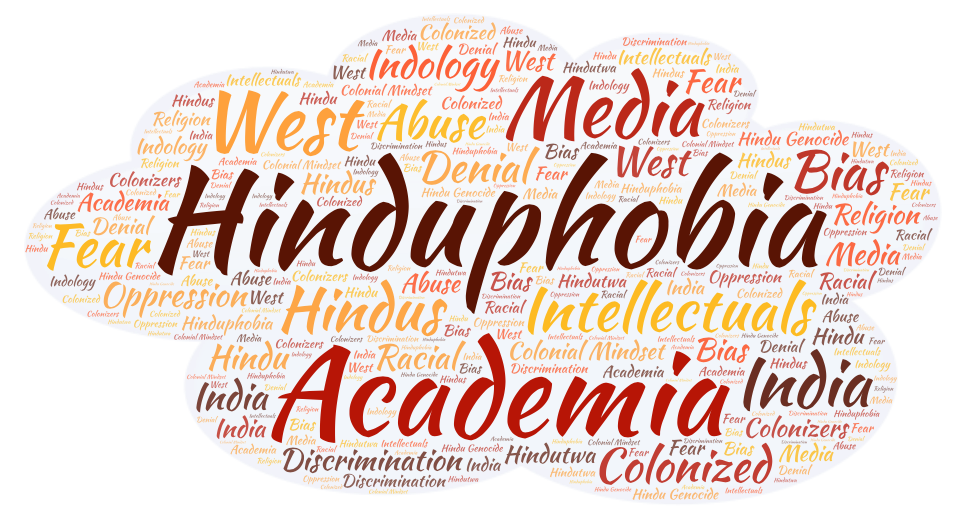 That Hindus have posed a problem for supremacist faiths and extremist ideologies is not acknowledged overtly by the faith followers and the ideologues, but their actions on the ground, their words and messages crafted for use by the media and by academics, clearly do so. Just make note of the amount of money pumped into India by the supremacist faiths each year for their conversion purposes, or the number of journal articles, opinion pieces, and skewed reports that have inundated media and academic spaces to understand the game plan of these groups.

Some say that Hindus have withstood onslaughts from these groups for millennia, and that they will never be able to beat us down, get rid of us, or rob the world of Hindu richness. However, we now face an existential threat because of the manner in which these groups have coalesced in their campaign to rid the world of us, pesky Hindus, or bottle, cap and sell our beliefs, philosophies, and faiths as poison potion. The assaults on us and on our faith-systems have gone on for so long that we should have become inured to these attacks. However, the intensity and the volume of these attacks, and the nonstop plotting to bring Hindu majority governments down or to sow discord and create conflict in Indian society is so dire that we better take notice.

We at India Facts have the task of monitoring, reporting, and evaluating these threats and attacks. It is, at times, overwhelming to even list the number of attacks on us on a single day. If, for example, you sign into Google Alerts and type in key words like Hindus, Hinduism, Caste, BJP, RSS, or Hindutva you will receive each day, in your mailboxes, several media reports that include these words or key terms. What Google Alerts do not always access and send you are the number of academic essays and articles that are about these matters. What you will find in the Google Alerts lists is a barrage of media reports and opinion pieces against Hindus, from across and around the world, and much of it generated by Indians themselves, in India, or residing abroad.

If we are not to succumb to despair or get overwhelmed by the volume and strength of these attacks, we need tools to organize this information. Using these tools, we can train ourselves to recognize the nature of the attacks, where they are originated, and what is their intent. Organizing the information will help us in correctly identifying the nature and thrust of these attacks, and it will then enable us to use our resources to counter them effectively.

Not all of us can write about every aspect of Hinduphobia. We need area experts to track, analyze, and report on each of the anti-Hindu battlefronts. In this context, the diagram that follows presents us a clear picture of the agencies, the actors, and the agendas that threaten Hindus and Hinduism, and offers us a tool to focus on a specific problem, find the source, observe their methods, and analyze and report their actions and their game plans. 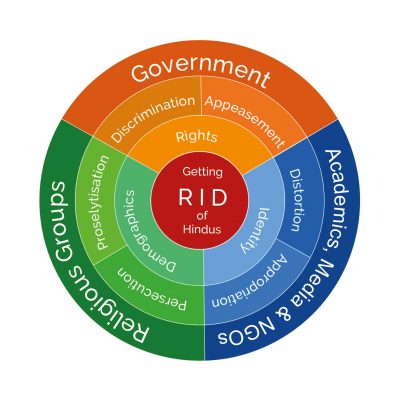 Let us unpack this diagram. What does the acronym RID stand for?

What do Hinduphobes or unwitting or unwilling government agencies do about these? Take the matter of Hindu rights. Past governments, that claimed to be secular and to represent all Indians, were consciously involved in denying Hindus the rights that were offered to other faith-followers in India. How did they discriminate against Hindus? Many have pointed out to Articles 25-30 and how they are used to shortchange and/or deny Hindus, and you can read some of it here, here, and here. Governments have deliberately discriminated against Hindus, or they deny or have denied Hindus to appease “minority” voters.

The next letter in the RID acronym is about “identity,” and how Hindu identity is distorted or appropriated by malefic actors among the NGOs, the media, and in academia. NGOs, both homegrown, and foreign, have made it their business to orchestrate riots, to carry on misinformation campaigns, and to subvert Indian laws to carry out their destabilization activities. That the media, both Indian and foreign, have been carrying on sustained campaigns of destabilization through provocative and mendacious reporting, biased and prejudiced opinion peddling, should not come as a surprise except to those who have bought into their lies. We can read about some of their reporting and opinion pieces here, here, and here. The media includes not just the news media but also the entertainment media. We can read about some of the egregious depictions of Hindus and Hinduism in films and on TV here, here, and here.

Joining hands with the media, or using the media as their handmaiden, academics have sought to anthropologize Hindus and Hinduism, distorted our history, peddled Aryan invasions and migrations, glorified murderous Mughal and Muslim rulers and glossed away the violence and destruction wrought by them, denied the nature and substance of the archeological findings in Ayodhya, laid the blame at Brahmins feet for all social ills in India, made Rama a misogynist, and sought to steal Yoga and Ayurveda from Hindus, either gifting them away to Buddhists or denying their antiquity, their indigeneity, and their spiritual worth. They have used their reductionist approaches to break down, swallow, and digest Hindu knowledge and practices, excreting distorted, smelly gobs of anti-Hindu bigotry dolled up in academic regalia. You can see and read and listen to some of that here, here, and here.

The last letter in the RID acronym stands for “Demographics” – and how through proselytism and persecution of Hindus monopolist and supremacist religious groups like Christians and Muslims, and extremist ideological groups like Communists have orchestrated campaigns to contain or reduce the Hindu population and therefore minimize their influence in the public sphere. That Christians have been the original sinners as well as serial conspirators in proselytizing others, not just in India but around the world is a story that gets told here and there but despite which they have been able to sell the idea successfully over millennia that Jesus is the “only savior” and proselytism and religious conversion leads to “more open societies”! Conversions have wrought havoc on individual families and the communities they live in, and the low-intensity, daily battles that these harvesters of souls engage in chip away at the foundations of communities leaving them shaky, distressed, and deracinated.

Muslims came later, even more aggressively at the “kafir”, and they have fought alongside with Christians and against Christians in their bid to make the world Muslim. Together, they have devastated world cultures, robbed people of their lives and their land, their languages, and their liberal view of the world, and laid waste the idea of diversity. Arun Shourie wrote two influential books – “Missionaries in India,” and “Harvesting our Souls” – and coined the memorable term “Marxist-Mullah-Missionary” nexus – to capture some of the devastating effects of proselytism and extremism. Sita Ram Goel and Ram Swarup were some of the early writers warning about the nature of these monopolist and supremacist forces, but their work and their lives have been effectively marginalized by India’s “secular” academics – none of whom have written one major work on the devastating effects of monopolist religions but who have all the time in the world to deride Hindus and Hinduism. That Hindus have been persecuted not only in neighboring Pakistan, Bangladesh, and Afghanistan – all Muslim majority countries – but also in India itself where Muslim majority areas and districts in Kerala, in West Bengal, in Assam, and in big cities around the country have become “no-go” zones – goes to show how demographic battles and wars have been planned to destabilize India, and to rob India of its Hindu heritage and its Hindu peoples.

The “RID” diagram may not capture all of the forces aligned against Hindus and Hinduism: for example, we now have powerful, rich, individual donors like George Soros who have been funding and supporting anti-Hindu work and who have been railing against the BJP Government. There are the Sikh and Dalit groups, among others, who have joined hands with the old and experienced destabilizers of India. But the diagram offers us a clear visual for understanding Hinduphobia and its sponsors. As we, in India Facts, offer fellowships to aspiring and experienced authors to write about these matters, we hope that the diagrammatic representation we offer here will help them select their own area of research, and that they will begin to probe more carefully and articulate more effectively the threats that Hindus and Hinduism face.