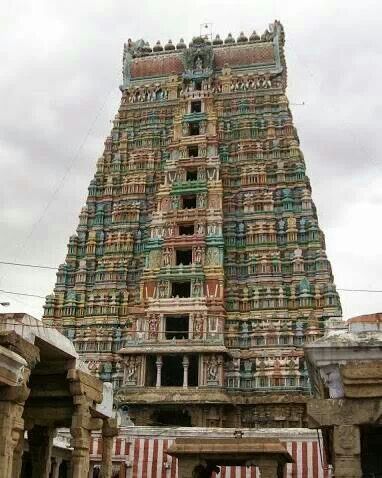 Srivilliputtur in the Virudhunagar district in the southern state of Tamil Nadu is famous for the Vatapatrasayee Temple, which is one among the 108 Vaishnava Divya Desams and the Andal temple, the place where Andal (one among the 12 azhwars) espoused Rangamannar (Ranganathaswamy of Srirangam). The town “Villiputtur” derives its name from the King Villi, who established the town and built the temple of Vatapatrasayee as per the directions of the Lord, whom he saw resting on Adisesha under a banyan tree (vata vriksha). Later, after the marriage of Andal with Rangamannar at this town, it is known as “Srivilliputtur”.

The eleven tiered and 192 feet high gopuram of Vatapatrasayee temple, believed to be built by Periyazhwar (father of Andal) is also the emblem of the Tamil Nadu state. Like many other temples in Tamil Nadu, these two temples are also under the control of Hindu Religious and Charitable Endowments Department (HR&CE). Although the temple whose gopuram is the emblem of state government is expected to be maintained with utmost care, the HR&CE has largely been ineffective in doing so. In fact, the HR&CE, which has taken over the administration of many temples citing mismanagement, has only worsened the condition of the temples and increased corruption. This has resulted in many serious objections and complaints against the department by the devotee communities.

The temples of Srivilliputtur rose into prominence when the government directed the HR&CE to renovate it under the temple renovation scheme introduced during the tenure of Selvi J Jayalalithaa. Although the renovation of the temple was the talk across the state during the grand Kumbabhishekam, many have raised doubts about the way the repair took place. Questions came up also about the measures adopted by the HR&CE to manage the day to day functioning of the temple.

Ancient temples in South India are also the places where the architectural and sculptural skills of our ancestors are displayed in full glory. The inscriptions present in such temples also stand as the testimony for many historical incidents in our country. Instead of taking the advice of experts in preserving such sculptures and inscriptions, the HR&CE had showcased its ignorance and callous attitude by single-handedly deciding to clean the walls and pillars of the temple by using the “sandblasting technique”. Though this procedure is mainly helpful in cleaning the oil spots and other dirt in the walls of the temple, it also damages the sculptures and erodes the inscriptions. But the irresponsible use of Sandblasting by the HR&CE during the renovation of Srivilli temples damaged the sculptures (even breaking them in some locations) and tainted the historical inscriptions in those temples. This denotes the enormous indifference of HR&CE about anything of a cultural and historical significance for Indic civilization.

The well planned ancient drainage system of the temple, which diverted the rain water falling on the floor and roofs to various tanks across the town, has also been messed with during the renovation. The pipelines constructed in the ancient times have been damaged causing water stagnation across the temple and even mixing with sewage water both inside and outside the temple.

The Andal temple was renovated and extended by the Vijayanagara emperor Krishnadeva Raya when he visited the place to submit his work “Amuktamalyada”, at the feet of Andal. After writing the poem, he had an issue as the heir apparent to his throne. The emperor who was a staunch devotee of Andal, donated about 1,00,000 grams of gold ornaments studded with precious gems. He also constructed a huge Kalyana Mandapa in front of the temple, wherein he mentions in an inscription (recorded in the epigraph collections of the temple present in the town library) that the whole town of Srivillputtur can sit and have the darshan of the Kalyana Utsavam of Andal. But after the takeover of the administration of the temple by HR&CE, the mandapam is currently functioning as a bazaar. This has not only reduced the space allotted for the devotees to witness the Kalyana Utsavam but is also destroying the architectural marvel of this mandapam. The eloquent pillars of this mandapam are eroding because of the careless handling by the shops of the bazaar. But the HR&CE seems to be more intrigued with the revenue the stores generate rather than preserving the architectural excellence of such antediluvian structures.

Apart from the temple, the town of Srivilliputtur is also popular for the delicious dessert called “Paalkova”. While this dessert has no place in the list of sweets prepared for the Lord during festivals or daily rituals, the prasadam stall of the temple operated by the HR&CE sells it to the devotees. Though selling Paalkova in the temple is not a mistake, one can’t simply stop wondering whether it is an act of HR&CE to bamboozle the devotees by selling it as Prasad offered to the Lord. Can the organization of secular government delude the devotees visiting the temple for the sake of increasing its revenue? Is it not an unconstitutional act of fraud?

While selling non-prasadam sweets might upset the local devotees who know the rituals and other processes of the temples, it is unfortunate that this is not the only unethical procedure followed in the temple by the HR&CE. Though the HR&CE sells tickets at different temples under its control for quick darshan, it has gone one step further here and openly promotes economic discrimination. Usually in most temples under HR&CE, the queues of people with quick darshan tickets mixes with general queue near the sanctum sanctorum of temples. But in Srivilliputtur Andal temple, the lines remain separate even at the spot of darshan. The fact that poor people who are unable to afford the high priced tickets are made to have darshan from a distance while those with these tickets are allowed to go near the deity is an open promotion of economic discrimination. Is this a way of secular government to correct the mismanagement present in temples prompting it to take over the administration?

One excuse often given by the authorities for this discriminatory queue system is the lack of income for the temple. But the temples of Srivilliputtur collectively own about 4000-5000 acres of land, most of which are fertile agricultural fields. While these land have been the source of income for the temples ever since they were established, the secular government, which has taken over the administration has lent these lands on lease to people with political connections. The individuals who have acquired these properties have not been paying the rent amounts. Despite repeated requests by the locals, the HR&CE has not taken any steps to regain control over these temple lands or collect the yearly lease amounts as agreed by the occupants.

The political interference in the administration of the temples has completely damaged them economically. Moreover, the HR&CE is indulging in unethical and unconstitutional activities of trickery and discrimination by interfering in the religious affairs of the temple. The fact that HR&CE had even curtailed the annadanam, which used to take place in the temple till few decades ago shows the level of callousness shown by them towards the temple traditions. Recently, it was restarted again in a small scale after the insistence of some devotees, who took up the responsibility of providing the funds.

That the government machinery can get away with all such ignominy foisted upon the temple shows that Hindus and their Dharma are taken for granted by the secular government. Apart from the temple lands, the exploitation of the temple premises reveals the nary a care attitude of the HR&CE for customs, traditions and spiritual needs of the Hindus. The so-called division between ‘secular’ and ‘religious’ activities of a Hindu temple is a sham. Anything and everything pertaining to temple is divine for a Hindu. There is nothing ‘secular’ (devoid of divine) with regards to a temple for a devoted Hindu. It’s high time that we changed the laws that give authority to the secular government to take over the administration of the temples by citing an abstract mismanagement. We need legislation that facilitates Hindu temples to freely function as centers of Dharma and Adhyatma for which they have been conceived by our ancestors.