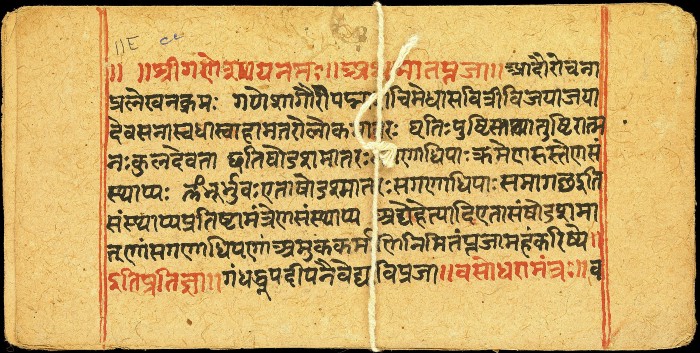 Most students of history have probably not heard of the question of the dating of the Yavanajātaka even though it is a significant milestone in the history of Indian science, and it has lessons both for the scholar and the layperson. The Yavanajātaka has long been believed to be the earliest Sanskrit treatise on Greek astrology in the framework of Indian models, and its date has implications for the understanding of the history of Indian astronomy.

According to scholarly analysis it is as late as early seventh century CE because it is around that time it is first mentioned in another text. If one could date it to, say, the second century CE, then one could claim that it had within it the foundations of Indian astronomy that were borrowed from the Greeks.

David Pingree, who was an influential academic in the history of science community, edited the text of the Yavanajātaka based on a single Nepalese manuscript which he described as extremely faulty. He changed the text quite liberally, in line with some preconceived notions about Indian science.

Based on his emendations, Pingree claimed that the Yavanajātaka was an astrological/astronomical work composed in 269/270 CE. by Sphujidhvaja, an “Indianized Greek” who lived in the Western Kṣatrapas, adding that the work was a versification of a prose original in Greek composed by Yavaneśvara in Alexandria in 149/150 CE. The dates were not in the manuscript; he had made them up. Furthermore, he had used to the two names of a single individual of the tradition, to create two personas.

Pingree published the new date in his book The Yavanajātaka of Sphujidhvaja (1978) [1]. This was sensational and the history of astronomy community around the world took note. Pingree’s claims were based on his readings of the last section of the Yavanajātaka, where mathematical astronomy is described.

The Sanskritist and historian of science, Kripa Shankar Shukla, showed in 1989 that Pingree’s translation “was marred by faulting editing, the incorrect readings being adopted and the correct ones given in the apparatus criticus.” [2] In other words, the manuscript was not flawed and Pingree had discarded the correct material and substituted incorrect text in place. Pingree had failed to understand the basic, underlying mathematical bases of the text, and his conclusions were simply wrong.

The historian of astronomy Bill Mak adds in a recent paper: “The so-called Hipparchusʼ value for the length of the solar year as well as the “earliest zero” are all Pingreeʼs own emendations not attested in any extant manuscripts. This is certainly not good news, as it sounds like as if one of the most respected scholars in Indian history of science fabricated his findings.” [italics added] [3].

Here’s the background to the story. After the end of the Second World War, Otto Neugebauer, the Austrian-American historian of science, in his study of Babylonian clay tablets showed that the Babylonians knew much more mathematics and astronomy than previously believed. This was widely welcomed for this meant the origins of science were not be seen as a uniquely Greek phenomenon as was commonly supposed by many European scholars. Neugebauer encouraged his doctoral student, David Pingree, to take these ideas further.

Sadly, Western historiography of the Indian sciences and the arts has been mired in colonialist and racist assumptions. They are so well entrenched that often the careless scholar is not aware of the bias and error. The bias is driven by the idea that Indian culture is deficient and incapable of science, and since India and Europe share the so-called Indo-European languages, anything of scientific value in India must have come from Europe or intermediaries. As a part of this idea, it is also assumed that India had no tradition of observational astronomy. David Pingree decided to find proof of this theory. His Ph. D. thesis was titled ‘Materials for the Study of the Transmission of Greek Astrology to India’ (1960).

We must note that this thesis runs counter to the understanding of Indian astronomy in the medieval world. For example, Sa’id al-Andalusi, who wrote Ṭabaqāt al-ʼUmam (Categories of Nations) in Muslim Spain in 1068, which is a fascinating text that assesses the sciences of different nations, says that the sciences, particularly mathematics and astronomy, are most advanced in India (calling it the first nation in science).

Pingree got started on his research when he was struck by the similarity between some Greek and Sanskrit terms. He says: “[In the Vatican Library,] in the margins of one such manuscript, Vaticanus graecus 1056, I noticed references to Indian astrological ideas. In the library I found a printed edition of Varahamihira’s Brhajjataka, and found therein Nagari transliterations of Greek technical terms. Since the material in Vaticanus Graecus 1056 was clearly translated from Arabic, it was clear that Greek astrology had travelled to India, from there to Islam, and thence to Byzantium.”

The origins of many of these Greek terms are contested. For example the word hora of Sanskrit is seen as a contraction of ahorātra (day-and-night) by some Sanskritists and not as a borrowing of Greek ὥρα. Furthermore, the reasons why a certain word is borrowed may have nothing to do with the absence of that name in the borrowing culture. For example, the Delhi Metro authority is using English colors names in Hindi. There is evidence of western movement of Indic tribes and we find the Mitanni Empire of West Asia in the second millennium BCE where the kings had Indo-Aryan names, and some commonality between Sanskrit and Greek terms could be traced to this earlier interaction. I mention this just to make the point that commonality of two or three terms could not, in itself, be sufficient proof for borrowing in one direction or another.

Pingree now devoted many years of his career to establish that there was literally no originality in Indian mathematical astronomy and it was derived either from Greek and Babylonian sources. What if there were no remotely similar materials in Babylonia or Greece? No problem, he said. If there was nothing in Greece and Babylonian science, then what was in India was from these lands and these sciences came to India after the Achaemenid period, before the Mauryas. Even the Vedāṅga Jyotiṣa of the Vedas that has an internal date of 1400 BCE was to be seen as being derived from the Babylonians.

In a paper titled ‘The Mesopotamian origin of early Indian mathematical astronomy’, Journal of the History of Astronomy (JHA), 1973, he says: “the origins of mathematical astronomy in India as just one element in a general transmission of Mesopotamian-Iranian cultural forms to northern India during the two centuries that antedated Alexander’s conquest of the Achaemenid empire.” [italics added] He was arguing for not only astronomy but other cultural forms — such as architecture, dance, music, and writing — to have come from the West.

In another paper, ‘The recovery of early Greek astronomy from India’, JHA, 1976, he proposed that if some science is not to be found in Greece, but it is in Indian texts, that it must be taken as lost Greek science.

This was an audacious idea from the perspective of the logical method, and he must have felt it was irrefutable. In theory, one could now show that science of any Nation A was borrowed from Nation B, because one did not need any linking evidence.

Pingree should have been more careful because his thesis that even mathematical tables in the siddhāntas were brought into India from Greece was shown to be wrong by the French historian of astronomy Roger Billard years earlier in 1971. In his book, L’Astronomie indienne [4], Billard studied the mean longitudes provided by the Indian astronomical siddhāntas. These are sidereal longitudes, deviating therefore from the corresponding modern values by the rate of precession.

Considering these deviations, he found that they agree at only one time, which must be the time when the parameters were obtained based on actual observations, and this must be the date of composition. Using this logic, Billard showed that Āryabhaṭa’s siddhānta had the perfectly reasonable internal date of 510 CE, and so were the dates of the other siddhāntas, and the observations had been made at the stated locations. Clearly, Indians were creating siddhāntas in response to observational data that they were obtaining on their own.

A much better manuscript has been found now that invalidates Pingree’s reconstructions [5], and this makes the mistakes in the translation pointed out earlier by Shukla look even more devastating. This should not have been a big deal in itself because all scholars make errors, however once they find their mistake, especially related to something huge like the date of the Yavanajātaka, they own up and make a correction.

I believe Mak calls the Pingree reconstruction a fabrication, which means the same as hoax, rather than a case of an incorrect reading, because Pingree did not publish a corrigendum.

One can only suppose that he believed so strongly in the broader theory, which might be called the Science and Culture Migration Theory, he was certain that his errors were not a big thing to dwell on as they were only a small element in a bigger picture.

Sadly, the larger picture is riddled with other fabrications[6].

[5] Mak, B. 2013. The Date and Nature of Sphujidhvaja’s Yavanajātaka reconsidered in the light of some newly discovered materials, History of Science in South Asia 1: 1–20. (PDF)

The Hijacking of Indian Astronomy- III

The Hijacking of Indian Astronomy- II

The Hijacking of Indian Astronomy- I