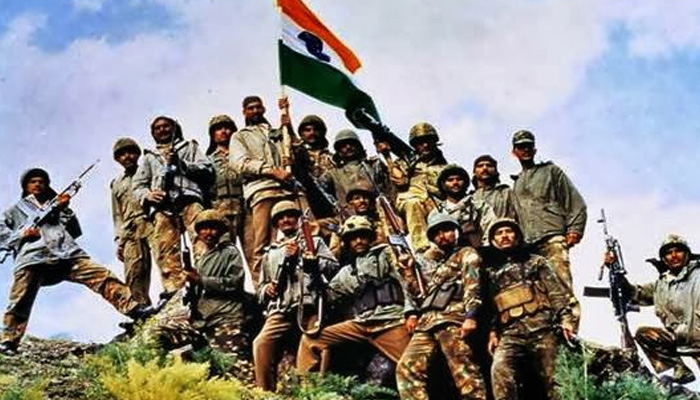 I met an Indian colleague at work for the first time. We have interacted remotely many times but he lives in Manhattan while I live across the continent. So, this was the first in-person meeting. He mentioned that his son just got a job in a Wall Street investment bank as a quant after completing his masters. I was surprised that he has a 24 year old son and told him, “Hey you look much younger.”

He hesitated for a moment and replied: “I adopted him. He is my sister’s son. We had a tragedy in the family. His father was an Indian Army officer, who was killed in action in Kargil. We don’t know if he was really killed because the body or remains were never found. He may even be held captive in a Pakistani prison. My sister believes that her husband is still alive. She observes karva chauth and every other vrata for his well being. She is looking forward to the day her husband would return and she would reunite. I adopted her son so that he could get a good education in the USA and settle down.”

I had to fight back tears. I didn’t have a word to say.

This is day to day reality for Indian soldiers. Their lives could be extinguished by a terrorist any time. Their families live in a perennial state of uncertainty. The greatest hope their wives sometime have is, “May be the man I love is held captive in a Pakistani prison. One day he would return to my embrace.”

We are safe because of the sacrifice made by India’s wonderful soldiers. We take our wives and children to the movies because somewhere a soldier is ready to take the brunt of a bomb attack that would’ve otherwise killed our family members. Somewhere a soldier’s wife is observing vrata hoping that her husband missing in action would return while we order lavish food for our family at an expensive restaurant.

Have we expressed gratitude to our soldiers for the ultimate sacrifice they make so that we could live safely? Have we ever thanked their wives, mothers, and children? The answer is no.

I thought of writing a post lambasting the anti-nationals and leftists who denigrate the Indian Army by leveling false allegations. Then I paused. I thought that there is a hardcore of leftists, which is anti-national. Its members are funded by the CIA and hostile foreign powers. They would do anything for money and unscrupulously attack the soldiers. They are scheming liars and scum. However, there are also a few ideological leftists who are patriots. They are men of scruples. I thought I would rather appeal to them with this post.

Here is my appeal.

No other country allows its media to denigrate its soldiers. In no other country would human rights groups be allowed to take the sides of terrorists and their stone-pelting supporters. Why should India alone allow that under the guise of free speech? Do you think that propaganda demonizing our soldiers has been a reason that the Indian public is apathetic to the plight of an officer who may still be languishing in a Pakistani prison? Do you think you owe it to his wife or widow? Could you please make an attempt to make amends by never again supporting any unfair public criticism of Indian Army under the guise of human rights or free speech?

I hope you will do that. If you had listened to my colleague narrate his sister’s story you would’ve been moved as well. You would’ve thought that it is more important to be empathetic and grateful to our soldiers than to take positions which make us desirable in the eyes of westerners. My words are not powerful enough to capture the reality our soldiers and their families experience. However, I hope that as an intelligent being, you would transcend the limitations of my writing and consider the appeal.