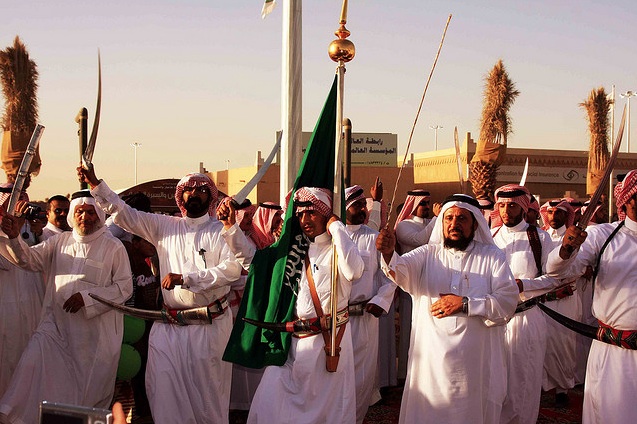 The Islamic leaders have wonderfully replaced ‘state’ with ‘faith’ and we have, “Everything in the faith, nothing outside the faith, nothing against the faith”. And Muslims have been indoctrinated to believe that this tyrannical fascism will march them to Heaven.

After setting the iron-cocoon of one and a half billion Muslims ablaze, Saudi Arabia, the creator of this ‘inferno’ continues to fuel the fire at a rapid pace. A look at what Saudi Arabia exports to Muslims around the globe should send shivers down one’s spine but the civilized world is unwilling to take the bull by its horns which gave way to today’s catastrophe. Wahabism and Salafism among other things ferociously advocate religious and sectarian apartheid, place Sharia above Constitution, justify terrorism and Stone-Age misogyny, promote violence and slavery of non-believers and openly vouch to expand Islam while brutally crushing other faiths on their lands. But astonishingly, the non-Muslim world where Muslims today make chunk of the population does not feel the necessity to hold Saudi Arabia accountable for intoxicating their population with such perilous thoughts.

Spreading its tentacles all over the world, Saudi Arabia has successfully pitched Muslims against Christians, Hindus, Jews, Zoroastrians, Buddhists, Jains, Sikhs, Bahais ensuring that every other faith is considered an enemy by the Muslims.  So the next logical question pops up: Are Muslims comfortable among themselves? But in reality the internal sectarian animosity is endemic: Sunnis massacre Shia and vice versa while both of them unite to butcher Ahmedis! What is astonishing is how the Muslims have completely lost the faculty of introspection to analyze the cause and effects of the mess they have created for themselves by injecting hatred from infancy.

Stoning to death, a monstrosity which is exclusive to Islamic nations, doesn’t seem to meet with any protest from the global Muslim population. The  thirteen year old Ayesha Ibrahim Duhulow, who dared to report her gang-rape was stoned to death in Somalia. It’s now official that every year about thousand young women belonging to minority communities (Hindu, Christian and Sikh), are abducted, forcefully converted and married off to the kidnapper goons in Pakistan. How many Muslim organizations have even condemned such brutalities?

The horrendous practice of marrying off girls as young as six , bachabaazi (using young boys for entertainment purposes including sexual exploitation), opium brides ( handing over young girls to moneylender in case of non-repayment of loan), muta marriage(the ‘hobby’ of rich Arabs to hunt for impoverished  pre-teen and teenage girls in South Asian nations, throw money to parents, perform a ‘nikah’ ceremony, rape for  three to six months, ditch with ‘triple talaq’ to move on to the next prey), the completely forgotten kidnapped school girls of Boko Haram and the Yezidi young women and girls held by ISIS are other barbarities  against which any Muslim organization has yet to a token protest if not a massive rally.

Muslim-majority nations are a curse to live in even as Muslims, so what would be the condition of non-Muslims? Persecuted and hounded, declared as secondary citizens, women and children kidnapped at will as sex slaves, worship places vandalized, Islamic food habits and culture forced upon them– the torture unleashed is unimaginable! Thanks to Saudi Arabia’s guidance, today Islamic societies are the most morally-bankrupt entities which are maniacally fixated with religion while ranking lowest on every ethical factor: freethinking, integrity and humanity!

A word to Muslims:

A house which is not periodically cleaned is deemed to turn filthy and a faith which is not reformed with time is definite to become incompatible with evolving liberal and humanitarian standards. Muslims are the most unfortunate to have a venomous leadership which guides them in an incredibly inhuman path, as the course to Heaven.

Do Muslims even realize that only their leaders are clinging on to ‘nothing could be changed in Islam’,  pushing the believers to Dark Ages while Hinduism, Judaism and Christianity which were revealed to mankind much earlier have brilliantly purged the negative elements of their faiths and do not invoke Manusmirit, Halakha or Biblical law to run the state?

How have Muslims shaped up their conduct? Scream for Sharia in non-Muslim nations while you leave the Islamic lands for progressive and free societies; go on a mosque-building spree even as minorities but destroy churches, temples, synagogues as a majority; call those who fear terrorism and misogyny as Islamophobes while practising maniacal Islamofascism by placing Sharia above nation and Constitution, not giving an inch of your land while entering magnanimous nations in millions, getting citizenship and enjoying equal rights. Is this the most ‘virtuous’ course to enter Heaven?

Muslims are in an extremely hallucinating state to comprehend the cruel reality: Saudi preaches the poisonous philosophy, and believers practice it word to word and Pandora’s Box gets opened!  When the population is neck-stuck in blood, the ordinary lot has to spend their life begging for asylum in other non-Islamic nations. So, should we assume that the Supreme Commander of the Ummah will not open its door to asylum-seekers?

But they do to corrupt and brutal leaders like  Idi Amin of Uganda, Nawaz Shariff of Pakistan, Ali Abdulla Saleh of Yemen and Zine El Abedine Ben Ali of Tunisia. But millions and millions of wretched Muslim refugees all around the world, who primarily became victims because of Saudi’s virulent belief-system, do not receive any mercy from the Saudi Authorities!

Unless Muslims develop an inclusive, liberal and egalitarian outlook– benevolence, peace and progress will remain the exclusive domain of the non-Muslim society.  Complete revamp and reinterpretation of the faith is the only way to restore the authentic meaning of the religion, else Islam will decay as a destructive cult with a billion plus fanatical population.

A plea to Saudi Arabia:

Religion teaches humility, honesty and humanity but the faith doesn’t speak by itself– only leaders interpret the belief-system for the believers. Millions and millions respect every single word of these guides as God’s diktat. Hence, Saudi Arabia, as the Director who pours billions of petrodollars to lead Muslims, is fully responsible for the consequences its mindset causes to both the adherents and the non-adherents. With Muslims today being counted as the most feared community worldwide, will Saudi Arabia open its eyes to the dreaded fact that Muslims above five percent of population anywhere in the world is proving to be a ticking time-bomb? Does the Wahabi-Salafi Propagator comprehend that it has indoctrinated one and a half billion followers with neurotic supremacy, terrorism, violent oppression of dissent, misogyny, making Muslims unfit for pluralistic societies?

How beautifully the Muslims would have integrated with the world if only the Saudis had groomed the followers to respect all faiths, completely shun violence, assimilate with the local people and culture, be magnanimous in majority and constructive in minority, provide equal status to women, never demand special privilege with faith banner, face criticism with grace ..if only.

Today the other three major faiths are accommodative and progressive because they have shed off the baggage of destructive practices which were identified with these faiths– hence caste segregation, sati prata, dowry system of Hinduism; supremacy, death for apostasy, violence towards non-believers and blasphemy laws of Judaism and Christianity and misogyny of all these faiths are being vehemently opposed. But amazingly, under Islamic leadership you can dare to speak on Reformation only if you are prepared to be executed.

It’s incredible how the Islamic leadership injects the followers with destructive thinking from childhood: every constructive art is declared ‘haraam’ for Muslims– hence music, dance, drawing are forbidden and thousands and thousands of Muslim children are living zombie-life burying the aptitude within themselves.

Chess, a game of intellectual flair is absolutely prohibited and other physical sports also are not highly encouraged reducing any hope for emotional,  social or cerebral catharsis of the Muslim population.

Reinterpretation and Reformation can save Muslims from the inferno. When the entire population is stuck in a firestorm and also facing a mammoth tide of fear and hatred from the rest of the world, if Saudi Arabia doesn’t introspect the catastrophe now, will it ever?  If Saudi Arabia is averse to Reformed Islam then it is morally bound to take in all the refugees from all over the world who are the direct victims of its ideology. Will Saudi Arabia, the Decider of the fate of one and a half billion Muslims own up?

A Reminder to the Non-Muslim World:

The onus is on those nations which are generous enough to treat all faiths as equals, to hold Saudi Arabia accountable for the disaster that is tearing apart the globe. Muslims are not confined to any particular country or race for the world to consider it as, ‘internal affairs of a faith’. Saudi is selling cult-loaded tenets and the non-Muslim nations which are being bombarded to open borders for refugees have all the rights under the sun to take the Pied Piper to task.

Hanah Khan is a keen observer of religious totalitarianism and author of 'The Faith Strings.'