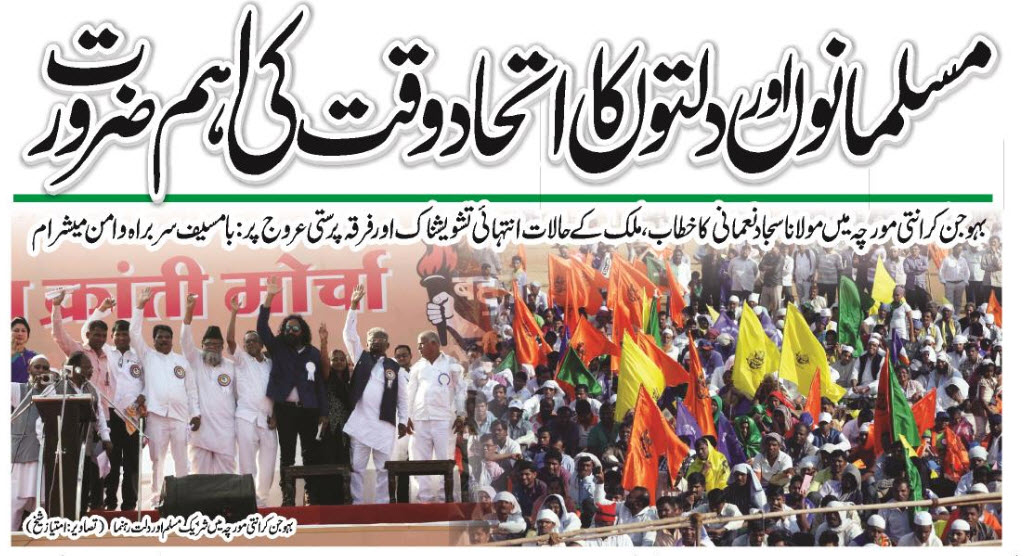 “Yeksan civil code thopa gaya to mulk mein takrao ke halaat paida ho jayen gein” – if the uniform civil code is imposed, situations of confrontation will emerge in the country. This is a banner headline of a five-column report carried on January 22 by Roznama Inquilab, a mass-circulated Urdu daily edited by a Muslim editor and owned by non-Muslims. The headline is a warning against any attempt by the Indian government to introduce the Uniform Civil Code (UCC), a code of desired rights for Indians irrespective of their religion, gender, caste or any other creed. The Indian state is directed by the Article 44 of the Constitution to draft and introduce the UCC.

If you are thinking that the warning was issued by an Islamic cleric, you are in for a rude shock. As per the report, it came from Waman Meshram, the chief of BAMCEF – short for the All India Backward (SC, ST, OBC) and Minority Communities Employees Federation. He made the statement at a mass rally organised by the Bahujan Kranti Morcha in Mumbai on January 21. As per Roznama Inquilab, Meshram stated: “The uniform civil code is not an issue of Muslims alone, but of other religions too. If it is imposed, situations of confrontation will emerge in the country.” It is indeed the case that the UCC, if and when implemented, will uphold individual rights of Indian citizens, removing discriminatory nature of personal laws of different religious communities.

Notwithstanding Meshram’s statement against the UCC, at present the only opposition to the UCC comes not from non-Muslim communities, but from Indian Muslims whose leaders, like every other person, do not know what specifics will likely constitute the UCC. The Indian government has launched public consultation to draft the UCC. Elsewhere, this writer has drafted and released a 12-clause UCC for wider consultation. Since, religious communities other than Muslims are not opposed to the UCC, not as yet, it becomes relevant to understand why Meshram issued the warning in an address to predominantly a Muslim audience. Several non-Muslim leaders who spoke on the occasion included Jeevan Bhalerao, Tansen Manore and Ashok Chauhan.

In recent years, as well as before, the Islamist leaders of the Jamiat Ulema-e-Hind, the Jamaat-e-Islami Hind and other religious organisations in India have diligently sought to court Dalit leaders to advance their own Islamist agenda. So, it is not surprising that the rally was addressed by Islamic scholar Maulana Khalilur Rahman Sajjad Nomani, a member of the All India Muslim Personal Law Board, which opposes the UCC and has been at the forefront to defend the anti-women practice of unilateral instant triple talaq (divorce). As per Roznama Inquilab, the Mumbai rally was attended by Muslims in large numbers, among the audiences being Dalits, Muslims, Sikhs, Lingayats, Buddhists, Christian, Banjara and other backward castes. The report does not make it clear, if the lower caste Muslims attended the rally or not.

Addressing the rally, Maulana Sajjad Nomani said: “The country’s history has been that there has never been a Hindu-Muslim or Sikh-Muslim or Christian-Muslim issue in this country; rather, for two-and-a-half to three thousands of years it has been an issue between the tyrant and the victims. Whenever real issues emerge before the people, their attention is diverted in other direction.” He told the audience: “Muslims! Understand the circumstances and do not respond to the manoeuvres of this game of chess by anger…” Several Islamic leaders who addressed the rally included Maulana Shahid Moeen Qasmi, Maulana Mahmood Khan Daryabadi, Dr. Azimuddin and others.

According to another report in Roznama Urdu Times of January 22, Maulana Sajjad Nomani also launched an attack on upper castes Hindus, stating: “Ever since the country became independent, the Manuwadis (i.e. upper caste Brahmins) started creating a rift between Hindus and Muslims.” He added: “I do not consider Mahatma Gandhi a mahatma (i.e. great).” As per another report in the newspaper Mumbai Urdu News, Maulana Sajjad Nomani told the rally: “Communalism has become so widespread in the country that everyone is engaged in sowing the seeds of hate. In such a situation, this alliance of Dalits and Muslims has been established to carry along the brothers of the nation including the Dalit brothers.”

Although Maulana Sajjad Nomani camouflages his agenda in the language of harmony, his precise purpose is also divisive – i.e. to divide Hindus so that the Islamist agenda of the All Indian Muslim Personal Law Board either against the UCC or in favour of retaining the anti-women practice of instant triple talaq can be sustained. Maulana Sajjad Nomani and other Islamists of his type know that public opinion in India is changing fast in favour Muslim women’s rights, especially the right to equality and non-discrimination based on gender as guaranteed by the Constitution. And this Islamist agenda of the All India Muslim Personal Law Board is being supported by some Dalit leaders, much like Mahatma Gandhi supported the Khilafat Movement launched by the Indian Islamists.