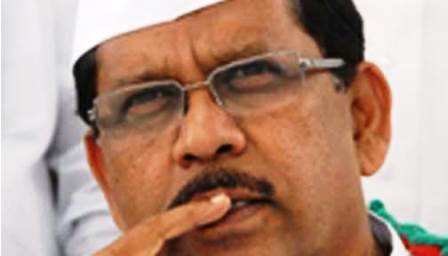 Assertion: Speaking at a workshop held to chalk out schemes for minorities, Karnataka Congress party Chief G. Parameshwar suggested that

The Karnataka Minorities Development Corporation, instead of sanctioning small loans, should sanction huge amounts like Rs 50 lakh. It does not matter if the beneficiaries don’t repay the loans….It is part of the development process

He immediately came under severe attack from all quarters, including from his own party’s Chief Minister, Siddaramaiah who was embarrassed by this. When Parameshwar realized the enormity of the damage, he claimed that “his statement was wrongly interpreted.”

On Saturday, 5 October 2013, the Karnataka Congress held a workshop in Bangalore on devising schemes for minorities. This was attended by prominent Muslim leaders of the Congress party including Jaffer Sharief, Qamarul Islam, K. Rahman Khan, Roshan Baig and Naseer Ahmed. It was on this occasion that the KPCC president, G. Parameshwar who lost the 2013 Assembly Elections made the aforementioned statement. His statement in the original Kannada reads, “Topi hakidre parvagilla,” which literally means “it is okay if they (Muslims) put a cap on the Government’s head.” This is colloquial for saying “it is okay if they cheat.”

It is not entirely far off the mark to say that Parameshwar’s statement was made in the light of further appeasing Muslims in the run up to the upcoming Lok Sabha elections.

There’s no ambiguity that Parameshwar’s statement is openly communal, and is comparable to Salman Khurshid’s promise of providing increased quotas to Muslims during the 2010 Uttar Pradesh Assembly election campaign. In fact, it is even worse because Parameshwar brazenly mocks not just the voters who elected his party but insults the hard work of honest taxpayers. One wonders what moral compass guides Parameshwar when he claims that it is okay for one section of the society to cheat the rest.

No matter how hard Parameshwar tries to downplay his audacious statement, it is true that he made it.