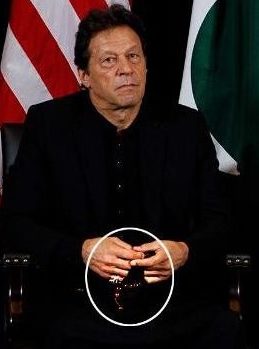 It has been reported that superstition holds sway among many sections of Pakistani society.[1] Imran Khan was seen holding prayer beads while meeting Donald Trump. Khan’s current wife is his former spiritual advisor, Bushra Bibi, who is said to possess two meat-eating Jinns.[2] Former president, Asif Zardari, used to have one black goat sacrificed daily to ward off the “evil eye”.[3] The “science of Jinns” is studied in universities.[4]

Belief in Jinns, black magic and related paraphernalia appear to have taken hold in Pakistan. Although some claim that these beliefs are a form of shirk (polytheism) – an unpardonable sin in Islam – such an argument does not hold since these beliefs, including Jinns, have Koranic sanction.[5]

Before Islam arose in the Arab world, Jinns were part of the daily life of the Arab polytheist. Later, Islam appropriated the Jinns for its own use and began to apply the term to the pre-Islamic gods.[6] Then, in true monotheist fashion, a binding uniformity in belief was enforced upon all its followers.

Every group that accepts Islam is required to use Islam alone as the only identity while giving up everything else. The artefacts cast aside includes ancestral culture, beliefs and even the nationality of one’s birth. As a result, societies like Pakistan eventually began to imitate the eccentricities of Arab Islamic society.[7]

When looked at from a historical viewpoint, these and other instances can be shown to illustrate how polytheism influences and guides the monotheisms in many subtle and a few obvious ways. To understand this in further detail, a brief background of where and how the monotheisms arose are necessary. Then, the final consequences of a society adopting monotheism can be seen.

Alongside Islam, the other two monotheisms – Judaism and Christianity – also arose in regions where Semitic languages like Hebrew, Aramaic and Arabic were spoken. Thus, all three Abrahamic monotheist religions share a common Semitic heritage.

When Islam was founded as an Abrahamic religion, it copied many things from Christianity and Judaism. A fundamental aspect of Semitic monotheism is the insistence that all other gods, other than their own single god, are false. This belief arose with the founder patriarch, Abraham, who was born a polytheist[8] but became a monotheist when the male god, Yahweh, gave him a revelation. Yahweh told him to settle in the land of Canaan, located near modern-day Israel.[9]

Goddess Asherah used to be worshipped as the consort of Yahweh, who later became the sole, exclusive god of the Christians and Jews (source: Google)

The polytheist Canaanite tribes worshipped Yahweh, his wife, goddess Asherah alongside a pantheon of other deities.[10] Abraham’s followers, who came to be known as Israelites, were taught to destroy the icons of all deities.[11] The Israelites then were exiled to Egypt. Later when they returned to Canaan, they committed genocide of the polytheist tribes of Canaan who worshipped other gods.[12]

With the onset of monotheism, the worship of the divine in the female form was brought to a complete stop. The Koran references the goddesses Al-Uzza, Mannat and Al Lat, who were widely worshipped in pre-Islamic Arabia.[13] Prophet Mohammed commanded his followers to fight a war against the Arab polytheists and then swayed the Arab tribes into rejecting the worship of any other god other than Allah. Allah was later proclaimed to be the same as the Biblical Yahweh.[14] Thus, the feminine ceased to be worshipped among the Arabs too.

Thus, a form of deicide was committed by disavowing all other deities including the goddesses and the divine consorts. A single, jealous, violent god began to be worshipped in an exclusive manner. It is a matter of speculation as to what the ultimate consequence of a civilisation being forced to give up their ancestral gods and culture would be.

As a next step, the monotheist religions naturally degraded the status of women. For example, many matrilineal lineages that existed in Pre-Islamic Arabia were ended.[15]

Also, extreme violence was adopted as being sanctioned by “God’s will” in trying to gain followers or to conquer territories.[16] Any form of peaceful co-existence, sustainable living or even a concern for the environment was viewed as unacceptable in monotheism. Other human beings, nature and the earth itself were seen as bounty to be enjoyed by the men of the “chosen people”.[17]

In order to establish the religion on a firm footing and to reclaim legitimacy in the eyes of the Arabic tribes, many practices, rituals, beliefs and symbols of the ancient Arab polytheist religion were appropriated into the new religion of Islam. Thus, a limited set of pagan symbols, rituals and beliefs were consecrated as having sanction. All other symbols, icons, rituals, and beliefs were condemned as heretical.

In another example, pilgrims perform circumambulation of the Kaaba seven times in a specific way during Hajj and Umrah. Then, the pilgrims walk seven times back and forth between the hills of Al-Safa and Al-Marwah.[20] Pilgrims then ritually shave their heads as part of the Halq ceremony.[21]

In pre-Islamic times, Hubal, the moon deity, was one of the gods worshiped in Mecca.[22] In neighbouring Mesopotamia, the moon deity was known as Sin.[23] The Crescent was the symbol of the moon deity. At the Battle of Badr, Abu Sufyan, the enemy of the Muslims, praised the high position of Hubal, saying “Show your superiority O Hubal!”.[24] With the onset of Islam, the moon deity was disavowed.

Also, since Islam follows the Lunar calendar, the sighting of the moon is crucial to know when the observances like Ramadan or Eid should begin. Most minarets attached to mosques are topped with the symbol of the crescent moon. Many Islamic countries carry the crescent moon in their flags. The Crescent is today a universal symbol for Islam.

Monotheists see themselves as the “chosen people” who have a covenant with the “only one true god”. This eventually leads to a form of supremacism. Violence against non-believers and a destructive zeal for conversion, annihilation and conquest gains the status of normalised and exalted practice.[25]

In Pakistan, Sufi Barelvi and Deboandi Sunni extremists have been carrying out acts of terror.[26] Shias have faced many bombings and attacks by Sunnis. Hindus, Ahmadis, and other non-Muslim minorities live under constant threat of violence.[27]

Alongside human casualties, monotheist conquest also means the complete annihilation of the heritage and culture of the conquered people. For example, most of the “Turks” of modern-day Turkey are not just descendants of the Central Asian Oghuz Turks who originally conquered Constantinople under Mehmed. They have very prominent ancestry from Anatolian Greeks and other peoples of the erstwhile Byzantine empire. Until DNA testing technology became available, this fact about their heritage was almost erased from collective memory for more than 500 years.[28]

Any human activity that is even slightly opposed to control and dominance becomes a problem. In 2017, Turkey stopped teaching evolution in schools.[29] In Saudi Arabia and other Islamic countries, including Pakistan, evolution either is not taught or is taught alongside creationist theories.[30] Afghanistan’s culture of music was erased under Islamist rule.[31] Cinema halls have been closed in the Kashmir Valley since 1990 under the threat of violence by Islamists.[32]

40 years ago, Iran went through a collective trauma after the Islamic revolution of 1979 which crippled the country and created a lost generation. The leader of this revolution, Ayatollah Khomeini, explicitly sought to impose the Islamic identity (Ummah) as supreme and denied that Iranians had any other identity or even a nationality of their own.

Prior to the revolution, King Mohammad Reza Pahlavi had tried to revive the pre-Islamic heritage and even celebrated 2500 years of Iranian monarchy. Also, he had revived the ancient Persian calendar of 2500 years in place of the Islamic calendar.[33] This was anathema to the Mullahs who led the revolution to depose him.

After the revolution, the Mullahs tried to ban even the celebration of the Persian New Year, Nowruz, as it reminded Iranians of their pre-Islamic national heritage. However, the ban was unsuccessful as Nowruz instead began to be celebrated with greater vigour than before.[34]

Thanks to the monotheistic impulse towards extreme uniformity and conformance, Pakistani society has adopted all the eccentricities and quirks of Arab Islamic society.

The rich polytheist civilisations of Mesopotamia and Persia were laid to rest thanks to monotheism, which, at the same time, digested several ancient, polytheistic symbols and beliefs. After the worship of the ancestral gods as well as the female aspect of the Divine was stopped, any ideas of sustainability or peaceful coexistence was eradicated in monotheistic societies.

It can be noted that when a society comes under the spell of monotheism, human life is forced to become nearly worthless and strife becomes widespread. One approach to deal with such a realisation is to try and find out about one’s ancestors and the gods they used to worship and the culture they used to follow.

Like how the Europeans discovered the Greek and Roman heritage during the Renaissance, this could directly lead to national revivals and could take societies out of the Dark Ages. Along these lines, recently, some Iranians and Kurds are rediscovering and reviving the ancient religion of Zoroastrianism.[35] It remains to be seen if the worship of the deity, Mithra (or Mihr), who was widely adored in pre-Islamic Persia, will also be revived.[36]

[15] Korotayev, Andrey. Were There Any Truly Matrilineal Lineages in The Arabian Peninsula? (1995)

[16] Parisien, Pierre. Blood and the Covenant: The Historical Consequences of the Contract with God (2010)

[26] Pakistan and the Rise of Barelvi Sunni Extremism

[29] In Turkey, Schools Will Stop Teaching Evolution This Fall

[30] Teaching Evolution in the Middle East

[32] Cinema halls are first fatality of militancy in Kashmir

The religion that the Iranian Mullahs fear most

Letter to Hindus I– Beware of Popery!