Krishna and Narakasura: The Tale of Dharma Asserting Over Adharma 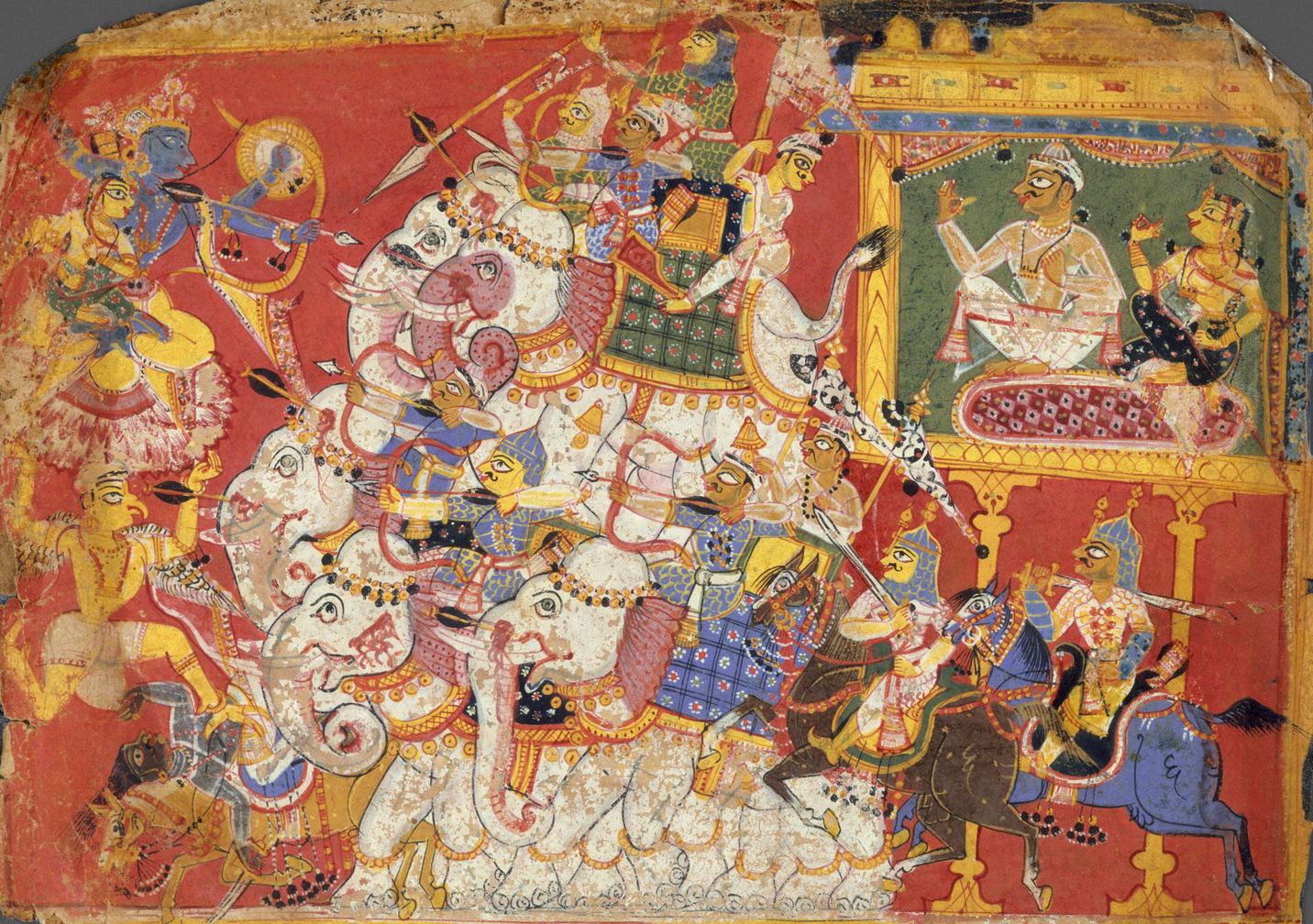 Naraka Chaturdashi, the fourteenth day of the darker fortnight of the month of Ashvayuja is celebrated as the day of Narakasura’s deliverance in the hands of Lord Krishna. As children, we have all heard of this story where we are told that Good prevails over evil. While it seems so at a macro level, the words good and evil are often used as a reductionist translation of Dharma and Adharma, while the gravity of Dharma is far more complex and dynamic than just ‘good’ (Same is the case with Adharma and evil). The root word from which the term Dharma is derived from is ‘Dhr’ which means to uphold, maintain, keep or preserve.

In the Hindu Puranic corpus, Narakasura comes across as one of the most interesting characters. His birth, his identity as well as his death has been narrated in a variety of versions, each celebrating its own unique central theme: from the protection of women to valour of women.

According to Srimad Bhagavatam, Narakasura is also referred to as Bhauma, the son of Bhumi. The later Puranas, including Brahmapurana have mentioned that he was conceived by Bhumi during the Varaha Avatar. He was the ruler of Pragjyotisha (Modern Assam) who had stolen treasures from Devaloka including the earrings of Aditi and kidnapped 16,000 women. Indra sought the aid of Krishna, the Lord of Dwaraka. Krishna attacks Pragjyotisha, accompanied by one of his spouses Satyabhama and breaks the formidable fortification of the province, fights and kills the commander Mura (thereby earning the epithet Murari). He also kills the seven sons of Bhauma. Bhauma, then attacks Krishna with several missiles, including Shataghni, the spiked weapon, a Shakti, which had once bettered the thunderbolt of Indra and finally, a Trident at which Krishna deploys his Sudarshana Chakra and severs Bhauma’s head.

Heeding the prayers of Bhumi, the mother of Bhauma, Krishna installs Bhauma’s son Bhagadatta as the ruler of Pragjyotisha and retrieves the stolen treasures to return them to their respective rightful owners. He also marries the kidnapped women to facilitate them to have a dignified life ahead.

It is intriguing as Bhagavatam does not explain why Satyabhama accompanied Krishna and why a demoniac son like Bhauma was born to Bhumi and Mahavishnu (in his Varaha-Avatar). It could also be a bit confusing to the readers of Mahabharata where Bhagadatta, the son of Bhauma is mentioned as a senior warrior, who fought from the side of Kauravas (a stark contrast to other sons of those kings killed by Krishna like Sahadeva, the son of Jarasandha and Drishtaketu, the son of Sishupala, who fought for the Pandavas) and not as the fearful boy who submitted to the mercy of Krishna and protected by him because of Bhumi’s prayers.

In Andhra Mahabhagavatam, a 15th Century work composed by Bammera Pothana, Satyabhama’s presence is not just ornamental. When Krishna faints out of fatigue, she engages Bhauma in a fierce battle till Krishna recovers and kills Bhauma with the Sudarshana Chakra. Other South Indian texts narrating this event have extolled Satyabhama as the incarnation of Bhumidevi (Rukmini being the incarnation of Sridevi). It is also believed that Bhauma could be killed only in the hands of his own mother, a boon he cleverly elicits taking for granted that a mother cannot kill her own son however wicked he is. Bhauma thinks that this boon effectively makes him immortal and invincible. Satyabhama being an incarnation of Bhumi could slay him, personifying female valour.

The Perspective of Shakta texts

The Shakta texts like Kalika Purana introduce yet another facet of Bhauma that he was a worshipper of Devi (if you are one of those who declared your allegiance to Mahishasura against Devi, do please be advised to stay away from Bhauma!). He was most probably a practitioner of the Vamachara order of Shaktism (as was believed to be followed at the temple of Kamakhya, Kamrup where he ruled). In the book,” Legends and Temples of Assam” authored by BK Barua and HV Sreenivasa Murthy (published by Bharatiya Vidya Bhavan), Kalika Purana is quoted where Bhauma is believed to have been led astray by the King Bana of Shonita, who is also believed to be the son of Mahabali and a devotee of Shiva. (Readers of Bhagavatam would meet him in the episode of Usha Parinayam or the marriage of Usha and Aniruddha).

According to this legend, Bhauma was installed on the throne of Pragjyotisha by his biological father Lord Vishnu himself. He was instructed to worship the presiding deity of Kamakhya with single minded devotion and treat Brahmanas with respect. But fate brought him closer to Bana of Shonita pura (believed to be modern Tezpur). Under the influence of Bana, Bhauma is said to have become presumptuous and irreligious to the extent that he denied Rishi Vashishta, entry to the shrine of Kamakhya and was cursed to die in the hands of his own father Vishnu.

According to Kalika Purana, it is said that Goddess Kamakhya once appeared to Bhauma and he, enamoured by her beauty, desired her. The Goddess put in a condition that Bhauma should build a temple, a tank and stairs from the foothills to the shrine before the break of dawn. While Bhauma was set upon the task, the Goddess tricked him by inspiring a cock to crow much before dawn. Angry at the bird which frustrated his attempt, Bhauma killed the cock (the place where he is believed to have done so is called Kukurakata Chaki). This is believed to have incurred the wrath of the Goddess.

Naraka Chaturdashi, the day when Naraka/Bhauma was killed is also celebrated as Kali Chaudas when the Goddess Kali is believed to have assisted Vishnu/Krishna in killing Bhauma. While the differing interpretations can continue about the mystery of who killed Bhauma (Whether it was Satyabhama, Krishna or Kali), studying the incident in the interstices of Mahabharata would provide an interesting angle. During the Rajasuya campaign, Arjuna is believed to have faced and defeated Bhagadatta of Pragjyotisha. It could be deduced that the killing of Bhauma in the hands of Krishna would have happened much before Arjuna’s arrival at Pragjyotisha.

The women kidnapped by Bhauma are mentioned to be of royal (or noble) birth. Now an incident of this order escaping the notice of geographically closer and powerful Kings like Jarasandha, Drupada or even the Kurus while Krishna, literally at the other end of India gets to know about it seems hard to believe. One could guess that the number 16,000 is an exaggeration. (Not to speak of the possibility of imprisoning so many women in the small town of Kamarupa). But if one attempts to reconcile the Shakta origins of Bhauma, the Vama/Kaula practices prevalent at Kamakhya with the abduction of women as mentioned in the Bhagavatam, it is noteworthy that women are an important aspect of Devi worship. Shakta worship of the Kaula order (which was believed to be in vogue in Kamarupa) also includes Maithuna or the ritual of sexual union. One could speculate if the abducted women were forced into the ritual by Bhauma (It should also be noted that the tenets of Shakta worship clearly mention that forcing a woman is a sin against the Goddess. If Bhauma forced women, he was flouting the instructions of the very Goddess he ‘worshipped.’)

Apparently, their ordeals did not end with the death of Bhauma. The tough life that faced them with their families not accepting them back out of fear of ridicule and their continued life of peril threatened to undo the very purpose of killing Naraka. Krishna was faced with this challenge of so many women being thrown out of the mainstream life on the eve of Rajasuya of the Pandavas, for which he was the key mentor. Marrying these women to ensure their dignity surprisingly, has earned him ridicule in the modern era! (Ironically, most of this ridicule is heard from the very same corners which deride Lord Rama over his supposed abandonment of Seeta). But for the one, who embraced an abuse like Ranachor, would ridicule from such confused (or hateful?) corners even matter?

In his thesis, “Krishna, a study in the theory of Avatars”, the eminent scholar, freedom fighter and Bharat Ratna Awardee, Dr. Bhagavan Das, categorises the types of Avatars as men of thought, emotion and action. He observes that Krishna was a Poornavatara or a complete Avatara welding the thought, emotion and action together, given his contributions as a teacher, thinker, strategist and a warrior.

The message Deepavali, of the victory of ‘good over evil’ needs a nuanced understanding as the victory of Dharma over Adharma. Often in a situation of conflict, when one needs to take a side, he or she would possibly find flaws in everyone. Choosing the side of Dharma over Adharma does not mean that there is a perfect force confronting the imperfect force. K.M Munshi in his Krishnavatara, details a contemplative chapter where Krishna muses on the definition of Dharma. He concludes that ‘Dharma is not merely a hope. Nor speculation. Nor rituals. Nothing which is inspired by anger, greed or fear…. It is the will to shape oneself, men and situations, by rising above weaknesses. Not only that, but Dharma for each one is, to weld the vision, the will and the deed – they are not three but one – so that he may strive, each in his own way, to live in All – VAASUDEVA – so that All may live in him.’

In the context of Narakasura Vadha, Krishna knew that Adharma did not end with the killing of the wayward Bhauma. Condemnation of the guileless women by the rigid societal norms for no mistake of theirs is also Adharma and Krishna, by marrying those women, prevented that Adharma as well. Some would dismiss even this as an act of patronisation. But this Dharma over Adharma, if duly contemplated, is a result of a continuous process of internal evolution than of a single bout of external confrontation.

The lamps of Deepavali, I pray, should help us realize that path of evolution which strengthens this civilization. A step in this path makes us all Krishnas in our own capacities.