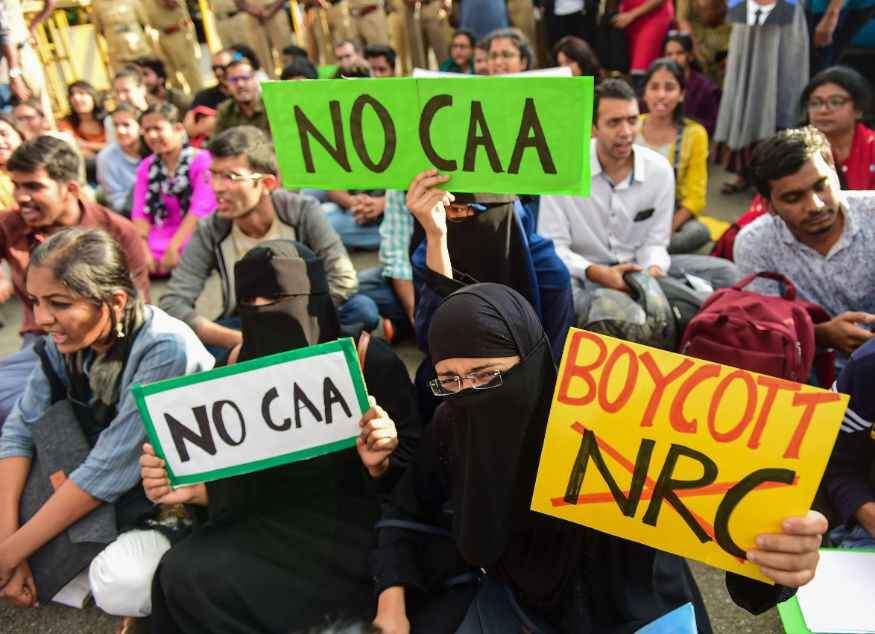 The continuous anti-CAA-NPR-NRC protests which have brought about violence and havoc in the streets of Delhi and many other regions of the nation are a perfect example of the Goebbelsian methodology of spinning and spreading false narratives. I was witness to one such instance on 27th February, when a protest and boycotting of classes was organized by some of the “concerned” students across my university, i.e., O.P. Jindal Global University in Sonipat. The protest gave me a first-hand experience of the mechanism of creation and propagation of false narratives and the garnering of legitimacy for the same. The protest was witness to a large mass of students from various schools of Jindal (though not from all walks of life, as most students come from privileged elite classes), supported actively by various faculty members (notwithstanding the fact that the faculty members in our university are prohibited from involvement in student-led “political” activities) including some of the doyens of the field of law and social sciences. Some of the faculty members, as is often witnessed across universities, delivered charged-up speeches on the “sorry state of affairs” in the country. Much of all this hubris was much expected, considering the fact that our university spaces are very well dominated by the Left, both within the faculty and student communities. Through the use of subtle coercion, peer pressure and outright brainwashing, topped-up with the manufactured “legitimacy” provided to the protest by the support of law professors, a section of the student community was able to establish its one-sided, ideologically motivated anti-CAA-NRC, anti-BJP-RSS narrative as the true representation of the anti-CAA fiasco in Delhi, and was able to convince by hook and by crook, many of the students who were not a part of the law school.

This fiasco started on the eve of 26th February 2020 when pretty much all our social media groups were spammed with continuous long messages and posters calling for a boycott of classes on the coming date that was 27th February 2020, for the purpose of showing “visible solidarity with the Muslim minorities on the campus,” “solidarity with protestors outside on the terms that they’ve asked for it,” and for “converting our sanitized private university space into a more political one”. The protest posters being circulated on class WhatsApp groups exposed the communally biased narrative of Hindus attacking Muslims and their religious institutions, and this narrative was to be peddled at the protest venue.

The primary aim of this calling for the boycott of classes was primarily to stand up and actively condemn the horrific on-going violence in Delhi. However, on its face, it seemed very neutral and impartial, but when the protest really started, it was just a platform used to narrate and propagate false agendas. Although most students went to the protest site for showing solidarity for the people who have been affected and also lost their lives in the on-going violence in Delhi, the emotions of such students were misused by certain groups of individuals to harness their personal agendas. The showing of solidarity for all suddenly turned into showing of solidarity for Muslims who were affected and lost their lives; the non-muslims, police officials, defence personnel, and the IB officer (who was mercilessly stabbed 400 times before throwing him in the drain) who too lost their lives, and their loved ones, were all sidelined and neglected. Solidarity was shown to the aunties of Shaheen bagh, who were sitting and protesting against CAA-NPR-NRC, but not to the common people of Delhi who had nothing to do with it, and were just trying to earn a livelihood for themselves and their families, but yet lost their lives in this horrific state of violence.

The agenda of the protest suddenly changed from condemning the violence to raising slogans against the CAA-NPR-NRC and the current Prime Minister and Home Minister of India.

This was primarily led by a certain group of law students who sat down and explained to other non-law students as to why the new law was problematic, with a presentation of facts and figures which just suited the one-sided agenda and false narratives of a certain few. The non-law students were made to believe that what was being told to them was the ultimate truth. This agenda of a certain few gained legitimacy when scholars such as Professor M.P. Singh, who is considered to be a doyen of Constitutional law in India, came up to the students protesting and expressed their happiness and satisfaction seeing students of Jindal protesting, and expressly supported the cause of students protesting in Jindal.

As I mentioned above, faculty members too openly supported the cause of the certain few by joining the protest, formally and informally cancelling classes (and also giving free attendance as perks to attend the protest) despite a strict direction from the University admin asking them not to, and by influencing other students to not use the time gained from the cancelled classes as a holiday, rather to go and be a part of the protest all day long.

The irony of the protest was that it was being held right under the Indian flag, hoisted at the center of our university. The entire picture became crystal clear when one started to hear slogans like “Azadi”, “Hum Dekhenge”, “Jai Bhim” and “Laal Salaam” from the crowds. These slogans were the culmination of a left-liberal agenda behind the protests. In the name of condemning violence, the ideologically brainwashed students were largely successful in painting a one-sided picture of the violence (as being perpetrated only against Muslims), and also pushing an anti-CAA-NPR-NRC narrative. The protest was an elaborate explainer of the procedure for manufacturing false narratives – firstly, setting up a false background for the protest, secondly, pushing left-liberal narratives and showing the incumbent government in a bad light without much evidence, and finally, providing legitimacy by using the names of intellectual bigshots. That’s how a left-liberal ecosystem functions!

Note: Kunal Varma is a pseudonym. The author wants to remain anonymous.