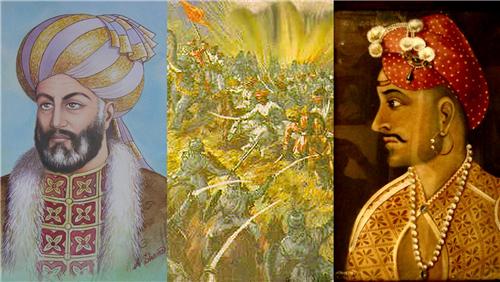 In the previous two parts of this series, we saw how the Marathas came to influence Bundelkhand right from the time of Chhatrapati Shivaji. The article on Chhatrapati Shivaji showed the first instance of contact between the two far flung people in the 1660s.  Fast forward to the 1730s and this time Peshwa Bajirao appeared as the saviour of Bundelkhand against Afghan aggression which I had covered in second part.

Bajirao Peshwa assumed control of a third of Bundelkhand, which was bequeathed to him by Maharaja Chhatrasal Bundele. From about 1733 to 1740, things were more or less smooth in the province with the various Bundele chieftains accepting Peshwa Bajirao’s suzerainty. But cracks started developing almost immediately after the Peshwa’s death in April 1740. Nanasaheb, the new Peshwa, was merely twenty years old and still coming to grips with the wide spread domains he had gained from his illustrious predecessor. He never commanded authority over even other Maratha sardars the way Bajirao did. And so, not believing much in the new Peshwa’s authority, chauth and other sources of tribute from Bundelkhand came down to a trickle. Although Maratha authority in Bundelkhand still held, it was getting difficult to manage affairs from Pune.

In 1742, Nanasaheb Peshwa undertook one of his rare journey’s to the north. With the aid of Naro Shankar Motiwale, order was restored to large swathes of Bundelkhand. Naro Shankar was put in charge of Jhansi, and after that fort had come under the firm control of the Marathas, he strengthened it appreciably. Many new ramparts, walls etc. were built. Much of what we see today as the fort of Jhansi is Naro Shankar Motiwale’s work. Elsewhere, such as Orccha, where the king had openly defied Maratha authority, Nanasaheb Peshwa attacked and reduced the place to submission. In fact, at Orchha, a pair of donkeys was made to plough the land once Maratha control had been re-imposed.

From then on, for the next decade or so, there was not much tumult in Bundelkhand. A small innocuous event happened in 1756 – Naro Shankar Motiwale was transferred to Malegaon by the Peshwa. It was a typical sarkari transfer, which showed that the Marathas could also juggle subhedars and sardars like the Mughal Empire of yesteryears. Raghunath Hari Newalkar was appointed in his place. It would have been a forgotten footnote in history, but for events that happened almost exactly a century later – when Manikarnika Tambe married into the Newalkar clan! More of that in Part IV.

But the events that would link Bundelkhand to Panipat were centred around a different person – Govindpant Bundele.

Govindpant Bundele was born as Govindpant Ballal Kher in the Konkan region of Maharashtra. It was his long association with Bundelkhand that got him the nickname “Bundele”. His abilities with civil administration and finances impressed Peshwa Bajirao, who gave him a position of responsibility in Bundelkhand around 1735/36. Bundele ensured that large amounts of tribute regularly reached Pune from Bundelkhand. He also established the town of Sagar. In fact, by the time the latter half of the 1750s dawned, he was already in the province for over twenty years! The amount of experience coupled with his natural talents for administration had made him indispensable to the Peshwa and others at Pune and had also generated a lot of respect in the minds of Hingane, Antaji Mankeshwar and other Maratha sardars stationed for lengthy periods of time in the north. His younger brother being present in Pune, communication between the two was smooth and tributes in the region of ten lakh per annum regularly reached Shaniwarwada.

The importance of Bundelkhand

As described in part II, Bundelkhand was situated in an extremely strategic location in the Indian plains. It formed a “pivot” for various regions and stood right between Malwa, where Maratha control was strong, and Delhi – Punjab region, where Maratha control was so – so. Thus, the importance of Bundelkhand as a region, which could readily supply provisions, money, and soldiers to armies stationed north was immense. Likewise, Govindpant Bundele wanted the province to be periodically overseen by the Peshwa or his cousin Sadashivrao Bhau, rather than lesser chieftains or even his younger brother Raghunathrao. The strategic importance of Bundelkhand and its unique geographical location with relation to the whole of north India was not lost on Govindpant Bundele. In fact, he makes this amply clear in a letter to Sadashivrao Bhau (1755), where he makes a case for a powerful Maratha garrison to be permanently stationed in the north. A rough translation of the letter in Marathi, given by Sardesai:

“Hindustan requires a strong, permanent Maratha army. Only then can order be maintained. The whole area from Bundelkhand to Antarved must be strongly secured. Delhi is a chaotic place, all powers that be have their eyes on it. Maratha sardars and subhedars come north but then return with their armies. But for maintaining peace in Bundelkhand and our grip on Hindustan, an army of twenty thousand is needed at all times. These shall be well trained and regular soldiers under our pay, not irregular troops living by looting the land. Only then can peace be maintained for a long time and tribute obtained peacefully.”

This letter goes to show that not only did Govindpant Bundele have a good grasp of the location he was in , but also the fact that to control Hindustan, the Marathas would need to have a very strong presence to north of Gwalior as well. If his advice had been followed, perhaps the events of later years may not have happened. It is pertinent to note that Govindpant Bundele had joined the administration as a mere kamavisdar, and it was solely his experience of many years that was speaking.

The events which would eventually culminate in the Third Battle of Panipat (Jan 1761) were set in motion around 1755/56 with the Afghan invasion of Delhi, which ended with Najib ud Daulah being appointed the Amir ul Umrah at the Mughal court by Ahmed Shah Abdali. Large scale massacres were carried out in Mathura, Amritsar and other places. More than twenty eight thousand camels worth of loot found its way into Abdali’s hands. Ahmed Shah Abdali’s authority on north India’s politics had been stamped.

At this crucial juncture, Govindpant Bundele implored the Peshwa to journey to Bundelkhand himself or send Sadashivrao Bhau. But, instead, Raghunathrao was sent. With the help of others such as Holkar, Gupte, Manaji Paigude etc., Raghoba scored a series of victories – wresting back Delhi from Afghan hands and leading Maratha conquests all the way to the Indus and beyond – bringing even Attock and Peshawar under his sway. But battlefield prowess came at the cost of huge amounts of debt to the Maratha treasury. Also, his negotiating skills were nowhere close to Nanasaheb Peshwa and Sadashivrao Bhau. The importance of his Punjab conquest remained symbolic, nothing more.

Eventually in 1757, Govindpant Bundele himself went to Pune and met the Peshwa and Sadashivrao Bhau. Doubts were raised over the tribute he had submitted and Bundele promised to set the record straight by appointing two persons – Kanitkar and Erande to resolve the matter. Rajwade believes that a high degree of corruption was present in Govindpant Bundele’s work, but his actions and constant support for swarajya suggest otherwise, as is brought out by Sardesai.

By the time Govidpant Bundele returned north, Abdali’s armies had begun making forays into the Punjab and stitching alliances with various chieftains. Even Bundelkhand, taking advantage of the general collapse of Maratha authority all around, was becoming very difficult to manage. It was soon next to impossible to rely on it for regular supplies. It was to prevent this very eventuality that Govindpant Bundele had asked for a permanent garrison of twenty thousand!

It must always be borne in mind that Govindpant Bundele was merely a revenue collector, and never a seasoned general. Not having a strong military commander in the Bundelkhand region was a big drawback, which showed itself in January 1761.

Sadashivrao Bhau, Malharrao Holkar, Shinde, Gaikwad and many others started the journey to north in 1759 to finish Abdali and bring north India under their strong control. The events of the next two years are too numerous to be recounted here. To cut a long story short, Sadashivrao Bhau reached Panipat and Abdali was somewhere to the south. Bundelkhand was beyond Abdali. But there was a crucial difference – the Marathas were short of supplies or even a reliable region from where they could get supplies if needed. On the other hand, Abdali was getting plenty of provisions from various Rohilla chieftains. But, now sandwiched between Govindpant Bundele and Sadashivrao Bhau, the Marathas assumed that Abdali would be easily defeated if a pincer attack was mounted.

Sadashivrao bhau goaded Govindpant Bundele to attack Abdali from the rear. It would have the double effect of harassing Abdali and cutting off his food supplies. Abdali would have to force his way north into the Punjab, where the grand Maratha army under Sadashivrao Bhau was waiting.  It was a huge task for a kamavisdar. Abdali was no pushover. The attack by Govindpant Bundele was brave, although rather futile. The brave Bundele died fighting, against a hopelessly more powerful enemy (Dec 1760). The importance of Bundelkhand was never more evident for the Marathas!

Much can and has been said about Bhau’s decision to hand Govindpant such a crucial duty, which was well beyond his ken. It was one of the faults which led to Panipat.

Eventually, on the 30th of December 1760, Abdali completely closed the road leading south. The Marathas, waiting for Abdali to attack their entrenched and strong positions all this while, now found themselves in the reverse situation. Food was running out, supplies were scarce.

On the morning of the 14th of January 1761, Sadashivrao Bhau decided to break through Abdali’s defences – to hand him a defeat and place Vishwasrao on Delhi’s throne. The ensuing grand confrontation is today better known as the Third Battle of Panipat.