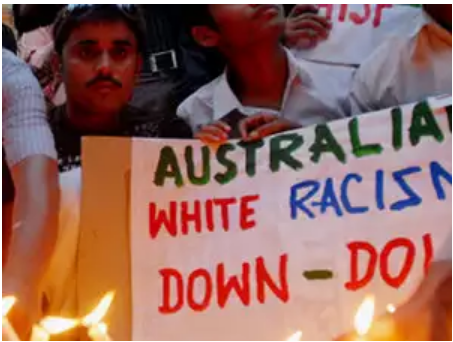 Anyone familiar with the Indian situation would easily realize that Emma Alberici’s story the world’s biggest lockdown aired in ABC  TV’s Foreign Correspondent show on 19 May 2020 is an example of superficial and motivated journalistic research. She did not delve deeper into the issue of migrant workers and mainly relied on the perfunctory analysis provided by an Indian journalist Barkha Dutt –a darling of world’s dreaded terrorist as well as that of the Indian National Congress (INC) — the main political opposition party in India.

The story begins with pictures of the crowd of migrant workers gathered at Anand Vihar in Delhi (28 March 2020) four days after the lockdown was announced by Prime Minister Modi which required that people stay put wherever they are so as to avoid the spread of COVID19. Yet in Delhi — a union territory- ruled by Aam Admi Party (AAP), it seems party politicians to shirk government responsibility allegedly spread a rumor among migrant workers that the neighbouring state government of Uttar Pradesh (UP) -a state ruled by the Modi’s Bhartiya Janata Party (BJP) — have arranged buses to take them home at the border between Delhi and UP.

The AAP government also provided local transport to the workers to gather at Anand Vihar. This was in flagrant defiance of Modi’s orders in order to create chaos in the political game of brinkmanship. The UP government had to rush to make arrangements for a medical check-up, food, and thereafter transportation of migrant workers to their villages after a mandatory quarantine of two weeks. After Modi’s intervention, the AAP government transported the migrant workers gathered back to their Delhi residences. Yet some migrants chose to walk crossing the state border to UP. Barkha was seen interviewing a few of the 10 or so migrant workers walking along the road. She does not tell us how the ‘’created crisis’’ was averted by the Modi government. Interestingly, neither Emma asks Barkha nor Barkha tells us why did the Delhi government of AAP fail in its responsibility to look after the migrant workers and left them in the lurch forcing them to walk.

Barkha is panting while walking at the worker’s pace and is shocked that migrant worker has to walk 200 km to reach his village. For Emma and Barkha walking that much of distance would be a great wonder. The walking migrant workers do not pay heed to Barkha and keep walking barely responding to her! It appears Barkha does not know that an average village woman walks up to 20 km daily to fetch water courtesy INC rule of 70 odd years and Emma is probably used to the Australian statistics of average 3 km walk per day. Of course, for those who walk only in public parks the mention of 200 km would come as a big surprise as was apparent in the reporting of Barkha.

Emma notes that migrant workers earn four Australian dollars per day. This would translate to approx. Rs 6,000 per month which equals the average monthly expenditure of a rural household as per NABARD study. In dollar terms, it would look a small amount that would not buy you even a cuppa in Australia. The concept of purchasing power is relevant here but the journalists do not seem to be familiar with it.

Emma is surprised that there is no legal protection or social security available to the migrant workers. Obviously, it shows a complete lack of understanding and serious research about the problems of India. These are not of Modi’s making but a legacy of the INC. Barkha wielded considerable clout when the INC was in power but never raised such issues. For example, there is no central database of migrant workers though legislation was passed 40 years ago to establish one. Labor is a concurrent subject, which means both the central and state governments can legislate and act. If Modi is to be held solely accountable for why the INC and non-BJP ruled states have not put in place relevant legislations?

Emma and Barkha then give the migrant workers plight the usual spin of caste-divide. But in this superficial research, neither of them cared to check that the by-caste proportion of migrant workers is similar to their proportion in the total population. It is usual rhetoric to use caste as soon as India mentioned but does Emma use such classification while describing situation in Australia? for example, how many white Australians or black or brown Australians were affected by COVID19? Why did she not run a story of COVID19 and its impact on Indigenous Australians?

Barkha notes there are 45 million migrant workers, though as per the Census of India the figure in 2011 was 450 million or approx. 30% of the total population of India, of which, the inter-state migrant number was about 54 million (12%). A large part of the migration is within the state. Neither Emma nor Barkha tells us what arrangements have been made by the INC and other non-BJP governments in their respective states for the remaining 400 million workers.

Emma finds fault that only four hours were given before the lockdown was announced but forgets that the purpose was to avoid infected people rushing to villages. But did Emma ask Modi government officials the rationale behind the short notice? One can easily discern that each country has unique features and problems and that has to be considered. Is this serious journalism that does not take into account the Indian canvas?

She then moves the story to the congregation of migrant workers in Mumbai- a state ruled by the INC — Emma and Burkha skillfully avoid mentioning that. The idea is to find fault with Modi for the incompetence or political machinations of states ruled by non-BJP parties.

Next Suzanne Arundhati Roy’s expertise is sought. Interestingly, she takes us back to the British Raj to explain why migrant flock to cities. This is the first time anyone would have seen Roy not blaming Modi! Her dog is pretty well fed it appears as she caresses the dog. Interestingly, this far-left activist does not tell us how many migrant workers she helped by providing food or shelter in her luxurious home.

Barkha then shows a family of two wives and four children and the husband who sold his mobile phone to feed the family. She could have asked the guy when he could not afford to feed his family why did he have two wives and four kids ab initio? But such hard and politically inconvenient questions are not to be asked when the sole purpose is to blame Modi.

Similarly, the plight of the poor — that eight people live in one room — is a legacy of INC. Did Barkha ever ask this question to Sonia Gandhi the INC President? Why after ruling India for much of the post-independence years the situation is so bad? Modi does not have a magic wand to set right overnight the mismanagement of decades.

What Emma Doesn’t Tell You

Neither Barkha nor Emma mention that since 01 May 2020 Modi government is running special trains to transport migrant workers from one state to the other and has by now transported over 1.5 million migrant workers at no cost to them. The government also provided them free food and other services in transit. It is the INC ruled state governments that have been recalcitrant in transporting the workers as the latest statement from the Railway Minister revealed but neither Emma nor Barkha mention this.

Emma does not mention that Modi received accolades from WHO, the US President, Brazil, Israel and others for the deft handling of COVID19 and providing the much needed hydroxychloroquine to 55 countries to fight the virus.

Emma mentions about police brutality but avoids mentioning the brutality of Muslim Tablighi Jamat against medicos and police. Barkha takes the viewers to Indore — precisely the city where medicos and police were spat at and beaten up by Tablighi. Why did Barkha cover this up?

There is mention of an obscure charity but there is no mention of Sewa Bharati — the charity of the RSS which has been the biggest NGO operating throughout India providing food and other facilities to the poor during COVID19.

To improve her standard of journalism, Emma would do well to research herself, seek the opinion of a well-studied journalist and scholars rather than INC party journalists and terrorist darling Barkha and known Modi-hater like Suzanne Arundhati Roy who is implicated in alleged illegal forest land grab case.

(PS: Incidentally, Barkha did a story on 25 May highlighting the work of the RSS in Nehru Nagar within a week of the publication of this article on 19 May in the Medium https://medium.com/@milindsathye/worlds-biggest-lockdown-viewers-deserve-better-quality-from-the-abc-16c7f0c1df55 It may be just a coincidence though or has the Enforcement Directorate sent a notice which is driving her new found love for the RSS?)

Disclaimer: The opinions expressed in this article are the personal opinions of the author. IndiaFacts does not assume any responsibility or liability for the accuracy, completeness, suitability, or validity of any information in this article

Australian media and its Biases, Contradictions and Colonial Propaganda on India