Mufti igniting dangerous fires even as the BJP naps 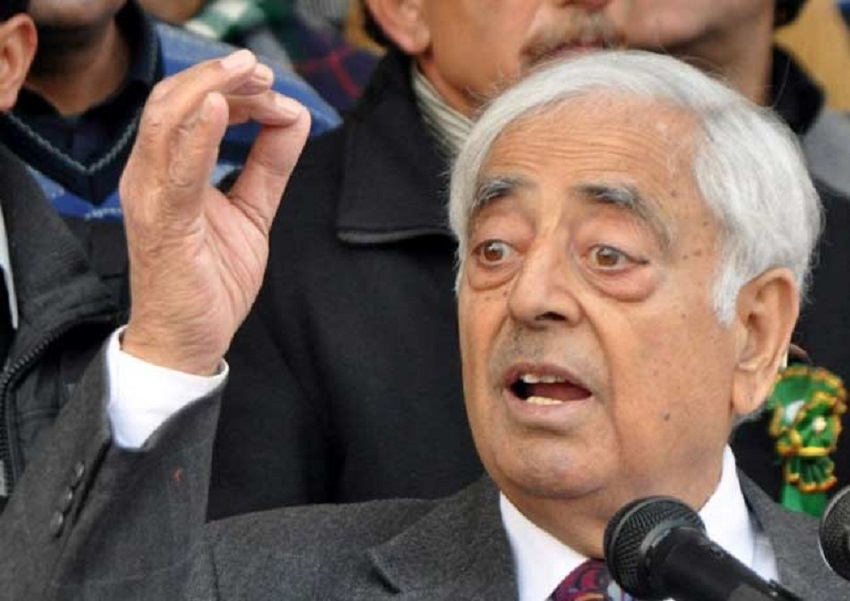 As they say if you don’t learn from mistakes, you are bound to repeat them. Back in the 1980s, Pakistan flags were seen during cricket matches in Jammu in Kashmir. From sporadic incidents that eventually grew into a pattern, it finally reached its climax in form of Armed insurgency at the behest of Pakistan, which marked one of the horrendous episodes of ethnic cleansing in the history of Independent India forcing lakhs of Kashmiri Hindus to become refugees in their own country. After fighting three wars with Pakistan and loosing what is now called POK due to the blunders of the then Prime Minister Jawaharlal Nehru, India was once again at the brink of a break up. But our Army and paramilitary forces saved the day by giving heavy sacrifices.

After the Kashmiri Pandit Exodus of 1990, the Army has, at a great price, not only saved our boundaries, but has been successful in subduing insurgency; of course, we are not yet near achieving normalcy in the troubled state but by every means we have managed to thwart every dirty trick of Pakistan. The huge success of the Indian Army and Intelligence agencies in dealing with the Pakistan-sponsored proxy war may be gauged from the simple fact that the erstwhile USSR and US-led NATO have successively failed to quell similar Pak-sponsored Islamist insurgencies in Afghanistan despite great arms superiority and economic might.

That is why when a common citizen of India once again sees a parade with Pak flags by bunch of marked Pakistan stooges collectively known as  Hurriyat  on the streets of Srinagar, he or she finds it worrisome and lots of questions arise in the mind about what the PDP-BJP coalition government is doing. Sadly the answer doesn’t appear very promising at the moment. The way the present PDP-BJP government in Jammu and Kashmir is being run is in complete disregard of the painful history without paying any heed to the fact of the cost our Armed forces have paid and are still saving the state from Pakistan-sponsored Jihadi locusts.

The coalition experiment whereby the BJP and PDP have been cobbled together through the CMP text for “greater good” and development of Jammu and Kashmir, has so far proved to be utterly superficial as far as the Indian National Interest is concerned. To start with, Chief Minister Mufti Sayeed began his tenure by thanking Pakistan and Hurriyat for creating a “conducive atmosphere for peaceful assembly elections ” to the horror of all Indians. Through this statement, he as the Chief Minister of an Indian state officially acknowledged the nuisance value of Hurriyat and the ability of Pakistan to interfere in Jammu and Kashmir.

As far as PDP’s courtship with separatist elements is concerned, there is nothing new if we go through the history of Jammu and Kashmir. To quote from “Kashmir: The Storm-Centre of the World” by former President of Bharatiya Jan Sangh, Prof Balraj Madhok: “The communal violence of 1986 in Southern Kashmir in which scores of Hindu temples were destroyed and thousands of Hindus of Anantnag district were rendered homeless cooked his goose. It was alleged that Mufti Mohammed Sayeed, the President of Congress (I) who coveted the Chief Ministership and was as unscrupulous as G.M. Shah had a hand in organising that communal carnage. It gave Hindus of Kashmir a foretaste of what was in store for them.” [Emphasis added]

Again in 1989, when Mufti Sayeed was sworn in as Union Minister of Home Affairs just five days ago, his daughter allegedly was kidnapped and the nation saved her life by releasing five notorious terrorists which later resulted in the flaring up of militancy in the state. Suspicious circumstances surrounding the incident are too well known to be repeated here.

Even if one doesn’t know the history of PDP and Mufti, even a cursory reading of PDP manifesto will make things amply clear. You will find ideas like “Self-rule”, “Shared sovereignty,” and “open boundaries” with Pakistan and allowing Pakistan’s currency to be used in Jammu and Kashmir. All these are available in public domain and even a politically naïve person can understand the brand of politics Mufti Mohammed Sayed espouses. In effective terms, the PDP manifesto chalks out a plan for strengthening Article 370 and the dilution of accession of Jammu and Kashmir with India. This is the exact opposite of the BJP’s nationalist ideology and manifesto with regard to the revocation of Article 370 as espoused since the days of Dr. Shyama Prasad Mukherjee. It would also be worth noting that the PDP’s manifesto is very similar to General Musharraf’s proposals to solve the Kashmir issue. Therefore, it is not difficult to guess for whose benefit these will play out in practice.

In view of all the aforementioned facts which clearly underline the risks the nation faces because of an alliance with PDP, the power sharing deal between the two is plainly shocking. In spite of being an almost equal partner in terms of the number of seats, the BJP failed in getting any important ministry for itself and has allowed itself to become a sorry and mute watcher in matters of larger national and state interest.

The BJP failed to see the importance of getting strategic ministries like Home and Revenue which could have been instrumental in implementing its important agenda points like curbing separatists and the rehabilitation of Kashmiri Pandits. For instance, had the Home ministry been with the BJP it would have become near impossible for Syed Ali Shah Gilani and Masrat Alam to hold a pro-Pakistan rally in the heart of Srinagar. The BJP would have got the effective sway over the issues like AFSPA review, defence lands, rehabilitation of Kashmiri Pandits and refugees and prosecution of separatists and terrorists. This was an important but a simple way of managing political risk while forming government with a party like PDP which has a well-known soft corner for separatists and terrorists.

To make matters worse, the BJP-led Union Government reopened secretary level talks with Pakistan, taking a U-turn on its much appreciated tough stand that terror and talks can’t go together amid continuous ceasefire violations by Pakistan and attacks on our Army. So, while the BJP diluted its stand at every stage, the PDP got all the key ministries and has stuck to almost all its key agenda points. And what PDP ceded on paper, it will try to obtain at each step using the nuisance value of separatist groups like Hurriyat.

While the CMP does contain certain salient points about issues like rehabilitation of Kashmiri Pandits, the PDP has devised ways to evade their implementation through a backdoor understanding with Hurriyat. This became evident this month when Union Home Minister Rajnath Singh reportedly pushed for a separate township for Kashmiri Pandits during his meeting with CM Mufti. While the PDP publicly committed to such a township, people like Yasin Malik sprang into action with their stone pelting gangs, and the very next day, Chief Minister Mufti backtracked on the issue. Amazingly, both Yasin Malik and CM Mufti said that such a township will be based on the Israeli model and “we will not let that happen to save the ‘composite culture’ of the State”!

Proof of the nefarious working of the Mufti government is also evident from the pro-Pak rally in Srinagar. It was well-known to the State government that Syed Ali Shah Gilani was returning from New Delhi to the Valley after three months. It is impossible to believe that the state government was unaware of the plans of Masrat Alam and his supporters to organize a rally in the reception of Geelani. And even a layman can guess that pro-Pakistan slogans would be raised in that rally. Yet, the Mufti government did not move its little finger to stop the rally despite fully knowing the fact that Prime Minister Modi was on a foreign tour and a pro-Pakistan rally in Srinagar might prove to be a major embarrassment for him.

Repercussions of Mufti’s antics are unlikely to bring any sweet fruits for the BJP or for the country. No matter how hard one shall try to reconcile with a secessionist outfit like Hurriyat, it has in the past, and it will in the future, continue to play to the tunes of its masters in Rawalpindi. Talking of providing a “healing touch” to people like Yasin Malik who have shared stage with Hafiz Saeed is bizarre. Furthermore, the release of separatists and terrorists may lead to another flare up in the Valley and discontent in Jammu. The recent showdowns of Hurriyat have serious implications for the Centre’s larger efforts to stabilise the State. A weaker Pakistan and waning Pak-sponsored insurgency in the State provides an ideal opportunity for the Modi government to turn the tide of history but if the PDP is allowed to have its way, India may miss that opportunity once again.

The effect of latest political developments in Jammu and Kashmir  requires an objective analysis. The Mufti government has started to allow separatist gatherings on which the previous government had placed a de facto embargo after the 2010 stone pelting incidents. The hardline separatist leaders like Syed Ali Shah Gilani, Yasin Malik and Masrat Alam have been on the forefront of these “protests.” This may push the so called “moderate” faction of the Hurriyat towards taking a hard line on various issues. With the likes of Masrat Alam chanting pro-Pakistan and pro-Hafiz Saeed slogans in Srinagar, Pakistan has got a reason to smile without any effort.

Even Hafiz Saeed is going to benefit inside Pakistan in terms of popularity by showcasing his “influence” in the Valley to his support base. Allowing separatist rallies like these may start a new wave of radicalisation among Kashmiri teenagers who took birth in an era of waning militancy and a failing Pakistan. In past, such separatists gatherings have invariably led to triggering of a series of unfortunate events in the Valley.

These developments are also to be seen in a larger national context. The soft policies towards the breaking India forces and pictures of Pakistani flags being waved in Srinagar will have a nationwide negative effect on the image of the Modi government. The BJP needs to craft a smart policy for dealing with PDP at the State level. So far the BJP has been caught napping on every occasion and scrambled at the eleventh hour to control the damage done by shrewd PDP. The State leadership of the BJP has so far proved to be totally ineffective in dealing with Mufti’s manoeuvring and every time the Central leadership had to put its foot down to control the situation from going out of hand.

If they want to bring development to the region, the BJP will have to ensure a crackdown on a handful of anti-national elements who’ve held the State to ransom for their vested interests.Only time will tell whether BJP will be able to do it. Currently what we can deduce from the happenings is that Mufti is igniting dangerous fires and if the BJP does not put its act together soon, it will completely lose the plot in Jammu and Kashmir.

This was jointly authored by Urvi Dave and Diya Soti. Divya is a Lawyer and National Security Analyst and can be followed on Twitter @DivyaSoti.

The author is a healthcare management professional and a keen observer of Indian Politics and Foreign Policy.

Is Farooq now down with Dementia?