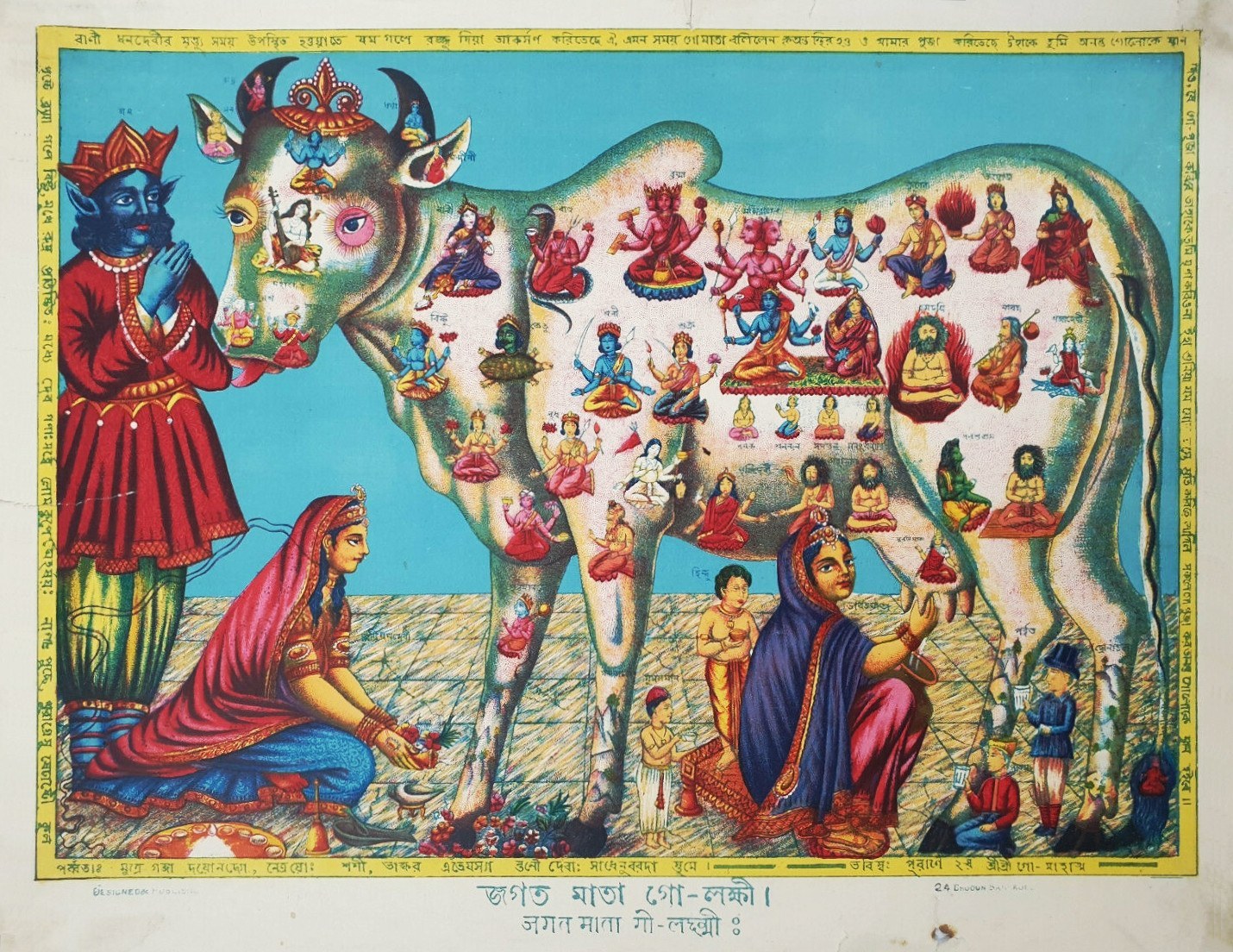 India that is Bharat by J. Sai Deepak offers a comprehensive analysis of the status of Bharat in India, its colonization, civilization, and the influences on the new Indian Constitution. The author’s focus on Bharat from 1492 (the Age of Discovery) to 1919 (the Government of India Act passed by the British rulers) is detailed, thorough, and has various elements for readers to ponder upon. The book recommendations included are bonus material for those who want to learn more about colonization, its impact on indigenous cultures, and decoloniality.

Some words cannot be translated, especially the ones in Samskritam. We still do it, and this causes more harm than it profits us. I say ‘we’ because I’m no champion. I’ve been doing it and still translate words from my mother tongue (Telugu) to English and attempt to find the nearest fit.

What happens when Indic, non-Abrahamic words get translated into a language that belongs to another religion, that too an Abrahamic one? The core meaning and purpose does not just get diluted, it gets lost. The inherent relationship between the word, the person, and the ritual ends as nothing more than a bizarre/ weird/ ignorant act with little or no value.

The book — Sanskrit Non-Translatables  —  by Rajiv Malhotra and Satyanarayana Dasa Babaji enables us to understand this challenge in more detail.

However, the common point is how the Western/Christian world has been crushing and destroying indigenous cultures in the name of globalization. When people of religions that go by the ‘Book’ have come to dominate the world, how do cultures rooted in diverse traditions with oral storytelling win the battle?

The world is full of misappropriated festivals, co-opted rituals, and stolen celebrations where the ‘others’ tell the indigenous folk how to ‘correctly’ celebrate what’s an inherent part of their culture and DNA.

When native language use is restricted, banned, or shamed don’t the indigenous folk lose out on their heritage and past? Won’t their cultural, linguistic, faith and performance roots weaken and get uprooted? Yes, that is exactly what the colonizer wants. You don’t have to take my words for granted. The graves of indigenous children  being found in Canada should at least make us  rethink the effects and influence of ‘Western Civilization’.

This article about a school for indigenous kids is another tiny peek into the murky ocean of colonization many are afraid of investigating.

From Protestant Reformation to Anti-Brahmanism

There’s one vital point that has always confused me. Though I could guess (thanks to my exposure to readings on decoloniality), I still did not fully understand how ‘witch hunt’ became a prominent theme that put Hindus and Brahmins in a bad light, and how words like ‘indigenous’ and ‘tribes’ are now being used to drive a wedge between groups in countries previously colonized.

For example, Hinduism is indigenous culture. We Hindus are nature worshippers. We believe in magic, the paranormal, and the supernatural. We respect them. Yet, the concept of using magic (and witchcraft) for healing is shown in a bad light. And we are accused of mistreating tribes and indigenous people.  The very same tribes and indigenous people who are now being converted into the oppressive religion of the colonizers – Christianity.

I’d like to share something personal. An uncle with an interest in genealogy was curious and did some research — the focal point being our surname, Mantrala. The first question people ask is if we are from Mantralayam – a town in Kurnool District in Andhra Pradesh. While we’ve always been Telugu, our roots were traced to coastal Andhra and not the Rayalaseema region of Mantralayam.

My uncle traced it back to around the early and mid-17th century when our ancestors were healers (this would be the Vijayanagara and Jaypore kingdoms). The main point, however, is their occupation.

My ancestors were faith healers (or witch doctors) who used natural medicine and mantras to cure people. They specialized in snake bites and snake poison. Our family deity is Subramanya, also represented by two entwined snakes that resemble the DNA structure. Since they used ‘mantras’, they were called ‘the mantrala people’ by others, and it became our surname.

Now you see the reason for my confusion.

India that is Bharat connected them for me. Sai Deepak explains how the anti-Church Protestant Reformation movement was directly applied to Hinduism and Brahmins. While the Protestant Reformation was about making the Church accessible for all and taking the power away from the Catholic clergy, the same movement in India led to Brahmin hatred and then morphed into Hindu hatred.

When the Protestant Christian claims to be ‘secular’ and yet a devout Christian, the ‘secular’ Hindu became a pretzel who bent backward to accommodate the ‘secular’ Christian’s demand for freedom without asking for equal respect in return.

Tolerance Is Not Acceptance

Tolerating someone’s religion, faith, and culture is not the same as accepting and respecting them. The reason for emphasizing this is because the British rulers never accepted Hinduism as a genuine way of life.

If you look at the number of times the words like idol worshippers, heathens, barbarians, idolators, infidels, ignorant, backward, tribes, uncivilized, etc., are repeated in the excerpts along with Christianity, spreading light, civilizing the heathens, teaching them to live, one true religion, salvation only through Christianity, responsibility to civilize the natives… their aim is more than evident.

What’s (twistedly) funny is that this language is in use today, as we can see below from the pamphlet published by some residents of Minnesota opposed to the construction of a Hindu temple. This happened in September 2021, when a Minneapolis Church objected to the construction of a Hindu temple in the area. Then, there was an attack on a temple in Swindon, UK, where it was robbed for the fifth time (yes, fifth). 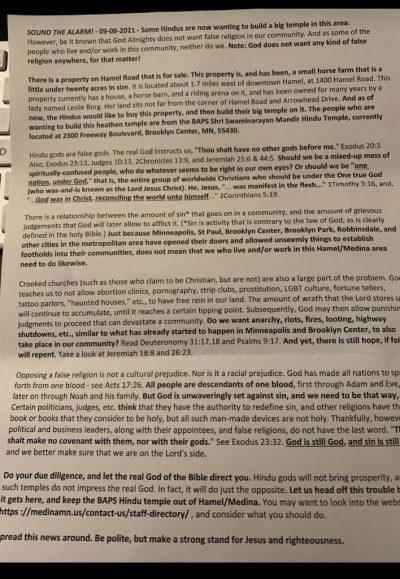 The Dismantling Global Hindutva Conference was yet another attack on indigenous faith by native elites who hate their roots and non-indigenous people.

Why is the rest of the world a White Man’s burden? Why do they need to feel great to take responsibility for ‘civilizing us and spreading the light’?

Why is it that development is valid only when it adheres to the West’s idea of development? When ancient Bharat had such a treasure of knowledge (which is being shamelessly appropriated and uprooted), what is the need to align with someone else’s idea of progress?

A lot of Indian pseudo-intellectuals quote the famous African proverb, ‘until the lion learns to write, every story will glorify the hunter.’ They use it to show their solidarity with the so-called minorities who are always ‘oppressed’, even if they’re the marauders desecrating indigenous cultures.

Don’t think that the phenomenon is limited to non-Indians. We have the latest example of how hatred for the Hindu is deep-rooted in the country, the only land we consider our home. For those who aren’t aware, the Portuguese inquisition in Goa was one of the most brutal events where Hindus were tortured using various means to convert to Christianity and become the followers of the ‘true religion’.

The lady is mostly a fifth or sixth-generation Catholic whose ancestors were among the ones who were raped, tortured, and murdered by the Portuguese missionaries. The way to be spared of such treatment was to embrace Christ as the only God. For someone to show gratitude for putting her ancestors through Hell when alive (to avoid Hell after death) and thank them for paving the way to spread ‘love, light, and peace’, well… it’s beyond one’s comprehension.

Nature and Indigenous Cultures (Yes, we are nature worshippers)

Indigenous cultures from around the world have their roots in nature. Nature isn’t meant for exploitation and entertainment. Nature is an inherent part of our lives. It is the essence of our existence. Even though we have had colonial education, some of us managed to retain the very core of our culture, thanks to our parents, grandparents, and ancestors.

This is the exact reason why we find placard warriors funny when they yell and screech about the environment. It’s ironic that the ‘wokes’ idolize these people and abuse those who have followed simple living and plant-based diet for centuries.

Cow-hugging is becoming a new way to reduce stress and to relax in some Western countries. It’s a trend, you see. But Hindus are cow worshippers. The cow is our mother. We don’t ‘pay money’ to hug a cow and enjoy a beef burger for lunch.

When we talk of protecting the cows, people use colorful terms that paint us as militants and even terrorists – we are ‘cow vigilantes.’ Then they feel so stressed about it that they decide to hug a cow for an hour because it’s promoted in Western countries.

But… if you can look at the indigenous cultures without the colonized lens, you’ll see how the cultures promote a happy way of life interwoven with nature.

Too Many Excerpts in the Book?

India that is Bharat is a heavy read. It’s full of interesting and informative material, including excerpts from transcriptions and exchanges between various British rulers when India was under their rule. One might ask, “Why add so many excerpts? Isn’t it enough to paraphrase and give the gist?”

The answer is no. The excerpts are proof, evidence of what Sai Deepak explores in the book. He’s a lawyer, and naturally, he knows why all of it had to be re-presented in the book. When the ‘intellectual elite’ thinks there can be only one version of history, and it should be the one they’ve approved, proof is what is needed… in abundance.

India that is Bharat is a way to understand ‘Decoloniality’ and embark on your own research journey. It’s a part of the long process that requires dedication, understanding, and a new perspective.

As I write this, a new group, calling itself the ‘South Asia Solidarity Initiative’ has been actively whitewashing the recent attack on Bangladeshi Hindus. Despite clear proof that terror was unleashed based on manufactured outrage, the platform is busy pinning it on Brahmins. The colonialists were clever.  They have succeeded in pitting us against one another.

Srivalli Rekha has earned an MA in English Literature as well as an MBA. Nature is her greatest inspiration. Her poems and short stories have been published in numerous anthologies. Srivalli is a founding member of The Hive Publications and has three eBooks to her credit.