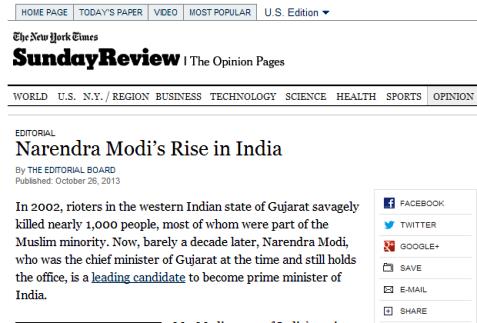 Assertion: In its editorial on 26 October 2013, the New York Times makes the following claim:

[Narendra Modi's] economic record in Gujarat is not entirely admirable, either. Muslims in Gujarat, for instance, are much more likely to be poor than Muslims in India as a whole…

As evidence of this claim, the NYT links to a Press Note issued by the Government of India's Planning Commission published in March 2012.

The aforementioned Press Note provides data on poverty estimates for the year 2009-2010 for the entire country. However, this Press Note is not the latest data on the subject. The New York Times should have based its assertion on the latest data, which the Planning Commission has released for 2011-12.

Surjit Bhalla has provided a detailed analysis of the latest figures showing the economic condition of Muslims in Gujarat. The following table (drawn from Mr. Bhalla's analysis) shows this analysis:

The NYT editorial also reports India's Muslim population as 138 million whereas the fact is that at about 14.6% of India's total population, Muslims make up for about 176 million people.

It is quite clear that the New York Times has failed to do due diligence on even simple, basic things like economic and population figures. The result is an editorial that violates the elementary journalistic ethic of verifying facts before publishing them as truth.

Why And How Fake News Is Created