My thoughts on Jallikattu 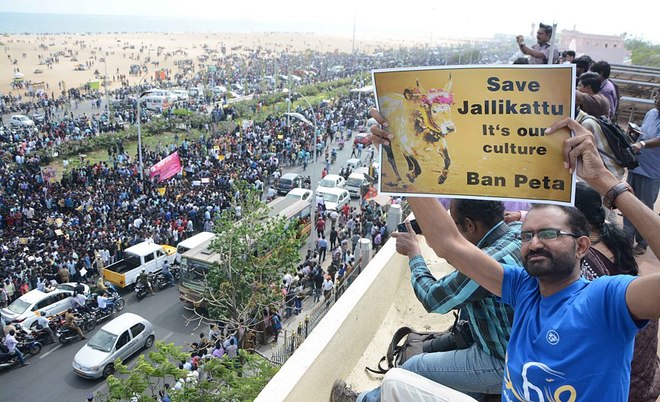 There has been a nationwide debate going on whether the age-old festival celebrated in southern states, Jallikattu, should be banned or not. The Supreme Court of India banned the organisation of Jallikattu in 2014 and since then there has been many petitions to the court to review the decision and let people celebrate the event. The Tamil Nadu government has sought Centre’s intervention regarding this. The central government is in the process of passing an ordinance to allow people to hold Jallikattu.

This link traces its history back to 5000 years ago when cow herders used to tame bulls that went out of control. Then later on it turned into a sport. The link above presents a case in favour of organising Jallikattu and why the festival, or event, is important for the survival of the indigenous species of cows. Of course there are contrary views and many believe that in the name of the sport animals are mistreated.

Even a few weeks ago, I was strongly opposing Jallikattu. According to the information I had, or rather the opinion that I had formed without much research, just to prove how strong some people are, they severely harass the animals and sometimes they are even gored to death (both animals and humans) .

Does it happen? Can’t say. But the general perception — and I have gotten this information from people I really trust — is that there might be some instances when the animals are cruelly treated but otherwise, it is a totally harmless sport considering everything that goes on all over the world and in different communities in the name of tradition and culture.

Is Jallikattu a blood sport?

There are many sports in the world that involve animals that can be easily termed as “blood sport” because in those sports sometimes animals die horrible deaths. There was a sport in Punjab in which hounds were let loose on rabbits. This bloodsport was rightfully banned. Hunting is banned in many regions although the decision to ban hunting is less ethical and more “practical”.

So, is Jallikattu a blood sport?

As far as I know, all in all it is not a blood sport. It does not involve killing or maiming a bull, traditionally. You prove your manliness not by killing the bull as it happens in Spanish bullfighting and animal fighting in other regions. You prove your manliness by overpowering the bull. In some cases, the one who can mount the bull and then stay on its back for a longer period than others, is the champion.

It’s like rodeo in America. In America rodeo is a famous sport. It has been reverentially featured in many movies. The activity even has a complete sporting event dedicated to it. Do you call it a blood sport? Not necessarily. Do the bulls or horses remain unharmed 100%? Not necessarily. Do people resort to cruel means to incite the animals as much as possible? Some do. Most don’t.

Then there are competitions on how well trained your dog is. Many people cruelly treat their dogs in order to make them perform different tricks.

The same happens with Jallikattu. Nasty people are everywhere. Cruelty is inherent in some people and they are going to be cruel in many aspects of life, including Jallikattu.

Untold cruelties are perpetrated on day-to-day basis in slaughterhouses. The biryani that you enjoyed a few days ago and even posted its photograph on Facebook, was a result of a cruelty. Some animal was slaughtered. When they slaughter animals they’re not worried about causing the animal minimum or maximum pain. For them, the animal is just an object, a piece of meat.

Have you seen those shacks by the roadside crammed with chickens? So many birds are crammed into these shacks that they are crushed while alive. They start pecking each other and even gorge the eyes of their fellow occupants. And this is something that you may come across every day going to office or college. This is not some sort of cruelty that is happening out of your sight.

These people are totally desensitised. Animals are slaughtered in front of each other. Sometimes individual body parts are chopped off while the animal is still alive and screaming.

What about sacrificing animals in the name of religion? Millions of goats and cows are sacrificed by Muslims. In many temples goats, chickens and bulls are sacrificed. On Thanksgiving millions of turkeys are consumed in the name of tradition. There is a fish recipe that requires a live fish to be shallow fried. There is a Chinese recipe — although I’m not sure if this is factually correct or not — requires dogs to be boiled alive.

Talking about fish — they’re not even considered meat by many. In fact, if you want to see animal cruelty, observe how fish are treated. Sometimes they start peeling them while they are writhing. They are cut to pieces while the individual body parts are still shaking. Fishing is considered to be a therapeutic, meditative activity by many. Sticking the hook in the throat of a fish is a romantic activity for many. Small kids are taught by their fathers how to fish. Books have been written on this. Movies have been made.

Have you ever seen how horses, bulls, camels and donkeys are treated in their day-to-day usage? I once saw a bullock cart owner repeatedly hitting the genitals of his oxen to make them run faster.

What I’m trying to say is, as long as animals are a part of our lives, cruelty to animals, whether we like it or not, is going to exist. Maybe, after a few centuries, when we no longer have to depend on animals for food and labour, or when animals no longer exist as abundantly as they still do, they will have the same rights to life as the privileged among us have. But until then, animal cruelty is going to exist, whether we like it or not.

Blatant hypocrisy of the rights activists

Are some animals treated cruelly during festivals? Unfortunately, yes, they are. But these are exceptions, not rules. Do some birds get injured during kite flying? Yes, but again, exceptions, not a rule. Recently a kid’s throat was slit by Chinese manja during kite flying, so yes, freak accidents happen. Do crackers cause pollution? Yes, they do, but there are other activities that cause far more pollution than the crackers, and that too, year-round. Cattle breeding is more environmentally harmful than bursting crackers one day in a year. Millions of gallons of water is wasted in swimming pools and on golf courses but suddenly we have a problem when people sprinkle water on each other on Holi. Almost every animal under the sun is eaten as a delicacy, but suddenly, parading elephants during religious festivals, feeding snakes milk and using bulls in Jallikattu become paragons of cruelty.

Don’t you think this reeks of an inveterate bias? Even a conspiracy? Had these rights activists been raising voices against all instances of cruelty originating from every religion and every community, it would have made sense and it wouldn’t have seemed motivated. When was the last time you heard of animal rights activists coming on roads against Bakra-eid or even the mass consumption of turkeys on the Thanksgiving day? How many online petitions have you come across protesting against fishing? What about rodeo? Has any organisation ever tried to get it banned? What about beef eating? What about horses used for horse carts and bulls used for bullock carts and donkeys used by labourers? What about camels, bulls, horses and oxen used by farmers all over the world. What would sledge dogs? What about all those monkeys and rats used in laboratories? What about billions of frogs being dissected in the schools? On top of that, when many well-intentioned Hindus talk about cow protection, they are termed as communal. When you want to speak up for the bulls used in Jallikattu, you are an animal rights activist. When you want to stop cows from being slaughtered and want to protect them, you are communal. How crazy can it get?

I know, I may seem like digressing here, but what I mean to say is, why target a particular community always? And even if you want to target that community, why not make it a fair activity and speak up against every instance of cruelty from every religion? You suddenly turn a deaf ear when goats bleat in pain during a certain festival, and then you suddenly become all vocal when you see some bulls being mistreated during Jallikattu or snakes being fed milk. Play fair.

Having said that, ideally, cruelty should have no place in the civilised world, but the definition of cruelty seems to be changing based on religion, community, culture and tradition. Cutting fish to pieces while it is alive or sticking a hook in its throat is acceptable and even romanticised while a game that involves overpowering a bull is considered cruel. Just because a bull is bigger than a fish? Somehow, no matter how hard I try, it doesn’t seem right.

Personally I don’t subscribe to the attitude of “since they do that we will do this” because I like forming my own opinions so I’m not saying we should be okay with animal cruelty because in many cultures animal cruelty is not just a part of life, but also a revered, religious activity. But I certainly believe that we should take a holistic, inclusive and uniform approach. Let’s be against animal cruelty wherever it exists.

In the meantime, instead of trying to ban traditional sports that are not by nature cruel to animals but certainly have some scope for animals being treated cruelly, we should make it difficult for people to treat animals cruelly. Communities should be involved and people should be sensitised. Instead of making it into a “them versus us” campaign, let’s establish a people to people contact and try to understand why certain practices exist.

For the time being, I think Jallikattu should be allowed and measures should be taken so that animals are not treated cruelly.