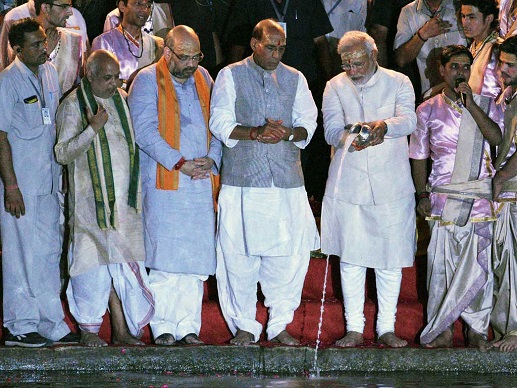 Today, on 7 November 2014, the people of Jayapur village in Varanasi celebrated when it was announced that Prime Minister Narendra Modi would adopt and develop Jayapura in his constituency Varanasi under Saansad Adarsh Gram Yojana (SAGY) scheme.
According to this Times of India report, Jayapur residents were also at the forefront of ensuring Narendra Modi’s magnificent victory in the Lok Sabha elections of 2014.  An interesting fact mentioned in the report is about the historical significance of the village.
Quoting Prof KK Mishra, the Head of BHU’s Political Science department, the report mentions:
.. in 17th century, when Mughal emperor Aurangzeb was said to be on temple-demolition spree, his soldiers caught attention of an old temple of Lord Hanuman in the village. It was a unique as the main deity Lord Hanuman was black in colour. It is for this reason that the temple is still known as “Kale Hanuman ka temple.However, not ready to give up, the villagers not only put up a brave fight before the Mughal soldiers, they even forced them to beat the retreat……
This historical incident again highlights the significance Varanasi occupies in the long, chequered, and illustrious history of India. And since it speaks of the Mughal emperor Aurangzeb’s temple-demolition spree, it is inevitable that the full scale destruction of the famed Kashi Vishwanath Temple gets a mention.
Interestingly, this bitter historical tale that took place during the bigoted and cruel rule of Aurangzeb was brought to the nation’s attention in a strange way in May 2014 by eminent secular journalist Sagarika Ghose in this tweet:

To my surprise, I actually agree with Ms. Ghose’s stand, and hope PM Modi will do the honors in this visit. After all, if the Kashi Vishwanath Temple speaks of Varanasi’s historical glory, the Gyanvapi mosque equally speaks of its horrors and suffering during tyrannical times.
I hope Sagarika Ghose, a history graduate of St. Stephens knows the history of this mosque. But since a lot of her writings prove she lacks (or overlooks?) even the basic knowledge of Indian history, let us see what the chronicles say about this ‘historical’ structure:
This mosque was built by Emperor Aurangzeb in 1669 CE, after destroying the original Kashi Vishwanath temple located on the site. The mosque is named after Gyanvapi that is ‘well of knowledge’ which is a well situated between the present-day Kashi temple (constructed in 1780, under the direction of Ahilyabai Holkar , Queen of the Maratha ruled Malwa kingdom,) and the mosque.
The well is believed by many Hindus to be the location where the sacred Shiva linga of the original temple was hidden, before it was razed under the directions of Aurangzeb.
Because there is a lot of talk about the correcting Indian history, it is imperative PM Modi visits this reminder of medieval injustice that was heaped upon Varanasi.
[pullquote]If the Kashi Vishwanath Temple speaks of Varanasi’s historical glory, the Gyanvapi mosque equally speaks of its horrors and suffering during tyrannical times. [/pullquote]
But many a historian of India with secular credentials have claimed that there is no credible evidence to prove the grand mosque stands on the ruins of a Hindu temple, and the existence of the ‘well’ is just a concurrence or part of the local folklore. When faced with evidence like rubble of old temples found near the mosque, these historians narrate this peculiar story:
The story regarding demolition of Vishvanath temple is that while Aurangzeb was passing near Varanasi on his way to Bengal, the Hindu Rajas in his retinue requested that if the halt was made for a day, their Ranis may go to Varanasi, have a dip in the Ganges and pay their homage to Lord Vishwanath. Aurangzeb readily agreed. Army pickets were posted on the five mile route to Varanasi. The Ranis made a journey on the Palkis. They took their dip in the Ganges and went to the Vishwanath temple to pay their homage. After offering Puja all the Ranis returned except one, the Maharani of Kutch.
A thorough search was made of the temple precincts but the Rani was to be found nowhere. When Aurangzeb came to know of it, he was very much enraged. He sent his senior officers to search for the Rani. Ultimately, they found that the statue of Ganesh which was fixed in the wall was a moveable one. When the statue was moved, they saw a flight of stairs that led to the basement. To their horror, they found the missing Rani dishonoured and crying, deprived of all her ornaments. The basement was just beneath Lord Jagannath’s seat. The Rajas expressed their vociferous protests. As the crime was heinous, the Rajas demanded exemplary action. Aurangzeb ordered that as the sacred precincts have been despoiled, Lord Vishvanath may be moved to some other place, the temple be razed to the ground and the Mahant be arrested and punished.
This strange theory was launched by B.N. Pande, the former Governor of Orissa, his source being Dr. Pattabhi Sitaramayya’s famous book, The Feathers and the Stones.

The source in the book is best described in the words of Dr. Koenraad Elst : an unnamed mullah friend of an unnamed acquaintance of Sitaram ayya’s knew of a manuscript, the details of which he took with him in his grave.

But since it absolves Aurangzeb of being a rabid iconoclast, this source is valid and rational in the eyes of our eminent historians.
The poor communalists though, still prefer doing things the hard way: poring through official records and primary sources, cross-verifying differing versions, and so on.
So, let’s read what the official court chronicle, Maasiri Alamgiri, (Alamgir was Aurangzeb’s official name) as quoted in Dr. Bhim Rao Ambedkar’s ‘Thoughts on Paksitan’ says about the demolition of the Kashi Vishwanath temple:
” In April, A. D. 1669, Aurangzeb learned that in the provinces of Thatta, Multan and Benares, but especially in the latter, foolish Brahmins were in the habit of expounding frivolous books in their schools, and that learners, Muslims as well as Hindus, went there from long distances…. The ‘ Director of the Faith ‘ consequently issued orders to all the governors of provinces to destroy with a willing hand the schools and temples of the infidels; and they were enjoined to put an entire stop to the teaching and practising of idolatrous worship.. …Later it was reported to his religious Majesty that the Government officers had destroyed the temple of Bishnath at Benares. “
Here is the original Farsi document:

Yet, many historians and sociologists have chosen to downplay Aurangzeb’s iconoclasm based on peculiar, incomplete accounts, and have added their own fancies and distortions to it. On being proven wrong, most of them claim: why rake the past, and create tensions between Muslims and Hindus at the present age?
The answer is plain and simple: no nation can move forward unless they acknowledge the mistakes of the past and ensure that they do not recur. Hence Muslim leaders and scholars can and must acknowledge the atrocities of medieval Muslim rule which had nothing to do with them.
In the present scenario one can confidently claim that the shadow of Aurangazeb is looming over the globe as we see at the atrocities committed worldwide by the likes of Al-Qaeda, Taliban, Boko Haram and most recently ISIS. Aurangzeb believed orthodox Sunni Islam was the purest form of the Only True Faith, and he went on to impose it with ruthless efficiency on all his subjects, even on those who followed a more deviant version of Islam such as his brother Dara Shikoh as well as the followers of Bulleh Shah. Al-Qaeda and company have indeed done more than enough to make him proud.
It is for this reason that we need to remember Aurangzeb as a bitter, horrible chapter of our national history. And his creation the Gyanvapi mosque like the German WWII memorials ‘immortalizes our own shame.’

At the same time, it is essential for us to commemorate and celebrate the historic moments of resistance and victory against tyranny, bigotry and oppression during the prolonged medieval Muslim rule. Indeed, PM Narendra Modi is doing exactly this by adopting Jayapura under the Saansad Adarsh Gram Yojana (SAGY)—in many ways, this simple act conveys his deep and abiding patriotism and the veneration he has for India and its historical heroes.

[pullquote]In the present scenario one can confidently claim that the shadow of Aurangazeb is looming over the globe as we see at the atrocities committed worldwide by the likes of Al-Qaeda, Taliban, Boko Haram and most recently ISIS.[/pullquote]
The villagers of Jayapura are indeed the cultural inheritors of their ancestors who upheld freedom and cultural pride by resisting the formidable Aurangzeb.
When Modi spoke of ‘national rejuvenation,’ his critics scoffed at it as ‘mere rhetoric.’ However, now, with the respect he has accorded to the true architect of Post-Independent India, Sardar Vallabhai Patel and the pride he has now conferred upon the village of Jayapura, Narendra Modi has proved that he just does not talk the talk but walks the walk as well.