Opposing the Left is Not “Right”- Part I: A letter to students 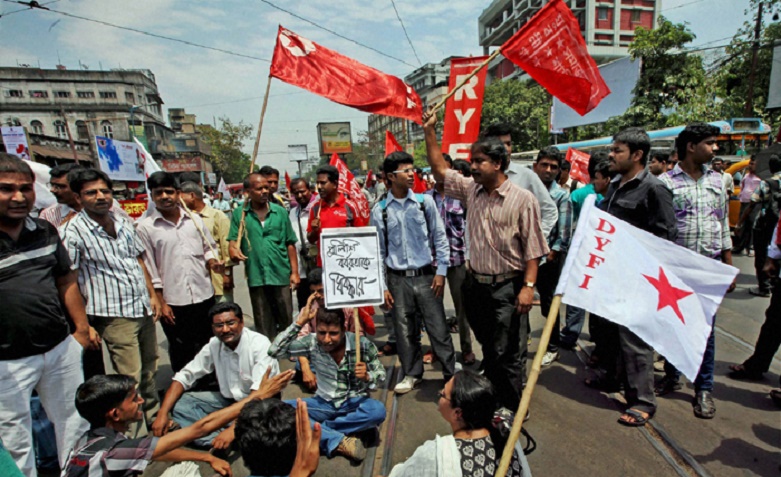 It all started with the JNU row. Being an academic in the United States who teaches and researches in the areas of spiritual philosophy of Sri Aurobindo, Contemporary and Traditional Vedanta, Theravada and Mahayana Buddhism, Sufism of the Indian subcontinent, Comparative Mysticism, Transpersonal Psychology, Cultural and Cross-cultural Psychology, Indian Psychology, Philosophy of Science and Epistemology and Postcolonial Thought, I wrote a post for the students of India to critically examine the ideological substratum of left-wing thought so that they could include in their thinking and practice the projected idealism of Indian left as they transcended it into something truly spiritual, a field which largely comes from the classical Indian traditions—Hinduism, Buddhism, and Jainism—and Sufism.

Before I proceed further, here is a complete reproduction of the post, posted on 16 February:

The university campuses in India are on a boil, and it is this socio-political situation, which inspires me or compels me to write to you. My appeal to you is that instead of having a knee-jerk reaction either in favor or against this post, you would take some time to sit back and reflect on the contents. The job of an academic is always to make his/her students think critically, and it from this perspective that I write to you.

I am sure that some of you when learning about the mythologies of India must have heard that an asura (a demon) sometimes comes in the garb of a beautiful nymph, an enchantingly beautiful woman, to mislead and to disrupt an ongoing spiritual experiment for the larger good of humanity.

What I am going to say next may come as a little shock to you: the left wing thinking in India is basically that asura which will derail your commitment and continued endeavor to make India strong, beautiful, and powerful. But what is the facade that is takes? Inspired from the Marxist thought, it presents in front of you a utopia, where there is equality, respect, distribution of resources, no difference between the haves and the have-nots, etc., etc. But at the core of it, it has violence embedded in it.

It attempts to accomplish this through a violent overthrow of the bourgeois by the proletariat, of the elite by the subaltern. It is the commitment to create a beautiful world, which is the facade which it puts out in front of the idealistic youth but at its core, it turns them into spiteful, hateful, vengeful, vindictive, and malicious individuals. It continually creates, either truly or fictitiously, a powerful elite or the other against whom a violent battle has to be raged.

So what is it that you need to do at this point in time? You need to separate the wheat from the chaff—beautiful from the ugly, idealism from violence, commitment to create a beautiful world from the means that the left wing thinking, either explicitly or implicitly, proposes. You would need to find other ways in which you can keep your idealism intact and remain committed to creating a beautiful world. What those ways can be will be the content of a different post.

I am least surprised today that there is a possible nexus in India between the left-wing academics and students in India and the jihadists. And the reason why I am not surprised is because the ideologies of both these parties have violence at the core. You must have heard the saying, “birds of the same feather flock together.” The latter perpetrates violence explicitly whereas the former subtly and surreptitiously.

If you want to save your country from fragmentation, you would need to critically examine the left-wing thought. And it is important that you do it because of the “maya” that it puts out in front of you that in your idealism you get mislead—in fact this thinking attracts some of the best minds in social sciences. So extract the idealism of the left-wing thinking and junk it for systems that are different and truly spiritual in nature. As I conclude, please keep the following in mind: A critique of left does not put me in the category of right. I do not belong to the right either. By putting me in the right, the whole purpose of this post would get lost.

Before my detractors begin insinuating obscurantism and superstition, I want to underline that that I took the descriptions of asuras from puranas, and I do not consider the puranas myths or mythologies as described in the western literature. The current western framework operates in the paradigm of positivism and logical positivism (which states that only that is real and worth investigating is which can be perceived by five senses) and rationalism (which privileges mind, reason, and logic as the ultimate instruments for knowledge pursuit), and it cannot really do any justice to the investigation of reality or superstition of these matters.

This is primarily because the epistemology (theory of knowledge) and methodology, which has given birth to puranic literature categorically holds that there is a profound realm of knowledge, which cannot be accessed through five senses, emotions, or mind. This realm of knowledge is however scientific, though not in the positivistic sense, and it can be accessed through subtle senses that are behind our gross senses. This realm of knowledge is verifiable and reproducible, and that is why yogis across the ages in India have underlined the existence and reality of these subtle and invisible realms. These realms that are behind the manifest can be accessed and known by anyone who engages in spiritual and yogic practices, which includes the practices of various “paramparas” of Vedanta, Buddhism, Jainism, and Sufism.

The Asuric or negative hostile forces not only have an occult existence but also have certain characteristics. One of those characteristics is deception, which the asura produces through a façade in complete contrast to what it is in actual existence. These forces are masters at creating illusions, which deceives—and that is the reason they are called “mayavi.” These are illusions of profound beauty but actually are mirages hiding violence, disharmony, and fragmentation. This is a larger topic, and the paucity of space here precludes me from going into further details.

The left thought in India actually represents this force. The façade of their teaching is social transformation (which is extremely important for India given the many centers of oppression that have come about because of the brutal history that it has faced) but at the core of the ideology is violence.

There is always a real or fabricated other against which the left has to wage an ideological war—and this has its roots in the thoughts of Marx and Lenin, which for right or wrong reasons (a commentary on the righteousness or not of their battle cry is not the topic of discussion; therefore I will request readers not to draw me into that debate here) gave a call to the proletariat to fight and exterminate the bourgeois. I am not saying that the left intellectuals are stuck in Marxism but whatever and whichever ideology or philosophy they have acquired whether it is from post-colonialism or subaltern studies or from Frankfurt school of Adorno or Mercuse, there is always this implicit and explicit violence. It is in the façade of social transformation that this violence is embedded.

My appeal to the students through the post was inspired from the profound teachings of Sri Aurobindo to help them transcend and integrate the façade of the leftist thought—which I must underline has wonderful and necessary considerations and critique for social transformation—to something more profound and spiritual, where the utopia of the left is preserved but at the same time, its exploration happens in the spiritual cosmology of India: the same cosmology that the Indian left has taken extra pains to kill through various ways (this again is a lengthy topic of exploration which will need many books to cover; the paucity of space makes me stop here).

I had not taken a dualistic instance against left thought. I had not rejected it in entirety. It was not that I did not acknowledge some of their necessary and relevant critiques for social transformation. I had not asked their literature to be not read or burned. I had not asked for JNU to be shut down. I had not said the Indian left needed to be silenced. On the contrary, what I said was that it was necessary for the students to separate utopia and beauty from implicit and explicit violence, and look for literature in which their aspiration and desire for social transformation could be assimilated and transfigured. My take on the left thought was beyond the binaries of pro and against, celebrating it or silencing it, etc, etc.

To recap, I closed by suggesting the following:

Next Up: A sequel regarding the Mahishasura controversy.