Opposing the Left is Not “Right”-Part II: More to Mahishasura 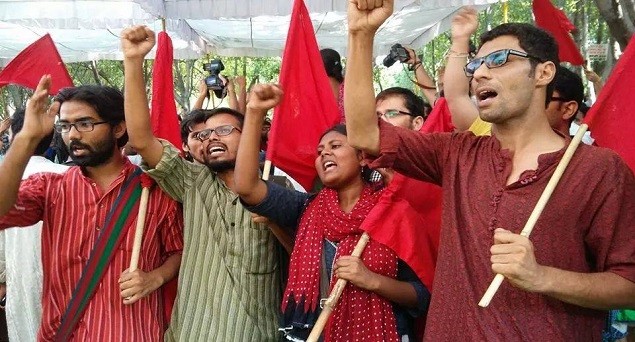 A debate ensued, which led me to write another post on February 19: This time it was it was for all and sundry. I am reproducing it in entirety for you to read:

After I posted my earlier piece as call [to] the students comparing left-wing thinking to the asuras, which I wrote not from the position of a right-wing thinker but from the positional of a critical thinker and an academic, I was not aware that some of the left-wing ideologues in JNU have actually been worshipping the demon or the asura “Mahisasur” on campus.

It actually lends a lot of credibility to my thesis. Whereas I do not question their right to worship whoever or whatever in accordance with the constitution of India, I do want to take the opportunity of raising awareness among my fellow Indians with regards to the deeper occult significance of this.

Secondly, as I reflect further on some of the slogans that were shouted on JNU campus on February 9, my thesis gets substantiated even more. So let us look at some of the February-9-JNU-campus slogans: “Bharat Tere Tukde Honge,” meaning India, you will be fragmented; “Ek Afzal maroge, ghar ghar afzal paida honge” meaning if you kill one Afzal, there will be Afzal from every home.” These slogans are not merely against a State, which in their opinion is oppressive or just a celebration of a jihadist. It is much more sinister and evil than that.

Scholars who are engaged in academically understanding the spiritual heritage of India will know and understand that in the cosmic scheme of things, the demoniac, hostile, and evil forces are forces representing fragmentation, disharmony, and rupture. That is why there is a call to fragment India. What is even more interesting is that they are using the term Bharat for India—a term which both the Jihadists and leftists are not known to use. The reason that they are using it in this context is because they are targeting Bharat Mata, which again from the account of many spiritual figures primarily Sri Aurobindo, is a spiritual figure representing forces of unity, harmony, and spirituality.

Now let us come to understanding the occult behind the second slogan. For those of you, who have read about the demon Raktabeeja, you would know that this demon multiplied as many times as its blood drops fell on earth. These slogan shouting leftists and jihadists combined are invoking the hostile, negative, and demonic forces behind the asura (demon) Raktabeeja when they sloganeered in favor of Afzal.

The significance of all this is much deeper, which unfortunately will get lost in the freedom of expression vs. nationalism debate, not that the debate is not necessary. But look at the debate itself. It began with most of the English media anchors like Barkha Dutt (from NDTV) and Zaka Zacob (from CNN IBN) taking the side of freedom of expression—only Arnab Goswami from Times Now TV took a different stance, when he actually nailed the JNU students who were participating in the debate.

Due to the public outrage at the anti-India slogans, backed by the arguments of many that the Indian constitution does not guarantee an absolute freedom of expression, some of these media people backed off. But then they took off on a different track: linking this public outrage siding with Nationalism with the rise of Fascism.

Now before I proceed further, let me make an important distinction: there will be some in the Indian left-wing who will be ignorant and some will be outright evil. The ones who have been explicitly supporting the bloody ideologies of Naxalism, Maoism, and Jihadism are outright evil or asuric. Others are ignorant, whose vision does not go beyond the self-righteous goals of left thinking and an extreme hatred for anything spiritual, which comes largely from what is now called the Hindu thought.

I give it to them that they are bleeding-heart “intellectuals” and good-hearted people but they have not gone beyond the confines of left thought, and have most certainly not extensively explored the Indian spiritual traditions by having spent time to know the rationale of why the Indian spiritual traditions proposed what they did—the disagreement with it is not the issue here; what is at stake is an academic and intellectual exploration and understanding. The above issue, which I have just mentioned is a huge topic, worth covering in many books. Therefore I will stop here and come back to the earlier point that I was making.

Asura or the negative hostile forces operates through both: ignorance and evil. And that is why you will almost always find left-wing supporting the causes of these undivine forces engaged in the process of fragmentation and division—it almost always happens in the name of ideals. And it is behind these high ideals that it avoids the scrutiny of an incisive intellect.

Therefore what I am suggesting here:

1. The State at this point in time should act tough and go after these outright evil students, activists, academics, and intellectuals who have any connection with the violent groups—whether it is Naxals, Maoists, or Jihadists.

For far too long, the left-wing intellectuals have enjoyed the patronage of State for promoting the Nehruvian-Marxian-left ideology and clamping down on anyone who differs from them by right away putting them in the extreme Hindu camp. Then they link the budding intellectuals with Nero or fascists or Gujrat violence, and that is where the story ends. There is always the support of most English media, and they happily and gleefully go back home celebrating their unknown fascism, having killed dissent and difference of opinion. The classical Indian traditions have a long history of very sophisticated intellectual arguments, which have been almost totally killed by the left-wing fascists in India. This is what the left-wing does to dissent and difference of opinion coming from the classical Indian traditions, necessarily in the same order: Hindu, Brahmanical, RSS-BJP, Gandhi Killers, Gujarat violence, Nero, fascists, Nazis.

So, now it will lie low for some time. It will look for some scuffle here and there so that it can link it up with extremism and fascism. In fact, it has already begun demonizing your nationalism by linking it with fascism and Nazism. This “mayavi” asura, operating through evil and ignorance, will demonize everything spiritual that you may be wanting to do.

The demon is hiding in the left-wing thinking, working through outright evil and fooling the ignorant. And because there are many nice hearted ignorant people in the grip and clutch of the asura, the best approach for the governance should be to create academic institutions of eminence where the nice-hearted, well-meaning left intellectuals can be engaged through an academic spirit of inquiry and shown a different light where they can transcend and integrate their idealism and desire to create a beautiful world for something larger and better.

I specifically favor nationalism when I make a call to the State to investigate and persecute these left ideologues, who have explicit connection with violent groups. On the other hand, I strongly tilt towards freedom of expression when I clearly state that the State should ensure that the good-hearted and good-spirited left intellectuals are not harmed in any which way and that it should ensure that their freedom of expression and academic freedom does not come under any cloud. I make it a point to emphasize that clamping down on JNU is not the solution.

On the contrary, the State should take measures to establish institutions of eminence where classical Indian spiritual traditions are taught. I am not in any way or form for reducing the plurality or diversity in ways of knowledge pursuit. On the contrary, I am all for promoting and proliferating it. I am certainly against is is the fascism of the Indian left, which begins to tarnish dissent always by linking it with extreme Hindu right. This is a dangerous trend in India, and it is important that the academics in India should know about and raise their voice against.

I do not understand if this is not liberal thinking, then what is!

[The two posts led to a vigorous debate between Prof. Kundan and a Facebook friend who is a mainstream journalist in India.  This will be the 3rd part of these series.]

The Uneasy Relationship of JNU and the Indian Nation-State