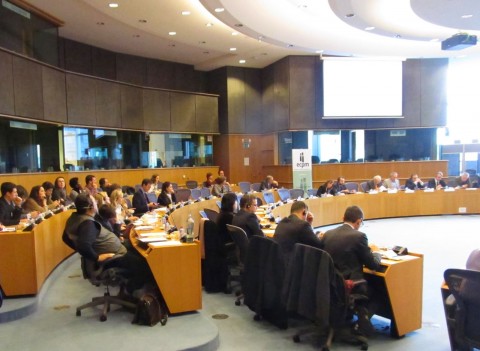 The first part of IndiaFacts’ series on the Joshua project mentioned the fact that several Evangelical organizations are backed and often funded by a certain section of politicians from the Western nations.

Given below are some of the notable Christian advocacy groups who have visible political associations:

1. The Konrad Adenauer Foundation (KAF): Based in Germany and related to the Christian Democratic movement. Named after the first Chancellor of the Federal Republic of West Germany. According to its website, KAF offers political education, grants scholarships to gifted individuals, researches the history of Christian Democracy, and supports and encourages European unification, and development-policy cooperation. This foundation has funded some notable British Members of Parliament to attend conferences and visits to various parts of the world on issues of religious freedom and has sponsored other officials to attend conferences of the Christian Democrats Union.

3.World Vision (WV): A Christian Charity, which funds members of parliament to attend Christian Democrat conferences. The website states its mission and funding arrangements as:

“World Vision is one of the world’s leading relief and development agencies. It is a Christian charity currently helping people in nearly 100 countries in their struggle against poverty, hunger and injustice, irrespective of their religious beliefs. World Vision receives the financial support of the UK Government, the European Union, charitable trusts,corporate supporters – in addition to almost 70,000 people who sponsor children in poor communities overseas.”

4.Christian Action for Research and Education (CARE): A Christian advocacy group based in the United Kingdom. It began in 1971 as the Nationwide Festival of Light, but was renamed in 1983. CARE also runs the ‘Leadership Programme’, an internship programme securing placements for graduates. Some work as researchers for British MPs, while others work in Christian NGOs.

The following is a list of notable British MPs who have been associated with these Evangelical associations:

1.       John Bercow (Conservative Party) – Parliamentary adviser to Christian Solidarity Worldwide until 1 November, 2005. Has made two visits to the Thai/Burmese Border paid for by CSW.

2.       Alistair Burt (Conservative Party) – He is known to have attended several meetings of Christian Democrats paid for by the Konrad Adenauer Foundation. The Christian Action Research and Education has provided staff to him in the past.

3.       Steve Webb (Liberal Democrats) – Some of his office staff had been provided by the Christian Action Research and Education.

4.    Andy Reed (Labour) – Some of his office staff had been provided by the Christian Action Research and Education.

5.       Jeffrey Donaldson (Democractic Unionist)- His political office was often managed by researchers from the Christian Action Research and Education.

6.       Caroline Spelmen (ConservativeParty)- Some of her  office staff had been provided by the Christian Action Research and Education.

The complete details on this issue can be accessed in this TII report.

To know more on the funding  of  Evangelical organizations in India  by American groups, read this IndiaFacts report.