Pope John Paul II: a criminal or a saint? 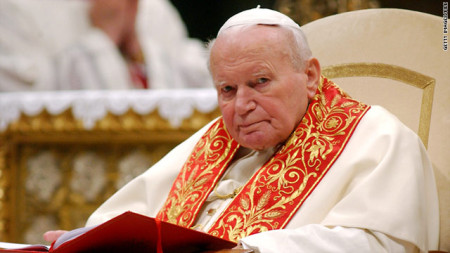 The Vatican has proclaimed Pope John Paul II a saint. A saint is required to have performed miracles. The French nun Marie Simon Pierre claims that she prayed to John Paul II three months after his death and was cured of Parkinson’s disease. A Costa Rican woman claims that she had been diagnosed with brain aneurysm and that medical doctors had given her less than a month to live. However, she allegedly prayed to the late pope and was miraculously cured. The Vatican has canonized John Paul II on the basis of these two alleged miracles.

The causes of Parkinson’s disease aren’t yet fully understood. The treatment varies from administering MAO-B and COMT inhibitors to a surgical method called Deep Brain Stimulation. Brain aneurysm is a bulging, weak area in the wall of the artery that supplies blood to the brain. There is rarely any symptom until the rupturing of aneurysm results in a stroke. Miracles do not cure Parkinson’s or brain aneurysm. One can reasonably conclude that the Vatican has induced the French nun and the Costa Rican woman into lying about miraculous healing.

Debilitating illnesses often make an individual desperate. Such an individual may be prone to believing claims of miraculous healing. However, nothing is morally more repugnant than exploiting the gullibility and desperation of such a person. The shameless charlatan Pope Francis is exploiting the gullibility of the desperate by fabricating claims about miraculous healing. Remember that popes rush to hospital even for a simple broken wrist. They do not pray to dead popes for miraculous cure. It seems that the alleged miraculous powers of John Paul II which are useless to fix a broken wrist are somehow capable of curing Parkinson’s disease and brain aneurysm.

The canonization of John Paul II is not merely an act of charlatanism but also one of giving an anti-Semitic moral criminal an image makeover.

Christianity is fundamentally an anti-Semitic ideology. Norman Beck shows that the New Testament alone has over 450 anti-Semitic verses. Christianity not only gave birth to anti-Semitism but also fueled it and brought to a climax in the Holocaust that resulted in the extermination of six million Jews. Elie Wiesel, 1986 Nobel Peace Prize winner, wrote on the Holocaust (Abrahamson, Irving (ed.): Against Silence, the Voice and Vision of Elie Wiesel, vol. 1, p. 33):

All the killers were Christians. The Nazi system was the consequence of a movement of ideas and followed a strict logic; it did not arise in a void but had its roots deep in a tradition that prophesied it, prepared for it, and brought it to maturity. That tradition was inseparable from the past of Christian, civilized Europe.

A moral person, upon becoming the pope, would’ve apologized for the anti-Semitic teachings of Christianity and repudiated those hateful biblical teachings. However, John Paul II showed no signs of remorse or moral decency. Instead, in 2000, he beatified the anti-Semitic monster, Pope Pius IX, who had declared that “by rejecting Christianity, Jews had become dogs and that there existed in Rome too many of those dogs, who are heard barking in the streets, and going around molesting people everywhere.” Pope Pius IX ran an inquisition to abduct a Jewish child, Edgardo Mortara, from his parents, and refused to return him (see Kertzer, David I.: The Popes against the Jews, the Vatican’s Role in the Rise of Modern Anti-Semitism, pp. 106-130).

John Paul II’s active and passive endorsement of anti-Semitism shows that he was an anti-Semite who lacked a moral compass. The Vatican’s act of canonizing him shows that Christianity, its leadership, and institutions lack a moral compass. Western media has portrayed John Paul II’s canonization in sympathetic terms perhaps because Christianity is often seen as an ally of Western imperialism.

However, those with a modicum of moral decency cannot be mute spectators to this charade.

The author is a Silicon Valley-based writer, an atheist, a practicing orthodox Hindu, and author of “What Every Hindu Should Know About Christianity.”