Possible parallels in a meteorological tradition from India and South America 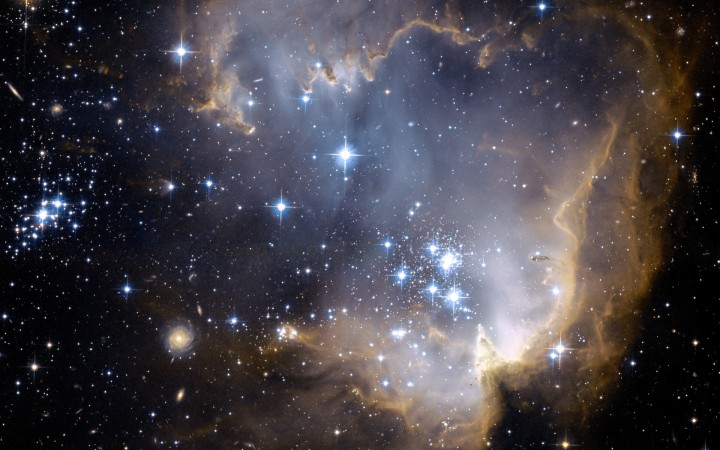 Research by Orlove, Cane and Chiang on the native weather forecasters in the mountains of Peru and Bolivia has brought to light an interesting tidbit of traditional knowledge [1]. The traditional crop of these regions is the potato, from where it has spread the world over to become a major source of nutrition, a delight to the tongue, and, more perversely, a cause of obesity and related troubles among the well-fed.

However, to farmers in this region a successful potato crop is crucial for their sustenance. Hence, these farmers forecast the auspicious time for planting potatoes by means of an unusual meteorological/astronomical observation. For a week around the summer solstice, they start intently observing the skies. At midnight they climb up to the peaks and start observing the Pleiades (M45 open cluster; Sanskrit: Kṛttikāḥ) a few hours before dawn, noting the apparent brightness and “sizes” of the stars in the cluster. Dimmer the Pleiades, the less will be the rain in the area during winter. Hence, if the forecast is dry then the farmers delay planting their potatoes to reduce losses. The fluctuation in local rainfall is attributable to El Niño Southern Oscillation, a meteorological phenomenon associated with a cyclical pattern of warm and cold temperatures in the tropical Pacific.

What the researchers found was that if an El Niño phase with low rainfall was to happen later in winter then it was accompanied by high cirrus clouds in the earlier summer. This in turn caused a dimming of the Pleiades when observed around the summer solstice. This use of the Pleiades as a meteorological predictor is an interesting twist to its more general use, in many ancient traditions, as a calendrical marker to determine various seasonal phenomena and agricultural activities.

This research leads us to a new insight regarding the basis for an ancient tradition recorded in the Veda of the Atharvāṅgirasa-s in a ritual incantation known as the śakadhūma sūktaṃ, which to date has been poorly understood. In the vulgate Atharvaveda (AV) text (considered to be the Śaunaka śākhā ) the sūktaṃ occurs as 6.128, while in AV Pippalāda śākhā (AV-P) the relevant mantra-s are AV-P 19.24.16-19.

It has long been suspected that these names are indicative of their connection with the arrival of monsoons. But were the Pleiades specifically used in weather prognostication in Hindu tradition? Here is where the evidence from the śakadhūma sūktaṃ comes in. The word śakadhūma is interpreted as smoke (dhūma) from a dung-pat (śaka) fire. But paradoxically we find the AV tradition remembering shakadhUma as a weather-predictor. Indeed, this is how the late medieval Atharvavedins seem to have understood the word in ritual context as indicated in their paddhati-s. The word has also been rendered as a human weatherman by modern white translators such as Whitney and Bloomfield.

The presence of the Paippalāda form of the text in the Nakṣatra-kalpa, a text with a slant towards prognostication, also reiterates the close connection of the weather-predictor śakadhūma with the nakṣatras. Realizing that a celestial entity is implied, some people have interpreted śakadhūma to mean the moon (as rājā of the nakṣatra-s) or the Milky Way (due to the “smoky” allegory). However, in no Hindu text known to date the term śakadhūma has been used to describe the moon, nor is the Milky Way ever described as the leader of nakṣatra-s. The original meaning of śakadhūma becomes clear from the ṛk found only in the AV-P version:

Here śakadhūma is plainly termed the first born of the great nakṣatra-s and as being at forefront of the celestial lights. This shows that śakadhūma was a constellation and the first in the list. In the AV nakṣatra sūktaṃ (AV-vulgate 19.7.2) the first in the list is Kṛttikā. The AV Nakṣatra-kalpa also explicitly states that Kṛttikā is the first of the nakṣatra-s with whom Agni blazes forth: “sa nakṣatrāṇāṃ prathamena pāvakaḥ kṛttikābhir jvalano no ‘nuśāmyatām |”.

So it is likely that the nakṣatra implied by śakadhūma was none other than Kṛttikā. This is further confirmed by Charpentier’s finding that in the medieval deśa-bhāṣā lexicon of the Jaina polymath Hemacandra-sūrī (the Deśī-nāma-mālā), he gives dhūma as a synonym for Kṛttikā: dhūmad-dhaya-mahisīo kṛttikāḥ | DN-5.63

This leads to one other reference to śakadhūma which is found in the great brahmodaya sūktaṃ in the Ṛgveda (RV 1.164):

Based on its deployment in the pravargya ritual, some have commented that the śaka-dhūma here refers to the smoke from the fire on which the mahāvīra pot is being fumigated. This external interpretation is of course for the “unenlightened”, for the rahasya-s (secrets) are concealed beneath the ritual actions described in the mantra. That is exactly what this whole sūktaṃ is about – rahasya-s, including several astronomical ones. This becomes very clear from use of a technical astronomical term – viṣūvat. In Hindu tradition, viṣūvat meant equinox [2] and in this context clearly means the vernal equinox which formed one of the central days of the yearly sattra. Thus, the ṛk means:

“From far I saw the śaka-dhūma at the equinoctial point further off from this lower one.

The heroes cooked the speckled bullock; these were the first stations.”

Here, the constellation at the vernal equinox (viṣūvān) is being described as śakadhūma. The lower one, the speckled bullock, the first (previous) stations appear to stand for Taurus. Taurus being the prior station stands for the position where the equinox lay prior to śakadhūma, which is being described as currently being at the viśuvān [3]. Here too śakadhūma implies the Pleiades. This would also suggest that the brahmodaya belongs to the same period as the core AV composition during which the Pleiades lay at the vernal equinox. Not surprisingly, a variant of RV 1.164 also occurs in the AV-vulgate as sūktaṃ 19.10.

Finally it leads to the issue why the name śakadhūma for the Pleiades?

In the AV context, the term śakadhūma is specifically applied in the context of predicting good weather. With high cirrus clouds, it is quite likely that the Pleiades appeared as a smoky patch in the sky, which was then used for weather prognostication. Under this interpretation the AV śakadhūma tradition is likely to be the earliest surviving record of weather prognostication based on the appearance of the Pleiades.

Now, given the South American tradition we suspect that indeed a smoky Pleiades was also, a prognosticator in India. Unfortunately, the original AV tradition is completely dead, hence only experimental verification can test the effectiveness of the method.

While the original AV tradition does not survive, we know from the much later meteorological traditions recorded in the Kṛṣi-parāśara (KP), a Hindu manual on farming, that knowledge derived from such observations did survive in some form. For example, the KP 23 gives a rough formula to determine the nature of the El Niño effects. KP 24-25 describes clouds associated with the cycle and mentions the puṣkara (cirrus) clouds that appear to prognosticate droughts. KP 33 indicates that the predictions were refined using wind-vanes to measure wind direction/speed and predict rain several months later.

1: An account of Orlove, Cane and Chiang’ work: http://earthobservatory.nasa.gov/Study/StarsCloudsCrops/

The metabolism in both the sleeping and waking states is comprised of prāṇa and apāna processes. Both are suspended in the deep sleep state when the samāna process functions, like what happens on the equinox.

Here the word viṣuvan (equinox) is used metaphorically to explain that state of equality or balance (samāna) when the prāṇa and apāna are suspended in the deep sleep state.

3: The memory of older equinoctial positions in Taurus and beyond where first proposed by the great patriot Lokamanya Tilak in his work: “The Orion or the antiquity of the Vedas”.

In the beginning- III: One or many