Prime Minister Narendra Modi: the promise of a resurgent India 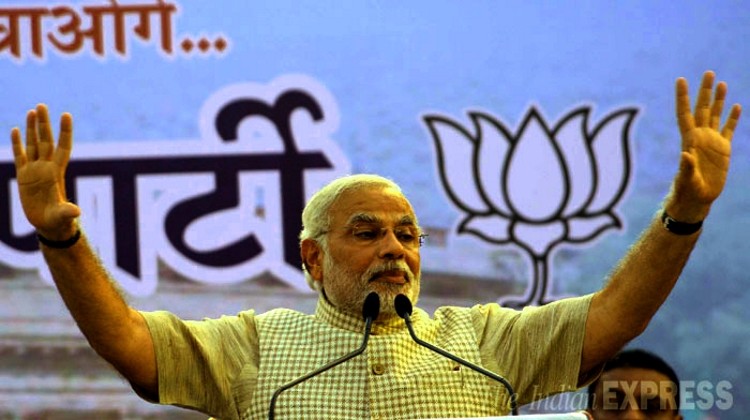 “Bliss it was in that dawn to be alive but to be young was very Heaven,” said William Wordsworth welcoming the fall of the ancient regime in France in 1789. Many of us  heard it from Hiren Mukherjee, then an M.P, again in a New Delhi rally in support of the freedom fighters of Bangladesh way back in 1971.  Once again, on 16 May midday 2014, one finds   millions of Indians actually witnessing this!

Yes, India  has  got  it finally! The eagerly-awaited  electoral defeat  of the UPA II, the most brazenly anti-Hindu government to have ruled India since the exit of the Mughals, and also the most corrupt, since independence, and a resounding victory of  Narendra Modi-led BJP  is indeed a milestone in our short history as an independent nation.

People in India, dejected and disillusioned over the years because an apathetic, hopelessly incompetent and clueless government, deliberately subverting the national interest, were desperately looking for a leader who could assure them this: “I hold that office upon the condition of being unshackled by any other obligations than those of consulting the public interests and of providing for the public safety” (Sir Robert Peel, 1846)

Hence  people of India do see a  halo around the persona of Modi, the like of which they had  never experienced. With the sole exception of Chatrapati Shivaji, who single-handedly brought the blood-thirsty tyrannical Mughals to their  knees, and then again Subhas Chandra Bose, who looked all set to lead India to its greatest ever glory, till he was felled by  British inspired Congress  ploys in 1939 and 1945 , there was never a saviour in sight.

Narendra Modi’s  electoral victory restores credibility and transparency to our Central government, dignity to millions of its citizens, and  gives us hope that the values of our freedom movement which were being systematically undermined by  Edvige Antonia Albina Maino-Ahmad Patel-led government, are back in the reckoning, and would henceforth shape the policies and programmes of this government.

The UPA carrying on business in the name of the Indian National Congress, had to go because it had turned into a negation of every principle professed by the founding fathers of Indian nationalism.

No sophistry could hide the bizarre fact that India, freed of  alien rule in 1947 after centuries of slavery was back in the clutches of an Italian, Edvige Antonia Albina Maino (Remember how cleverly Amartya Sen describes her as a Catholic, hiding her country of origin) about whose  antecedents the nation did not know and, whose sole claim to “leadership” was marriage into a family. And we have many, many families who had laid down their lives in the service of the nation during the freedom movement.

It was a matter of profound absurdity that the Chief Executive de jure of the government was a nominee of a naturalized citizen, a member of the Rajya Sabha, having failed to get elected to the Lok Sabha. Not unconstitutional strictly, but most certainly against the standard Westminster practice.  But then under such a Congress-led rotten system, who cares about niceties and dignity of the office of Prime Minster?

The UPA, was thoroughly disliked because it came to be seen  as  an United Pan-Islamic Alliance, and  earned the wrath of  self-respecting citizens because it was  continuously engaged in dividing and weakening India.  Beginning with the dangerous idea of religious census in the armed forces, and reintroduction of caste-census which even the colonial authorities had abandoned by 1931, it was seriously engaged in thrusting religious quotas for jobs. After all, India had already been divided on the basis of religion, leaving Hindus and Sikhs with a smaller arena, lesser opportunities and a reduced job market. After this came the UPA’s attempt at nibbling at the remainder!

The UPA had more in its despicable agenda. Even genuine security operations were being trivialized and misused to torment Narendra Modi despite absence of credible evidence. Jihadi operations were rationalized, perhaps also justified. And to add salt to the injury was the maliciously drafted Communal Violence Bill and a chain of Aligarh Muslim universities, to commemorate the doyen of Muslim separatism in 19th century. So much for the cause of Congress brand of secularism, which breaks India!

The Edvinge Antonia Albina Maino-Ahmad Patel duo went even further. With the help of a Jihad -friendly “secular” media and “liberal intelligentsia” in tow, it went ahead and manufactured the most vicious Black propaganda: a mythical Hindu terrorism, when nothing like this could ever exist. Time had certainly come for an end to such despicable attempts to blacken the name of a tolerant and ever accommodating Hindu society. It was this low-level politics aiming at the maximum possible squeezing of vote bank that urgently needed to be ended forever.

Hence the victory of Narendra Modi also signals the relevance of national interest as distinct from the primacy of a dynastic cabal.

As for national security, we all know that the roasting alive of 59 kar sevaks on the Sabarmati Express was merely the precursor of a massive all-India jihadi operation. Modi’s firmness in dealing with the fallout was a tremendous achievement, neutralising similar or worse mayhems.

Mollycoddling Pakistan and serving biriyani to its Jihadi-VIP visitors, bracketing Pakistan with India as a victim of terror, the Baluchistan reference by Manmohan Singh, and an-all-too-obvious policy of letting off Pakistan easily was a well-orchestrated and dangerous policy of  keeping the  ummah pleased.

Also consider Salman Khurshid’s gloating over the relevance of the descendants of invader Babar. The message that went out was  that the majority of the people, and their wounded civilization have no resistance left, and thus no future.  His brazen servility towards an expansionist China was a further proof of this mindset. The UPA was systematically aiming at the disempowerment of the majority of Indians. That is why Narendra Modi’s message was easily accepted and not because of his “masculine nationalism” as our ill-trained social scientists and news traders had reveled in calling him.

What made people eager for change was the UPA’s preference for politics at its lowest level.  And why not? After all, water seeks its own level. What began with Maino’s outrageous “maut ka saudagar” barb came to be duly reflected in the filthy invectives of the  likes of  Mani Shankars  and  Mamatas.

Narendra Modi’s record of governance in Gujarat, the BJP manifesto and Modi’s own campaign aimed at restoring the spirit of Swarajya has finally triumphed. The nation has a reason to rejoice that the very fundamentals for a national resurgence, rectification and creativity are back with a bang in the national mood.