Rakhigarhi and After- V: POSTSCRIPT- Indus Script at Keezhadi 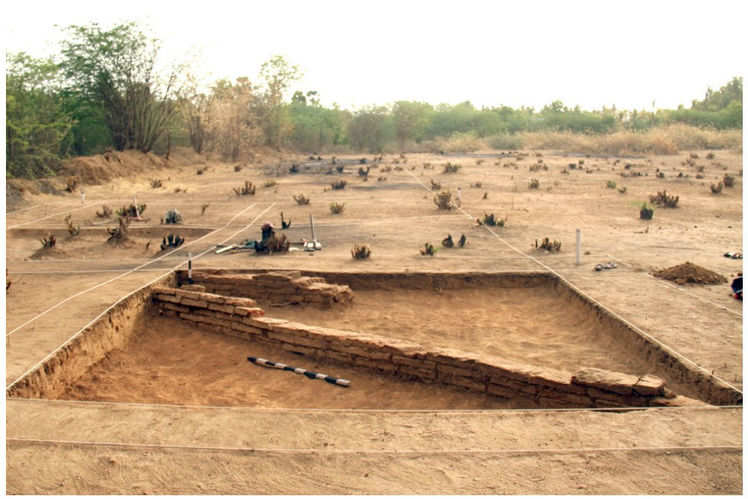 At the last minute I have to add this postscript to the article because today, 20/9/2019, Scroll.in has just published an article claiming that the archaeological findings in Keezhadi in Tamilnadu have revealed a continuation with the Indus Script. The article entitled “Tamil Nadu: Artefacts dated to 580 BCE hint at script continuity from Indus Valley Civilization” with the sub-title “The findings at Keezhadi, near Madurai, push back the date of Tamil Brahmi script, which is the precursor to modern Tamil, by another century“, tells us: “Artefacts found at the archaeological site in Keezhadi, about 12 km from Madurai in Tamil Nadu, have been dated to 580 BCE, with “graffiti marks” on them pointing to a possible continuity in script from the Indus Valley Civilisation. The findings were made in a report by a team that conducted excavations at the site. The report is significant because Dravidian movement politicians in Tamil Nadu have long claimed that the people of the Indus Valley Civilisation could be ancestors of the modern Tamils. However, archaeological and genetic evidence to establish the link was not strong so far. None of the three earlier major excavations in the region had provided strong evidence of an ancient urban settlement – a significant feature of the Indus Valley Civilisation.“

On the warpath, the AIT-mongerers in scroll.in seem to be in a tearing hurry to do what they would probably choose to describe as “driving the last nail into the coffin of the OIT” – one more in an unending series of last nails! However, their present attempt raises many curious points.

The Keezhadi excavations had certainly uncovered an important part of our great heritage in Tamil Nadu, and this predictably resulted in a tussle between two extremist ideologues in India: the Dravidianists in the South for whom the AIT forms the base of their separatist tendencies, and the extreme Vedicists in the North who view any part of our native Indian heritage not derived from the Vedas as something to be looked at askance. I have already dealt with this issue in an earlier article in Swarajya published on 4/4/2017.

Now the two recent genetic reports have suddenly heightened the adrenaline in the hearts of these ardent AIT-warriors, and this article on Keezhadi is one of the results of this. But what are the facts in the case behind the venomous innuendo in the article? The main point made seems to be that the report by the archaeologists conducting the excavation shows that “56 potsherds were recovered from the excavation conducted by the Tamil Nadu State Archaeology, with inscriptions in Tamil-Brahmi, the precursor to modern Tamil. ‘The recent scientific dates obtained for Keezhadi findings push back the date of Tamil-Brahmi to another century i.e. 6th century BCE,’ the report said.” Great news, but does it show what the scroll.in article is claiming?

The writer of this article in scroll.in, Sruthisagar Yamunan, draws a connection between the “graffiti marks” on the Keezhadi pottery and the Indus script, presumably on the above note in the report. This must be the only, or most explicit, such claim in the report, or else we would have had more explicit quotes. We also have a quote about the Tamil-Brahmi alphabet: “The report said: ‘Tamil-Brahmi letters as part of inscriptions are found engraved on the shoulder portions of the earthen vessels. In general, these letters were inscribed when the pot is in leather condition or were inscribed/engraved after the pot became dry. The letters engraved in leather condition could be made only by the potters at the time making pots. In the case of Keezhadi examples, they were all post-firing in nature and were engraved by the owners after purchasing the pots. The representation of various styles of writing also suggests this view. It clearly suggests that the literacy level of the contemporary society that survived in 6th century BCE.’“

Note that while it is perfectly true that the Brahmi script must ultimately be derived from the Indus script, that is not what the western academicians are saying: they claim that the Brahmi script had a totally different origin (and try to search for that origin in scripts of West Asia). This report at least shows or concedes that “These graffiti marks are the one evolved or transformed from Indus script and served as precursor for the emergence of Brahmi script“.

But this article (and possibly this report also, if the writer of this article is interpreting it as intended by the archaeologists concerned) raises a very basic question: Are the writings found on the potsherds in the Tamil-Brahmi script which can be read, or are they in the form of “graffiti marks” which, “Like Indus script, […] also could not be deciphered till date.‘“? They cannot be both.

The undeciphered graffiti marks on potsherds in different parts of the country, representing the precursor forms of the different fully developed Brahmi scripts, will, unless the evidence after they are deciphered shows otherwise, likewise record both Indo-Aryan and Dravidian languages.

So, even though they cannot be read, it will be logical to assume that the graffiti marks on potsherds in Tamilnadu record a Dravidian language.

Just rhetoric and media frenzy cannot prove or disprove historical points. It will be better if chauvinistic tendencies and venom are kept out of the debate. To repeat what I have said umpteen times: unless and until the Harappan script is deciphered and proves the Harappan language to be non-Indo-European, the only valid evidence to decide the language of the Harappan civilization is the data for the chronology and geography of the Rigveda, which presents an irrefutable case showing that the entire Harappan area, as well as areas to the far east of it were purely Indo-European language speaking areas from well before 3000 BCE.

Incidentally, note the scientific precision of the scholars at scroll.in: the article ends with a note in italics: “An earlier version of this article wrongly mentioned the date of the artefacts as 583 BCE.” So the editors at scroll.in can go to this high degree of precision where even a difference of three years shows up in their carbon analysis! Carbon-dating experts from all over the world must be stunned at this super-advancement in technique and analysis.

Rakhigarhi and After- IV: The AIT Brigade after Rakhigarhi

Rakhigarhi and After- III: The Real Evidence versus the Manipulated Propaganda