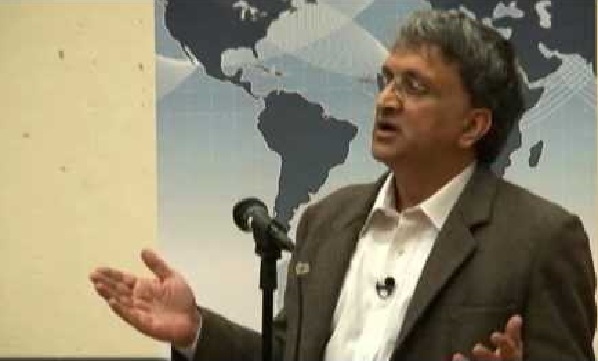 In the 12 January edition of Hindustan Times, eminent Nehruvian Ramchandra Guha expressed dismay over the controversy surrounding the Indian Science Congress where it was claimed that ancient Indians were well versed in aeronautical technology among other things.

First of all Mr. Guha should be informed that the the section under which the much controversial paper was included has itself been titled ‘Vedic Mythology about Aviation’. So the Indian science congress organizers were clear about the distinction between mythology and aeronautics.

Now it is often mentioned in many non-Hindutva journals also that Shivkar Bapuji Talpade a Maharashtrian scientist did make a contraption fly in the air before a large audience in the Chowpathy beach of Mumbai, which included the famous Indian reformer Mahadev Govind Ranade and the Maharaja of Baroda Sayaji Rao Gaekwad. Some documents related to that experiment have been preserved at the Hindustan Aeronautics Limited in Bangalore. But it has to be acknowledged that Talpade’s experiment cannot change the fact that the Wright brothers were the ones who succeeded in the attempt of a manned flight.

Mr. Guha should have some pride over the fact that someone in India at least tried such an experiment. Anyhow let us see the relevant section of Mr. Guha’s flustered article:

As that sturdy bellwether of the conventional wisdom, Thomas Friedman of the New York Times, wrote in 2005, India, once ‘known as a country of snake charmers, poor  people, and Mother Teresa’, was being ‘recalibrated’ as ‘a country of brainy people and computer wizards’.  This ‘recalibration’ was eagerly lapped up by the Indian press, with mass-circulation magazines running cover stories entitled ‘Global Champs’ and ‘On the Way to Number One’.  It was argued that while Chinese growth depended on sweated labour, the Indian miracle was driven by knowledge and hence of greater worth — as well as more sustainable in the long run.

I heard this talk with some bemusement. I was living in Bangalore, presented as the ‘centre’ of the ‘knowledge revolution’ allegedly sweeping my country. But I suspected that writing code was not necessarily the same thing as producing original scientific knowledge. And I knew for a fact that Bangalore itself did not have a single decent library, while the city’s main university had not produced much original research in the past three decades. To be sure, there were isolated examples of excellence. In my city, we had the Indian Institute of Science and the National Centre for Biological Sciences, both reasonably well-functioning centres of scientific research. Elsewhere in my country, there were such places as the Tata Institute of Fundamental Research in Mumbai, and the Centre for Cellular and Molecular Biology in Hyderabad. And both Delhi University and Jawaharlal Nehru University had some fine social scientists and historians on their faculty. Yet in the aggregate, the quality and quantity of cutting-edge research was woefully meagre for a country as large as ours. The talk of India becoming a ‘knowledge superpower’ was not just premature. It was, frankly, absurd.

[pullquote]One cannot wish away the epics as mere myths just like one cannot call it irrefutable historical proof until concrete evidence is documented.[/pullquote]

If one notices the timeline, Mr. Guha mentions that the past ‘three decades’ meaning 1960-1990 timeline: one would be baffled. Is Mr. Guha unaware that these were the decades when India was under the firm grip of the Nehruvian establishment which gifted the nation with a stagnant rate of economic growth derisively called ‘Hindu rate of growth.’

Ram Guha often reminds us that as PM, Nehru led to the establishment of the IITs as well as Centre for Science and Industrial Research (CSIR) and the Defence Research and Development Organisation (DRDO). In which case, Mr. Guha, why was there so much of stagnation in research? Mr. Guha can find his answer in the following excerpt from an informed piece:

It is true that as the first prime minister of India who governed for 17 years, Nehru established several institutions. But what is equally important to recognize is the condition to which these institutions were reduced by the Nehruvian ideal of socialism. Tripathi informs us that 45 labs were established by Nehru. Thanks to Nehru’s dogged commitment to socialism, which has been resolutely practiced by his party since his demise, these labs became institutionally decrepit and pathologically unproductive.

In 1989, a Council of Scientific and Industrial Research (CSIR) lab director had remarked that “asking scientists to do industrial research is close to prostitution” – such was the mindset of the leaders of government research laboratories. The disdain towards industry and profit defined the CSIR culture for decades – the cue came from Nehru who was acerbic towards private industry, and famously said once that profit is a dirty word…As for DRDO, it continues to be an inefficient, bureaucratic organization. It begun developing the Arjun tank in 1972, and it took 32 years for the tank to enter production. Costs for the Arjun tank escalated from Rs 155 million in 1974 to Rs 3 billion by 1995. DRDO’s Tejas light-combat aircraft development program commenced in 1983, and took some two decades to complete its maiden flight, finally inducted into the Air Force last year after nearly almost 30 years. Smaller-scale projects that DRDO has worked on include mosquito repellents, body creams for keeping insects away and new fabrics for bras – these are hardly cutting-edge areas of defence research…..

Mr.Guha also credits both Delhi University and Jawaharlal Nehru University for having some ‘fine social scientists and historians on their faculty.’ Interestingly, some months ago, Mr. Guha made this observation in an article he penned for Telegraph:

…in 1972, the government established an Indian Council of Historical Research instead. The education minister at the time, Nurul Hasan, was himself a historian. Those who promoted and ran the ICHR were, in personal terms, close to Professor Hasan. In ideological terms, they were Marxists or fellow-travellers. …. The ICHR, on the other hand, was from the beginning dominated by left-wing historians who favoured themselves and their friends in the distribution of funds for research, travel, and translation.

Mr. Guha must clarify this: are these same ‘Marxists-fellow-travellers’ the ‘fine social scientists and historians’ of DU and JNU? If yes then Mr. Guha , you must be aware how these ‘fine historians’ emphasized more on ideological distortion over carrying out authentic research. If you need evidence I suggest you go through Arun Shourie’s Eminent Historians.

Towards the end of the article Mr. Guha asserts:

Professor Rao’s appointment as head of the ICHR was widely criticised at the time, for he has published not a single scholarly paper in a peer-reviewed journal. This interview does reveal him as a rather special kind of ‘historian’, whose own models are (in his words) ‘people like Valmiki [who] were scholars documenting their lives. We believe that they are rishis, who know the past, present and the future’.

Mahatma Gandhi once said that the Mahabharata should be seen as allegorical rather than a work of history. Most Indians take this as a sensible approach to what is a gloriously detailed epic, rich in poetry, allegory and moral teachings, but not necessarily history as we know it. But Professor Rao is in little doubt that the incidents described in the Mahabharata actually happened. He hopes that the ICHR, under his leadership, will make the Mahabharata the ‘anchor for the History of Bharat….. The Republic of India is not becoming a scientific superpower any time soon. We may however console ourselves that we are already the myth-making superpower of the world.

On the question of Ramayana and Mahabharata, this report will give some support to Rao’s assertion:

Prof. B. B. Lal, the former ASI Director General launched the first excavation at the Purana Quila site in 1954-55 in which he found structures ascribable to the Gupta, Kushana and Sunga periods.

“The trial excavation was alongside the passage leading down to water gate in the eastern fortification wall of Purana Quila. The trial trench revealed that below the northern black polished ware levels lay the remains of the painted grey ware culture. Between the south of the PuranaQuila and Humayun’s Tomb, there is an open area from where a number of painted grey ware were discovered. It was here that the oldest settlement began.”

Prof. Lal said the polished grey ware is the earliest common pottery connecting all the Mahabharat sites such as Hastinapur, Mathura, Kurukshetra and Kampilya.

One cannot wish away the epics as mere myths just like one cannot call it irrefutable historical proof until concrete evidence is documented. But the record of Marxist historians’ (lapsed in this case) special relish in diminishing Indian heritage is voluminous, which explains Mr. Guha’s disdain for India’s ancient epics which have stood the test of time.

As for Mr. Guha’s derision on India being ‘the myth-making superpower,’ scholar Michael Danino gives a fitting reply:

Independent India did little to promote the field: no Indian university has a department of history of science. Search the Internet for a substantial resource on past Indian mathematicians and you will soon reach the website of Scotland’s University of St. Andrews. Indeed, scholars from the U.S., France, Japan or New Zealand have in recent years contributed important studies to the field. On the other hand, most of their Indian colleagues — thankfully there have been quite a few and of a very high order — have worked with little or no institutional support. It is hard to understand why our educational system and intellectual circles have failed to realise the importance of history of science as a full-fledged academic discipline…what is “scientific” about suppressing the genuine achievements of Indian science? If our students had substantial exposure to them, they would feel no need to let their imagination run wild.

It seems Mr. Guha is still unable to lapse himself from Marxism according to which data can become valid only when it becomes slave of Marxists’ vested interests.