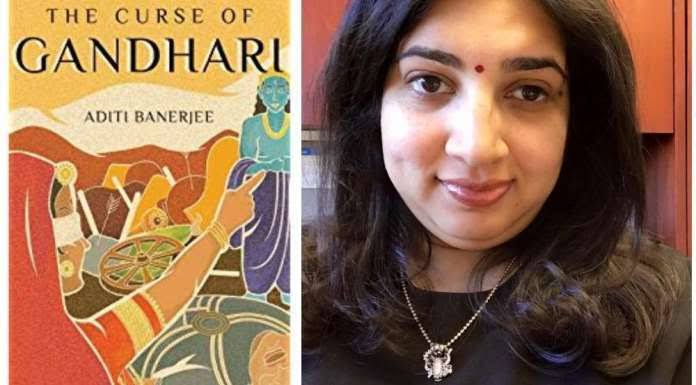 “In this insightful and sensitive portrayal, Aditi Banerjee rescues Gandhari from being reduced to a mere symbol of her blindfold. She builds her up, as Ved Vyasa did, as an unconventional heroine of great strength and iron will – who, when crossed, embarked upon a complex relationship with Lord Krishna, and became the queen who cursed a God” -reads Bloomsbury’s description of their recent book “The Curse of Gandhari” by Aditi Banerjee.

Aditi Banerjee is a practicing attorney in the greater New York area. She is on the Board of Directors of the World Association for Vedic Studies (WAVES) and has organized and presented at global conferences on matters related to Dharma. She co-edited the book, Invading the Sacred: An Analysis of Hinduism Studies in America, and has written widely on Hinduism and the Hindu-American experience.

Her latest book “The Curse of Gandhari” is a fictional re-conceptualization of Gandhari –one of the prominent characters of Mahabharata –and through her an exploration into human condition, Dharma, and Bhakti.

On behalf of IndiaFacts, I interviewed the author on her book, her engagement with Mahabharata, and her journey as an author. Here is the full text of the interview.

Nithin Sridhar (NS): Congratulations on the publication of your first book. Do share with our readers about your journey into writing and what inspired you to become a fiction author.

Aditi Banerjee (AB): I’ve always enjoyed creative writing, especially writing fictional stories, ever since I was a child. However, once I went to law school and started practicing law, I stopped writing fiction. I thought of it as an either-or proposition – either you were a writer or you did something else. It was after my father’s death when I started taking creative writing classes, including some sponsored by Indic Academy, to help fill the void that I came back to creative writing as a serious pursuit.

For me, writing is meditation and sadhana. Entering the world of our devatas through writing stories based on our sacred literature – this is a practice and expression of my bhakti by connecting through our deities through the medium of visualizing, imagining and then sharing their stories.

NS: In the book, you have provided a very balanced, nuanced, delicate, and sympathetic portrayal of the character of Gandhari. But, why Gandhari? What made you choose her among so many inspiring and interesting characters from Mahabharata?

AB: I don’t know if I chose her or she chose me! Well, I have always been fascinated by Gandhari, ever since childhood. I found it terribly moving and romantic how she blindfolded herself for her husband the moment she learned of their impending marriage. Then, too, the moment she cursed Sri Krishna at the end of the war, a curse that he accepted with a slight smile, and the terrible end to her life, after she lost all of her sons. She was a woman of incredible tapasya and willpower, on the one hand, and yet one who found herself on the side of adharma, on the other hand. She was neither a conventional heroine nor a real villainess. The complexity and pathos of her character drew me.

NS: At many places in the book you have compared and contrasted the attitude, temperament and values of Gandhari with Kunti. Can you shed more light on this aspect? What is the most striking difference between these two characters who otherwise have a similar Kshatriya upbringing married into same Kuru family?

AB: The Mahabharata itself draws interesting parallels and contrasts between them. Obviously, both are devoted wives and mothers preparing themselves and their sons for a terrible war; they are sisters-in-law and rivals for the throne of Hastinapur; yet, at the end of their lives, Kunti follows Dhritarashthra and Gandhari into the forest to serve them and they die together. While they were rivals, at the end, they were still, in a sense, sisters.

While Gandhari takes an unwavering, uncompromising vow of pativrata by blindfolding herself for her husband, heedless of the consequences of doing so, Kunti steps back from the sacrifice of sati in order to take care of both her own and Madri’s sons.

While Gandhari curses Sri Krishna, Kunti prays to Sri Krishna to bring her an endless series of sorrows so she may never forget him.

So, while they find themselves in similar situations and with a similar upbringing, they take drastically different, sometimes diametrically opposed, paths as a result of their own character and exercise of free will.

Kunti is able to against all odds keep her five sons together, while, in a sense, Gandhari fails to do so.

NS: In my limited reading of Mahabharata, one interesting parallel I found was how the unwavering adherence to vows taken by both Bhishma and Gandhari eventually led to the fall of Great War. Bhishma was the righteous and the most competent heir to the throne, yet owing to his vow he refused to take up his responsibility towards his people and the kingdom, thereby leading to a series of disaster after disaster ultimately ending in the Great War. Likewise, Gandhari, if she had chosen to not blindfold herself, could have led the kingdom to greatness as a capable and righteous queen, perhaps provided a good role model to Duryodhana or at least prevented him from creating the chaos that led to the Great War. What is your view on this?

AB: It is an important and insightful parallel that you’ve described. It is also interesting, because Bhishma is the one who asks Subala, the king of Gandhara, for Gandhari’s hand in marriage, so the story links them together early on. They both made sudden, impulsive vows for their families, lifelong vows that offered no compromise. Both won accolades and power from their vows; Bhishma was given the power to choose the moment of his death, and his very name was changed to reflect his vow, whereas Gandhari gained enormous tapobala, enough to protect her son from death through the mere power of her gaze and to curse Sri Krishna himself.

However, the Mahabharata shows how dangerous such vows can be, the unforeseen webs of karma that arise as a result. Just because an act is virtuous, is it necessarily the correct act of dharma? After all, Bhishma was a prince and Gandhari a princess. Did Bhishma have the right to put his father’s happiness above the welfare of the kingdom? Was Gandhari’s act of devotion the best she could have done for her husband, or could she have been a better wife by providing him the gift of her eyesight? There are no easy answers, but the Mahabharata counsels us to be careful of the vows and promises we make for we cannot always foresee the consequences.

NS: How do you approach Mahabharata- as history, literary creation, or as a manual of Dharma & Moksha?

AB: First and foremost, it is sacred literature, it is Smrti. Vedavyasa is no less than Vishnu (vyAsAya vishnu rUpAya vyAsa rUpAya vishnavE). The Itihaasa and Puranas are revered as the Fifth Veda because they are the distillation of Vedic knowledge in the form of stories that are relevant and meaningful to the masses. Therefore, we must regard them with shraddha, meaning that if we have a doubt or do not understand something, instead of concluding there is something wrong with the text we must see whether there is something faulty in our understanding. We must understand how the lineage of acharyas and rishis have understood the texts and ensure that our own understanding is consistent with that to generate the proper benefits and learnings from the text.

Therefore, the Mahabharata cannot be understood as mere history in a literal, linear sense, although certainly points of historical interest can be gleaned from reading the text. Nor can it be seen as a mere story or literary creation. It is the embodiment of thousands of years of our sacred history and wisdom tradition.

The Mahabharata, in particular, is focused on teaching Dharma, particularly in situations that are not black-and-white, where there are competing priorities and values, where it is not always easy to ascertain what the appropriate path of dharma is. This is the world in which we find ourselves today, and I can think of no better guide than the Mahabharata in teaching us how to live effectively and dharmically in a constantly changing environment where there is often mass confusion and chaos.

NS: Are you working on any new book project? Do you plan to write about any other characters from our Itihasa-Purana tradition?

AB: I am working on a few! One is a contemporary story about an Indian-American girl and a mystical relationship she develops with Krishna, forcing her to choose between her home and family and a life in Krishna’s world. With respect to the Iithasa-Purana tradition, I’m working on a book about the Pancha Kanya and another one that is a retelling of the love story between Shiva and Sati / Parvati. Some other projects I have in mind are a historical novel about the great queen, Rani Ahilyabai Holkar, and a more scholarly book on Hindu law from my perspective as a trained and practicing lawyer. Lots of projects, very little time!