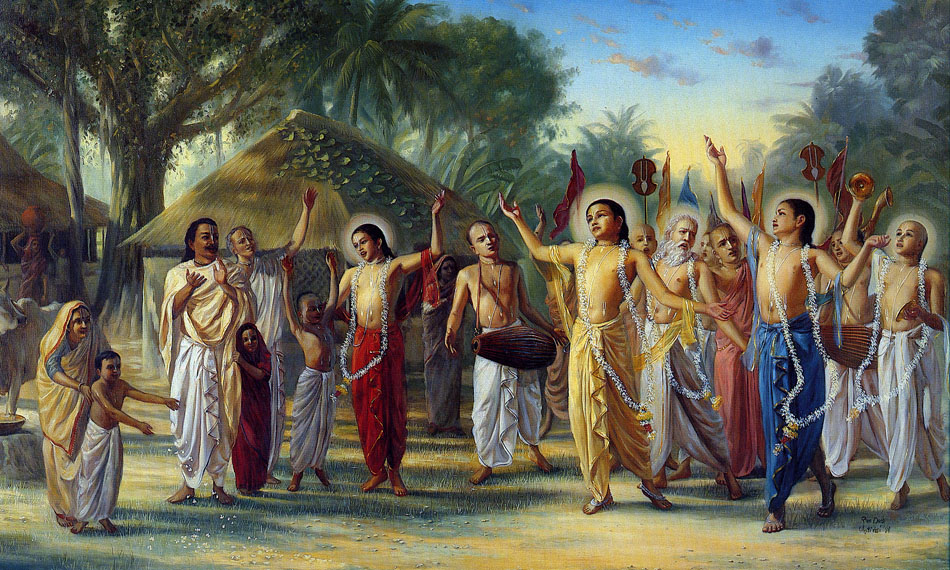 In the concluding portion of Part I of this series, I noted that in his phenomenal work on Bhakti titled Bhagavad-Bhakti-Rasayana, Madhusudhana Saraswati (MS) describes Bhakti as the Parama Purushartha or the Supreme goal of life.

It is well known that Hindu dharma speaks about four fold goals of human life termed as “Chaturvidha Purushartha”, with “Purusha” referring to human and “Artha” referring to an object or a goal. The four-fold goals of human life are- Dharma, Artha, Kama and Moksha. While Kama refers to worldly desires, Artha refers to worldly prosperity. Moksha, on the other hand, refers to the ultimate liberation from this cycle of birth and death, which results from attaining freedom from desire. Dharma refers to righteous duties, which acts as a link between Artha and Kama, on the one hand, and Moksha, on the other, and facilitates attainment of Artha and Kama, all the while also leading one towards dispassion and Moksha.

In this scheme of Purusharthas, which are four in number, Moksha, which constitutes absolute freedom, is posited as the ultimate goal of life. If this is so, why does MS call Bhakti as the Highest Purushartha? What is the implication of such a designation?

These are the questions we would be reflecting upon in this article.

Bhakti as a Purushartha

Srimad Bhagavatham, which was specifically composed by Veda Vyasa for recounting the glories of Sri Krishna and for enunciating the tenets of Bhakti Yoga, posits Bhakti as the Supreme goal of life. In Chapter 11, Verse 32-34, the text says:

“Everything that can be achieved by fruitive activities, penance, knowledge, detachment, mystic yoga, charity, religious duties and all other means of perfecting life is easily achieved by My devotee through loving service unto Me. If somehow or other My devotee desires promotion to heaven, liberation, or residence in My abode, he easily achieves such benedictions. Because My devotees possess saintly behavior and deep intelligence, they completely dedicate themselves to Me and do not desire anything besides Me. Indeed, even if I offer them liberation from birth and death, they do not accept it.”[Translation: Bhaktivedanta VedaBase]

What is interesting in the above quoted verses is that, on the one hand, Bhagavatham posits Bhakti as the supreme goal for a devotee by noting how a devotee will not even desire for liberation and on the other hand, it also posits Bhakti as being capable of granting the four-fold Purushartas by noting how it can grant, heaven, liberation, etc. MS, who builds upon on this viewpoint put forward by Bhagavatham, concludes thus in his own commentary on the first verse of his Bhagavad-Bhakti-Rasayana: “Therefore the statement that the yoga of devotion is the goal of life, either as included in one of the four commonly accepted goals or independently, is beyond dispute, because it is supreme bliss.”[Translation: Lance E. Nelson]

That is, Bhakti can be understood as being:

Let us examine each of these positions in a little more detail.

Bhakti as implicit in each of the four-fold Purusharthas

When it is said that Bhakti is implicit in the four-fold Purusharthas, what MS means is that Bhakti is related closely to the four Purusharthas and this relationship is of the nature of cause-effect, with Bhakti occupying either the position of the cause or that of effect.

In the Bhagavatham statement, we saw in the previous section, Bhakti yoga is the cause which can grant Moksha or Heaven (which comes under Kama). Thus, MS rightly notes: “…the bliss of devotion may also be included within final liberation because release from transmigratory existence is inevitable for the devotee.” Noting that the same Bhakti can also act as the effect that arises from a Purushartha, MS writes: “Or equally, it can be said that the yoga of devotion is included within Dharma because it is produced by the Bhagavad-Dharma (the spiritual disciplines of the Lord’s devotees).”

Further, in Mahabharata Anusasana Parva, when Yudhishtira asks Bhishma “What is that Dharma, which is the greatest among all the Dharmas?” Bhishma answers that the practice of Bhakti towards the Supreme Lord is the highest of all Dharmas. In other words, Bhakti is not only the effect in relationship to the Purushartha of Dharma, it is in fact, the highest Dharma itself.

A similar assessment is made by Adi Shankaracharya (hence forth, Acharya) regarding Bhakti’s relationship to Moksha. In Shivanandalahari (Verse 33), after noting that Bhakti in itself is enough for attaining Moksha, he boldly asks “Indeed, what else is Mukti all about? Why should one pray for anything other than Bhakti?” [Translation: S Balakrishnan] Then, again in verse 91, the revered Acharya explains “I will always worship you (i.e. Lord Chandrashekhara) and think of your holy feet, which by itself is Mukti”. In other words, Bhakti is not only the cause of the Purushartha of Moksha, but is Moksha in itself! It is no surprise then that the Acharya remarks thus in verse 63: “What is there in this world that devotion to the Lord cannot do?”

Bhakti as the Independent Purushartha

MS does not stop at asserting Bhakti as a goal of life in the sense of Bhakti being implicit in other Purusharthas. He goes on to assert that Bhakti is an Independent Purushartha on its own standing and as such is also the highest goal of life.

To substantiate his assertion, MS examines the very foundation of the Purushartha framework. He examines questions such as what is it that makes the four-fold goals of Dharma, Artha, Kama, and Moksha to be designated as Purushartha? Why the liberation is considered the ultimate goal of life? What is the basis on which the notion of Purushartha is established?

Noting that it is the attainment of bliss, unmixed with suffering which is the defining factor of a Purushartha, MS writes: “It is the established doctrine of all systems that bliss unmixed with any suffering is the highest goal of life. The commonly accepted view that there are four goals of life–namely, religious duty, the acquisition of wealth, pleasure, and final liberation–is to be taken figuratively.” That is, though Dharma, Artha, Kama, Moksha are designated as Purusharthas, this designation is only figuratively used in the sense that they are the means for the attainment of true Purushartha, which is “bliss unmixed with sorrow”. MS gives the example of the common phrase “Langalam Jivanam”- “the Plough is life”, where the plough is only figuratively called life in the sense that plough acts as a means for earning livelihood in a rural society. Similarly, in the case of Purusharthas, “Bliss, unmixed with sorrow” is the true goal of life. MS, thus concludes: “Religious duty, the acquisition of wealth, and pleasure are not in themselves independent goals; the bliss arising from them is the goal of life. We can, therefore, omit the qualifications ‘arising from religious duty,’ ’arising from wealth,’ and so on, because they lead to prolixity and excessive restriction, and demonstrate that bliss alone is the goal of life.”

MS adds that other Purusharthas like Vedantic Moksha is considered the goal of life because of “the very reason that it is supreme bliss.” Likewise, MS argues that “since it (Bhakti) is nothing more than bliss unmixed with suffering, Bhakti to the Blessed Lord also is the highest goal of life.” Again, how do we know that Bhakti is Supreme bliss? It is because, Bhakti is so by its very definition.

Narada Bhakti Sutra (Verse 2-3), for example, defines Bhakti as being the form of “of Supreme Love towards God, which is of the nature of Amruta/Nectar”. Amruta implies infinite bliss untouched by sorrow. Then, the revered Shankaracharya indicates Bliss as the very nature and the spontaneous outcome of Bhakti a number of times in his Shivanandalahari. In verse 12, for example, the Acharya notes that irrespective of whether one is in a cave, a house, forest, or at the top of a mountain, if one’s mind dwells at the feet of Lord Shambhu, he will be established in highest bliss. Again in verse 68, the Acharya notes that the cow of Bhakti yields the milk of limitless joy and bliss. In verse 93, Bhakti is again connected to delight and joy. It is no surprise then, MS defines Bhakti as “nirupama-sukha samvidroopam asprushta-duhkham- experience of incomparable bliss untouched by any suffering” in the very opening verse of Bhagavad-Bhakti-Rasayana. In this context, Sri Abhinava Vidyatirtha Mahaswamiji makes an interesting observation. He notes that while in Jnana yoga, the yogi experiences bliss only on attaining his Sadhya i.e. goal and not during Sadhana or practice, a yogi practicing Bhakti will always experience joy i.e. there is joy both during Sadhana as well as on the attainment of Sadhya.

Therefore, it is not surprising that Bhagavatham quoted before says that a devotee completely dedicates himself or herself to the Supreme Lord and does not desire anything besides the Lord, not even liberation. A sentiment, beautifully expressed by Shankaracharya, when he says: “Thousands of Gods abound, offering trifling gifts to them who pray, and never even in my dreams would I pray. Or request gifts from them….I would beseech and beg always, For his lotus like feet.” (Shivanandalahari verse 4).

Whether it is through its implicit presence within the four-fold Purusharthas, including Moksha or as the independent means leading to Supreme bliss, Bhakti is indeed the Supreme goal of life.