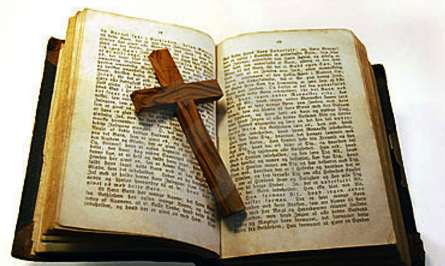 In a recent blog, the leftist Indian journalist Sagarika Ghose traces the origin of the caste system to a verse in the Puruṣa Sūkta and makes an appeal to publicly re-write the hymn, which she claims is fundamentally unjust. Her understanding of the hymn is incorrect and her assertion no more than a repeat of the 19th century Christian propaganda. However, I am not going to defend the hymn or explain its correct meaning in this article. But I will mention that only a scientifically ignorant person would continue to think that some scripture created the caste system. So, it is not necessary to refute Ghose’s claims in further detail.

Instead, I am going to agree with her that if a religious text is unjust or intolerant, it should be rewritten or even abandoned. In light of this, I am going to evaluate a few Christian teachings in the Bible to argue that they are unjust.

The New Testament calls the Jews “Christ-killers,” “children of the Devil,” “brood of vipers,” etc. Many of these anti-Semitic phrases were uttered by Jesus himself (e.g., Matthew 3:7). Norman Beck, a distinguished academic and Lutheran theologian, demonstrates that the New Testament contains over 450 anti-Semitic remarks [1] — thus making the Bible the most comprehensive hate-filled anti-Semitic scripture in the world. As Richard Dawkins points out, Martin Luther and Hitler were inspired by Jesus when they too called the Jews a “brood of vipers [2].” The Nobel Prize winner Elie Wiesel has shown that the Nazi system was the consequence of the Christian tradition and teachings and was inseparable from it [3].

At the minimum, this alone would require rewriting over 450 verses of the Bible as they have been unjust when seen from the perspective of a Jew or any civilized person. One may consult my paper From the Holy Cross to the Holocaust [4], where I discuss many other anti-Semitic Christian teachings to expand on the list of verses to be rewritten. But rewriting 450 verses would be a welcome start.

A law enshrined in The Bible (Deuteronomy 22:13-21) requires a groom to drag his bride on the nuptial night to her father’s doorstep and stone her to death on the suspicion that she may not be a virgin. It urges onlookers to participate in this violent orgy. Our leftist ideologues may think that virginity is just a big issue over a small tissue but Jesus thought otherwise. Jesus announces that he has come to fulfill misogynistic laws unto the last word (Matthew 5:17). This announcement makes the Taliban look like progressive feminists in comparison to Jesus. So, one may consider giving Jesus a makeover. ‘Botox for Jesus’ could be a worthy creative pursuit.

The New Testament urges Christians to wait for the Second Coming of Jesus. On this occasion, the cosmic Jesus would return to earth and judge everyone. Non-believers would be tortured for a period of five months on earth (Revelation 9:4-5) before they are butchered and put on the hell-bound cargo postmortem. Let us rewrite this verse as it advocates the genocide of non-believers. It also portrays Jesus as a stereotypical proto-Middle Eastern terrorist. So, ‘Botox for Jesus’ is no longer just a creative pursuit. It has now become a necessity.

In my forthcoming book, What Every Hindu Should Know About Christianity, I decisively argue that the teachings of Christianity are entirely immoral. Therefore, I am skeptical that a rewrite could transform The Bible and Jesus into anything desirable than a rewrite could render the Mein Kampf and Hitler desirable. But, I would let the creative minds have a go at preserving the ‘religion of love.’ But until the rewrite and ‘Botox for Jesus’ are complete, can we propose a law to keep The Bible out of the reach of innocent children and pregnant women?

I will also propose a similar initiative to rewrite The Quran and give Muhammad a makeover.

In the meanwhile, let us thank Sagarika Ghose for triggering this important project. I never thought that support for such an initiative would come from the leftists. I have always thought of them as the minions of western imperialists and Islamists. I am counting on Ghose’s support to rewrite The Bible and the ‘Botox for Jesus’ initiative in the spirit of free speech and justice. I shouldn’t be overly optimistic though. The writer Arvind Kumar points out that another leftist colleague of Ghose, Siddharth Varadarajan advocates suppression of any criticism of Islam but encourages free speech to abuse Hinduism. So, let me cautiously hope that Ghose’s advocacy to rewrite religious texts is not directed at Hinduism only. In an era where petro-dollars and imperial missionary funding determines leftist posturing in the media, caution must underline optimism.

Shall we launch ‘Project Sagarika Ghose’ so that she gets due credit for triggering this important initiative? Ghose might be busy rewriting the Puruṣa Sūkta. So, others may embark on rewriting The Bible and The Quran under the project that is named in her honor.

[1] Beck, Norman A.: Removing Anti-Jewish Polemic from our Christian Lectionaries, a Proposal, http://jcrelations.net/en/?id=737.
[2] Dawkins, Richard: The God Delusion, Kindle Locations 4398-4402.
[3] Abrahamson, Irving [ed.]: Against Silence, the Voice and Vision of Elie Wiesel, Vol. 1, p. 33.[4] Published as part of the anthology Expressions of Christianity with a Special Focus on India.

[The author is a Silicon Valley-based writer, an atheist, a practicing orthodox Hindu, and author of the forthcoming book What Every Hindu Should Know About Christianity.]