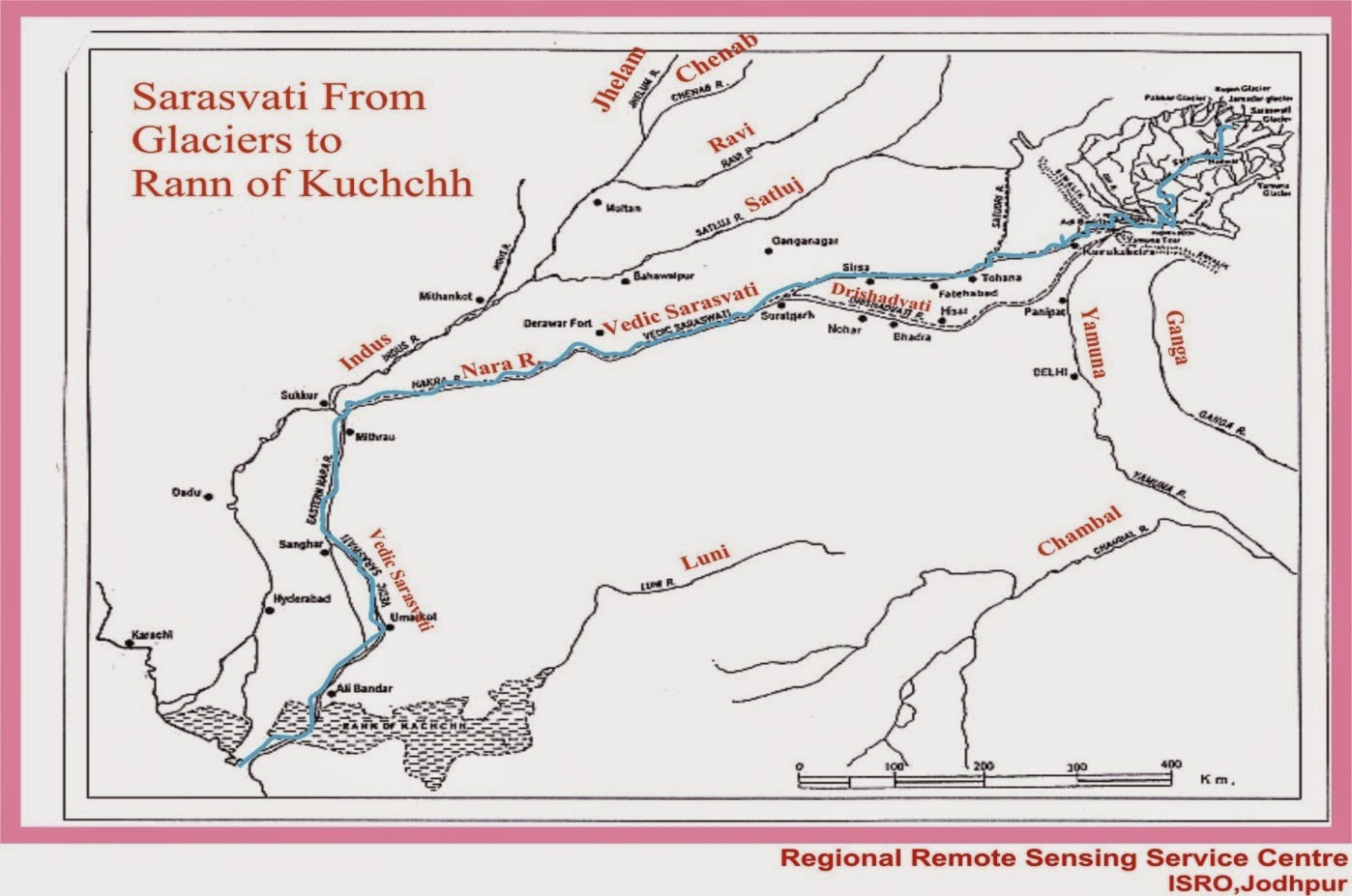 Sarasvati is celebrated both as a river deity, as her name and as the goddess of knowledge and ‘vak’-speech personified, is so identified because of her act of “flow”. Etymologically the word sara means to move fast, a water fall and river. Sarasa means juicy, tasty like honey, full of impassionate love, and charming. A fast-moving river with sweet water was personified and revered as a goddess, as she was the source of water for the people of Brahmavarta. She also was the goddess of speech, knowledge and learning which also flows like a river and be beneficial to mankind. All rivers flow but river Sarasvati was sacred to the Vedic people may be for the quality of water.

She was primarily a river personified as a deity and in this capacity of a mighty river several Vedic sacrifices were made on the banks of river Sarasvati and the adjoining Drishadwati both with the reputation of sanctity. The region in between these two holy rivers was called ‘Brahmavarta ’where the pious sages and human settlement resided and performed the sacred ceremonies. Sarasvati, the patroness of Vedic rituals and her other forms as ilia (the goddess of flow), Bharati (identified as goddess of speech) were invoked by Hotri priest (Rig Vedic priest) to be present during yajna rituals and be seated on grass as essential to the proper performance of yajnas bringing delight.

“Let Bharati come quickly to our worship and Ila showing like a human being, Let Sarasvati and both her fellows deft goddesses, on this fair grass be seated.”

Sarasvati is prayed to come with her sisters, and be seated on sacred grass to accept the havis offered in sacrifices.

In 2. 41.16 Sarasvati is called “the best mother, best of rivers, best of goddess, in thee Sarasvati, all generations have their stay. Be glad about Sunahotras’s sons O goddess, grant us progeny”

“The breast of thine exhaustless, spring of pleasure, wherewith thou feedest all things, choicest, wealth giver, treasure finder, free best ower, bring that, Sarasvati that we may drain it.”

Sarasvati as a mighty river:

Sarasvati was addressed as a sacred river, was also a mighty one, displayed copious flood in her flow, flooded by the storm of Maruts (wind god).

Rig Veda, 6.61.2-14 has hymns in praise of Sarasvati indicated to be ridging the hills, by high waves that are very strong.  She creates havoc with high waves in inhabited places. Since without Sarasvati, the place of settlement and the land would go dry, many stanzas are in praise of Sarasvati, where she is requested to flow calmly, give all the required sweet water for irrigation, and not chase away the inhabitants with her fierceness.

“She with her might, like one who digs for lotus-stems, hath burst with her strong waves the ridges of the hills.”

“Guide us, Sarasvati, to glorious treasure. Refuse us not the milk, nor spurn us from thee.  Gladly accept our friendship and obedience: let us not go from thee to distant countries.”

Fig. 1 and 2: Representation of the high waves of river Sarasvati in symbolic form.

River Sarasvati is addressed as “seven sistered”, her sisters being the other rivers of the present Panjab area. Among the many references to rivers as “sapta sindhu”, Sarasvati has earned the praise as the most dear amid the streams (6.61, 10 -14) who bestows prosperity on the five tribes. She is the most majestic and swifter of the mighty rivers

Stanza 10.75.5, there is mention of name “Marudvridha”.  Rig Veda mentions the storm influenced river, River Sarasvati, who is also called the “Mother of floods” increased by storm of Maruts.  Hence, the river Marudvridha might possibly be a reference to River Sarasvati.

“Coming together, glorious, loudly roaring – Sarasvati, Mother of Floods, the seventh – with copious milk, with fair streams, strongly flowing, full swelling with the volume of their water;”

Sarasvati as the illuminator:

Rig Veda equates Agni to Sarasvati, as both are illuminators.  Agni drives away darkness so also goddess Sarasvati, who with the power of knowledge drives away the darkness of the mind.  Sarasvati is in Agni, which makes Agni is speech (Agni’s speech is the sound he makes while burning and giving light) and thus Sarasvati and Agni are identical as both illuminate.

In 10 125.6, Sarasvati as vak and mantra resided in the tip of the arrow shot by Rudra in the battle (with Tripurasura) and slayed the demons.

“I bend the bow for Rudra that his arrow may strike and slay the hater of devotion. I rouse and order battle for the people and I have penetrated earth and heaven”.

Rig Veda 1.3.11-12, explains Sarasvati with her light, lightens and illuminates all pious minds: “Sarasvati, the mighty flood- she with her light illuminates, she brightens every pious thought.”

Rigveda chapter 10.71, and 10. 125 has stanzas related to Sarasvati as Vak and Jnana. Jnana or knowledge is an epitaph of Sarasvati. When Brihaspati gave names to objects, the knowledge was sent out as vak – the earliest utterances. Mantras recited by hotri priests in sacrifices were also the means of communication between men and Gods.

“With sacrifice the trace of Vak they followed, and found her harbouring within the Rishis (The word ‘her’ is Sarasvati or vak.)

“They bought her, dealt her forth in many places: seven singers make her tones resound in concert.”

Seven singers are with reference to the seven priests, sapta hotris.

Sarasvati as goddess of Vak is the voice arising from the pranavayu, the word, and speech personified. Rig Veda 10.125.1-12 describes the various aspects of personification of Vak as Sarasvati, regarding her place of origin and expansion:

“I am like breeze travelling with Vayu, enter all the living creature and like storm, I extend beyond the Pṛthvi”

About the movement of Vak – Hymn 1 state:

“I travel with the Rudras and the Vasus, with the Adityas and the All-Gods I wander.”

In the absence of Vak, everything is dumb.

Vak manifested as Mantra was also revered, as it was the means of communication between men and Gods.  In the sacrifice, the inspired Rishis understood the need for speech / words as fundamental requirement of religious ceremonies.  The priests are revered as they recite the hymns.   About her nature and capacities, hymn three states:

About the abstract form of Vak:

Vak is a like a woman not seen by any seer. But, after their insight into poetry and Chandas, Vak has been appearing in many stanzas to be comparable to a well-dressed woman.

“One-man hath ne’er seen Vak, and yet he seeth: one man hath hearing but hath never heard her.

But to another hath she shown her beauty as a fond well-dressed woman to her husband.”

A beautiful saying of Rig Vedic chant is that nobody has seen goddess Vak even though she is in everyone.  Everybody enjoys her manifestation as audible language but nobody has heard her speak.  She is a beautiful Queen, like a young woman dressed for her husband with all embellishments, which are none other than the literary aspects contained in the language.  The trace of Vak is that she is harboured within Rishis and the seven singers (seven Hotris or may be seven notes) make her tone resound in concert.  At a time when script did not exist, Vak the hymns were memorised through the faculty of hearing, and nothing of seeing and learning ever existed.  Vak personified as goddess was never seen but was only heard. She is called a queen in 10.125.3.

“I am the Queen, the gatherer-up of treasures, most thoughtful, first of those who merit worship.  Thus, Gods have stabilised me in many places with many homes to enter and abide in.”

Meaning knowledge is hidden in every word of the poetry.

Sarasvati as the vina player:

Sarasvati is not mentioned as goddess holding the string instrument Vina in Rig Veda and hence can be classified as a post Vedic manifestation of Sarasvati.

The vina of Sarasvati, Flute of Krishna and the percussion instrument of Shiva are like concepts. The yogis in deep state of meditation, here the anahata (unstruck)sounds with in as different stages of revelation. A yogi, when commences his meditation, must practice the asanas and pranayama at the initial phase to bring the wandering and demanding mind under control. The yogi, before attempting the kundalini yoga, has to clear the three psychological knots or obstacles called ‘granthis’ associated with Trinity as Brahma,Vishnu and Sadashiva granthis.   The first granthi at muladhara is called Brahmagranthi, the knots of physical world (the other two being knots of bondage, a social knot and ahamkara as the personal feeling of pride in one’s capacity).Until the longing  for worldly pleasures is cleared and negated, the Kundali (energy of spiritual power, seen as serpent power) cannot make her way of progress. When the yogi withdraws from mundane pleasures through the practices of yoga, he is said to have crossed the fundamental hurdle or knot recognized as Brahma granthi. With this the movement of spiritual knowledge, the yogi experiences a very relaxed state and the melodious tune begins to move, though not very clear in its manifestation. This stage is compared to the melodious sound of string instrument which does not give any words of poetry but just a melodious movement of a tune. Sarasvati is the goddess who brings the movement of knowledge or spiritual progress holding and playing the string instrument vina. This phase of evolution of mind is viewed as the blessing of Sarasvati, the goddess of knowledge who reveals herself in the yogi’s mind in the unstruck form of melody of string instrument. This abstract philosophy is depicted in sculpture and art medium as Goddess with iconography of Sarasvati playing a string instrument.

May Goddess Sarasvati reappear in the land of Bharata and make the land fertile.

May the Goddess of knowledge illumine our minds and make the flow of speech as sweet and beneficial as her waters.

May Goddess Sarasvati flow in every soul and enable everyone be relaxed and listen to her melodious flow of music within us.

“The Hymns of the Rigveda” by Ralph T.H.Griffith. Motilal Banarasidass Publishers.

“Symbolography in Indus seals” by Rekha Rao via Amazon at: http://amzn.com/B016QQKBQE