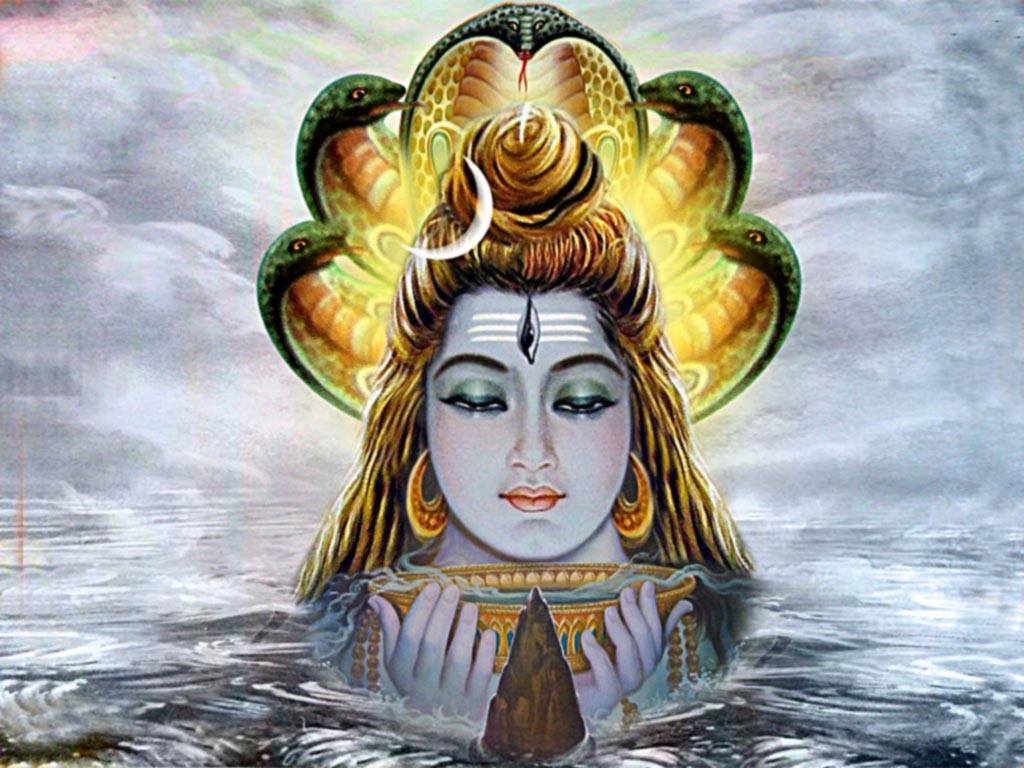 [contextly_sidebar id=”bgsTWOzHyBVG1fiSJGPMk6nwzNh6gzBg”]There is a persistent motif of the deva Rudra (Śiva) being originally refused ritual offerings of the yajña to which the other deva-s were entitled. Rudra eventually acquires his share of the offering, often via a violent confrontation with the other deva-s.

One version of this legend, first seen in the Brāhmaṇa texts like the GopathaBrāhmaṇa of the Atharvaveda, has Rudra destroy the ritual of Prajāpati and injure several of the deva-s upon being excluded from the ritual offering (GopathaUttarabrāhmaṇa 2-4).

In parallel, in other Brāhmaṇa texts there are other narratives of the confrontation between the progenitor deva Prajāpati and Rudra. One of these involves the slaying of Prajāpati by Rudra for the former’s act of incest with his own daughter.

An allusion to this legend is found in the Ṛgveda itself where the deva-s are said to call upon Rudra to enforce natural law by preventing the incest of Prajāpati (RV 10.61.7).

Image of Orion and Taurus with Aldebaran

This is an astronomical legend that preserves memory of the ancient movement of the equinoctical colure towards Rohiṇī( the daughter of Prajāpati, i.e. the orange star Alderbaran). In the sky the slain Prajāpati is represented by the constellation of Mṛgaśiras (Orion), his semen by the Milky Way, Rudra by Ārdra (Sirius) the brightest star in the sky (in apparent terms). The Invaka-s, three bright stars in a straight line (the belt of Orion), are said to represent the arrow of Rudra that pierced Prajāpati [Footnote 1].

By the time of the Mahabhārata, the old legends underwent diversification and recombination. One version is closer to the Vedic version in the Gopatha Brāhmaṇa, another one is closer to those found in the Purāṇa-s.

A version generally sharing elements with those found in the Mahabhārata also forms the foundation of the narrative regarding the origin of diseases from the wrath of Rudra in the Hindu medical Saṃhitā-s like those of Caraka.

In the Purāṇa-s, various versions of these legends emerge as products of a complex evolutionary process. This resulted in a “standard” version of the legend that is well-known to Hindus today. This combines four basic elements:

1) The suicide of Sati, the wife of Rudra in response to him being insulted by the Prajāpati at the ritual

4) The slaying of PrajāpatiDakṣa himself Rudra or his agents.

The exclusion of Rudra, the destruction of the divine yajña by him, and his subsequent accommodation have been interpreted by some as evidence for Rudra being an outsider to the Vedic tradition and being acquired from a non-Aryan source. We hold that this idea is rather untenable.

The Vedic tradition keeping with the ancestral Indo-European religion had different domains for different gods, and Rudra was by definition a god associated with the dreadful aspects of existence that are placed to exterior to the cocoon of civilization. His exclusion merely reflects his belonging to that realm. His eventual inclusion is an explanation for how the Vedic ritual can make such dangers of the world exterior to civilization beneficent (śiva) to those inside it. Thus, Rudra is regent of disease and toxins, but at the same time he is also the regent of medicines.

That this nature of Rudra was an integral aspect of the Vedic tradition is supported by the fact that cognates might be found in other branches of the Indo-European:

1) In the Greek, Apollo is the cognate deity of Rudra. He is called both Loimios, i.e. the bringer of plague and Paion i.e. the healer. He is also invoked as Apotropaios meaning one who is called upon to avert the harm that he can inflict. This is reminiscent of the Vedic mantra: “rudrasyahetiḥparivovṛṇaktu | (May Rudra’s missile be averted)”.

Apollo is a fierce god who is the slayer of many demonic entities even as Rudra is the slayer of many Dānava-s and Daitya-s. Finally, in the Homeric hymn to Apollo he is explicitly mentioned as being feared by the other gods as he approaches Olympos (the Greek svarga) with his bow and shining weapons – a clear parallel to the Vedic situation with Rudra:

I will remember and not be forgetful of the archer Apollo,
who by the gods is dreaded within Zeus’ house as he enters.
Straightaway all of them leap to their feet as he nearer approaches,
Out of their seats, so soon as his shining weapons he levels. 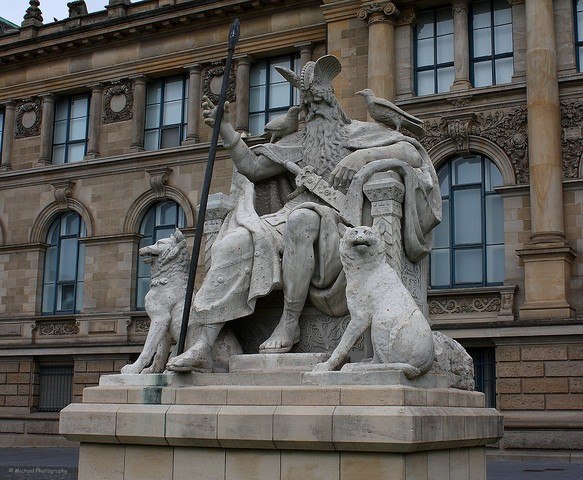 A limestone group statue of Odin behind the Museum of Lower Saxony in Hanover, Germany, created by sculpture Wilhelm Engelhard.

2) In Germanic tradition, Odin is the cognate of Rudra. In what survives of Northern Germanic legend there is an allusion to Odin being the god of the criminals or the outlaws. Likewise, in the long collection of mantra-s to Rudra known as the Śatarudrīya from the Yajurveda we see him being described as manifesting as various criminals. In the Germanic tradition preserved in Denmark, there is a specific allusion to a tale where the other gods kept Odin out of the realm of the gods for ten years so that they may not be tarnished by his “dangerous” connections.

Rudra in the Katha School

Given this brief background, we shall consider in greater detail a less-known version of the encounter of Rudra with the deva-s and his eventual acceptance as the great god from the Kaṭha branch of the Yajurveda.

The Kaṭha School of the Yajurveda was once widely practiced in Kashmir and hills of the Panjab/Himachal Pradesh. It is today sadly all but extinct due to the depredations of the Mohammedans in those regions. The text in concern comes from the Āraṇyaka of the Kaṭha-s, which is rather distinct in parts from its cognate of the widely practiced Taittirīya school:

Indeed the deva-s did not recognize Rudra who had entered the heavenly world wandering in with a solar lustre. They said: “Who are you?”. [He replied]: “I am Rudra, I am Indra, I am the Āditya, I am the arrival of all the divine lustre. They [i.e. other deva-s] said: We shall not offer a share to this one [i.e. Rudra]. Roaring he [Rudra] yelled at them. He rushed at them. They [the other deva-s] said: “Sir, you are all of this”. Because roaring, he yelled at them, that is Rudra’s fierceness (rudratvam). Because they called him sir (bhavān) that is Bhava’s lordship over existence. Because they said you are all this that revealed Śarva’s [prowess] as an archer. Because he then became favorable that is Śiva’s benevolence. Because he became kind to them [the other deva-s] that is Mṛḍa’s compassion. The deva-s said to him: “The overlordship of the present, the past and the future [is yours]. [If he knows this while performing the ritual, i.e. offering the portion for Rudra] it leads the ritualist to lordship over all.

In this Āraṇyaka section Rudra is given five names. In this it departs from the narratives in the Kauśītaki and ŚatapathaBrāhmaṇa-s, where Prajāpati, afraid of Rudra’s wrath confers eight and nine names respectively on him. Some of these names correspond to the five names given in the Kaṭha tradition.

The ninth name in the Śatapatha Brāhmaṇa, Kumāra, is taken to be that of Rudra’s son. The five names are explained by some followers of the Kaṭha tradition as corresponding to the five faces of Rudra whose mantra-s are found in the terminal section of the TaittirīyaĀraṇyaka. Thus, we have:

Śiva: Iśāna (The upward face associated with the Sadāśiva or the benign form of the god)

Three śaivaupaniṣad-s can be considered early with their probable temporal order being:

3) Atharvaśiras which is associated with the Atharvaveda, though its śakha affiliation remains unknown.

It survives today as four parallel recensions which share a similar frame narrative. The first two of these upaniṣad-s contain mantra-s from their respective Vedic Saṃhitā-s that are used in the rituals for Rudra. Of them, the Śvetāśvatara, presents one of the earliest extant teachings of yoga.

Atharvaśiras also presents an important early teaching of meditative yoga. Together these form the root of the later śaiva yoga practices, which appear serially in traditions known as the atimārga starting with the Pāśupatasūtra-s and the mantra-mārga, which is expounded in the numerous śaivatantra-s of various streams.

The Atharvaśiras opens thus (while the three recensions are similar in this regard. I am using the one I follow in my practice):

The deva-s indeed went to the heavenly world and they asked Rudra: “Sir, who are you?”

He [Rudra] replied: “I am the sole and primal one who ever was, is, and will be; there is nothing else other than mine.

Then Rudra is said to vanish from the sight of the other deva-s and they are described as praising him and identifying him with each of the deva-s. Thereafter, Rudra is connected with the essence of the insight attained upon drinking Soma in the ritual. It uses the following mantra, which is the derived version of a ṛk recited by the ritualist upon drinking Soma:

We have drunk Soma, we have become immortal, we have attained the light, we have seen the deva-s. What indeed can the evil-doers do to us? What is the mortal’s roguishness to the immortal – [such is the power stemming from] the subtle being who existed before the sun and moon (i.e. Rudra). 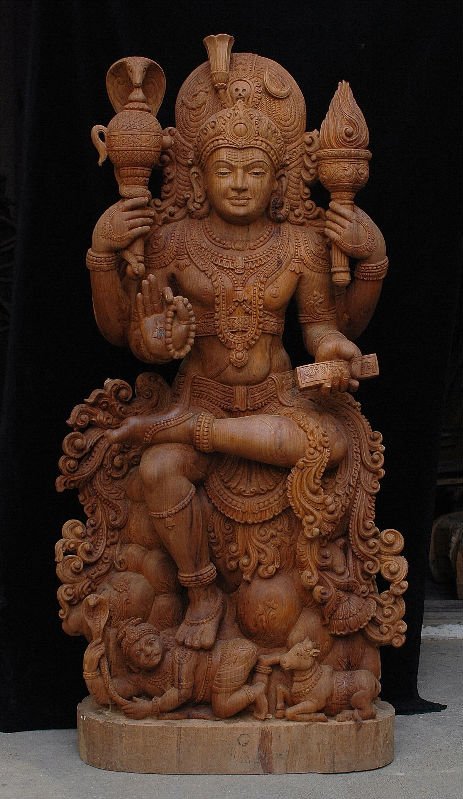 Thereafter the Atharvaśiras narrates several functions of Rudra and the epithets corresponding to them and finally gives the teaching of meditative yoga and the teaching of the śaiva ritual action of smearing oneself with ash.

The Vedic accounts, including the one in the KaṭhaĀraṇyaka, are used to illustrate a ritual point or special “insight” by knowing which the ritualist is able to attain success or power. We see that this ancestral framework is used in the Atharvaśiras to present the central śaiva teachings:

1) The primacy of Rudra

2) The universal nature of Rudra

3) Finally, the method of yoga.

In the KaṭhaĀraṇyaka, we already see elements relating to the first two of these points and these are used as is or expanded upon in the Upanishad. Where the Upanishad reconfigures matters is related to yoga.

Both the Āraṇyaka and the Upanishad presents the knowledge of the nature of Rudra as the means of achieving power via the ritual (the latter accepts the attainment of such power upon performing the soma rite via the grace of Rudra). However, it additionally presents yoga as the means to an insight that releases one from a certain bondage that is characterized as the being similar to the bondage of a domestic animal (the paśu-pāśa).

It is this freeing insight that came to be key concern of subsequent śaiva tradition.At the same time, it should be emphasized that even later śaiva tradition did not lose sight of the acquisition of power either.

Thus, via the KaṭhaĀraṇyaka we can trace how the old encounter of Rudra with the other deva-s evolved into the frame in which śaiva teaching was presented.

1: As the great patriot Lokamanya Tilak pointed out, the three Invaka stars also represent the belt/girdle or upavīta of Prajāpati. Indeed, even to this date when observers of Vedic tradition change their upavīta-s they use a mantra in which the girdle of Prajāpati at the head of the ecliptic path of Nakṣatra-s is invoked.