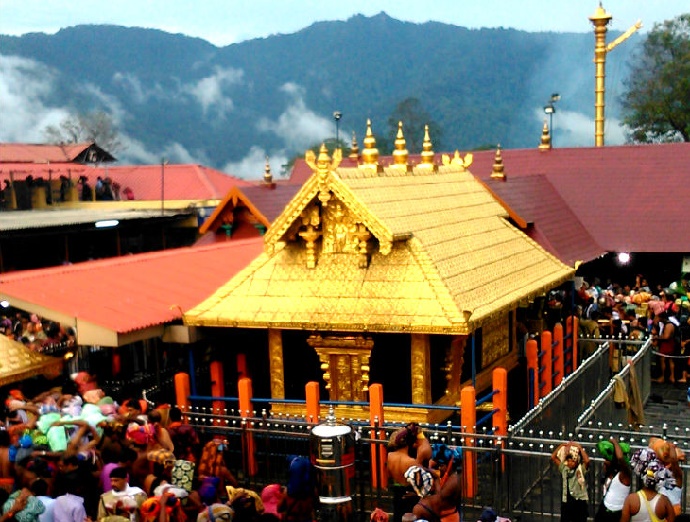 Since last year, a discourse around the concept of “Right to Pray” is being built by a certain section of feminists, activists, and media, who argue that Hindu practices like restrictions on the entry of women in certain temples like Sabarimala Ayyappa Swami temple, Shani Singapura temple, etc. amounts to misogyny and patriarchy and hence goes against the ‘progressive’ notions of “Gender Equality”. But, a careful analysis of this discourse would reveal how these activists are using “Gender Equality” as a means of undermining various Adhyatmic practices of Sanatana Dharma and preparing a field for the spread of Abrahamic religions.

Over the centuries, the concept of “Equality” has evolved into a necessary “human right” in response to various inequalities and discriminations prevalent at social, political, economic, and religious levels. Though, much of this discourse has evolved on the civilizational platform of the West as a response to various discriminations and inequalities prevalent in Abrahamic societies rooted in Abrahamic worldview, the concept of “Equality” itself is not completely free from Abrahamic influence. “Equality” discourse is not only “not free” from Abrahamic influence, it is in fact clearly rooted in Abrahamism, deriving key assumptions and principles from Abrahamic religious worldview.

Abrahamic religions are rooted in the belief in One God, One Book, One Savior, and One means of Salvation. Thus, the entire world is divided into believers and non-believers and faith in one true God alone qualifies as a tool for Salvation. This oneness in the path and goal, this sameness in belief, thought, and action constitutes the core tenets of Equality and Universal Brotherhood propounded by the Abrahamic religions. In other words, “Sameness” constitutes the very core of “Equality Discourse” of Abrahamism. In this worldview, there is no place for diversity- be it diverse beliefs, diverse competencies, diverse temperaments, diverse Gods, or diverse paths to emancipation. In the name of unity and equality, what Abrahamism promotes is “one size fits all” approach to solving all issues, which instead of solving trivializes them, destroys enriching diversity, and forcefully enforces conformity to “Sameness”. It is this “One size fits all” approach, which ails all discourses of Equality even today.

Equality Discourse has no place in Adhyatma

Santana Dharma, on the other hand, is a complex adaptive system, an “Open Architecture”, which is organic, decentralized, and very rich in diversity. It conceives the concept of “Ekam Sat” (One Truth), but in the same breath adds that its expressions are many (bahudaha vadanti) and hence rightly calls it “infinite” (Anantha). Thus, it not only recognizes diversity, it deeply cherishes it.

The core of Sanatana Dharma or Hinduism is “Adhyatma”- that which relates to the Self, which may roughly be translated as “Spirituality”. In this sense, Hinduism is very different from the Abrahamic concept of “Religion”. The term “Religion” is often derived from the term “Religare”, which means “to bind, unite”, and Abrahamic religions have always taken this unity to mean “Equality” created by destroying diversity and enforcing “Sameness”. Thus, there is no “Adhyatma” as far as Abrahamics are concerned, even with respect to Salvation, much less with respect to religious activities like Church mass, Sunday prayers, etc. How can there be an element of “Adhyatma” in systems, which do not even recognize the validity of the Atman-the Innermost Self? Thus, calling Hinduism as “religion”, while defining religion in the Abrahamic sense, is not only incorrect, but is also an injustice to millions of practitioners of its diverse Dharmic traditions.

Keeping “Adhyatma” at its center, Sanatana Dharma conceives a four-fold purusharthas (purposes of life) as the working framework of entire society. These four purusharthas- Dharma (Righteous Duty), Artha (Wealth and Security), Kama (Worldly desires), and Moksha (Liberation), act as guiding light in the life of each Hindu. Moksha (liberation), which is nothing but the realization of the true nature of the inner Self, is considered the ultimate purpose of life, and all actions, all other pursuits of life are used as a medium to travel the path towards Moksha. Thus, all life is Adhyatma- a pursuit of the Self and hence, there is no bifurcation between the sacred and the profane.

In this Adhyatmic pursuit, key elements that determine the path of the individuals are Svabhava (inner temperament) and Adhikara (inner competency). Since, each individual has different temperaments, different desires, and different inner-callings, their Svabhava are also different. Since, people are equipped with different skills and qualities in different intensities, their competency levels will be different as well. Hence, for each individual with his/her own unique sets of desires, temperaments, skills, and competencies to attain Moksha, unique tailor-made spiritual practices must be designed, so that all can fulfill their Adhyatmic quest, irrespective of race, gender, faith, etc. This is exactly what Hinduism has done. It has developed a complex but flexible framework, with both general guidelines (Samanya Dharma) for all people, irrespective of their qualities or competencies, and special tailor-made guidelines (Vishesha Dharma) for people with a specific set of skills and competencies, with further allowances for unique personal spiritual practices for each individual.

Hence, there is no place for Equality Discourse in the Adhyatmic framework of Sanatana Dharma, because Equality discourse disregards diversity in Svabhava and Adhikara of individuals and forcefully enforces “Sameness” among all people. Does this mean there are no issues of inequality in Hindu society? Definitely not. There is inequality at many levels in Hindu society. But, such an inequality and discrimination has crept in, because there is a lack of/poor implementation of the “Merit framework” and there is a loss of focus from Adhyatmic pursuit. Thus, the solution to those inequalities is not destruction of diversities, but reviving merit-based Dharmic system, whose focus is directed towards Adhyatmic pursuit.

Sabarimala issue: A Case study for how Equality discourse is being used to undermine Adhyatmic traditions

Sabarimala Ayyappa Swami Temple in Kerala is among the most sacred pilgrimage places for Hindus. Every year, thousands of devotees practice severe austerity for 41 days and undertake a pilgrimage to the temple on foot to have the Darshan of Lord Ayyappa Swami in his form of Naishtika Brahmachari (Eternal celibate).

A temple is not merely a place of congregation, wherein pleas are lodged and confessions are made. Instead, it is a place for practicing Upasana (worship), having Darshana (glimpse of the divinity), and expressing Bhakti (devotion). Hindu temple is the very house of the deity, wherein the deity has manifested for the sake of devotees by taking the idol as its body. Hence, the entire temple, when consecrated properly, will be filled with the bliss, the essence, and the energy of the deity, who has been invited to reside there. In other words, a temple is an energy center, to which devotees visit to harness the energy and interiorize the essence of the deity, so that each devotee can ultimately become one with the deity and realize the same Self, which inhabits both the devotee and the deity. Thus, visiting temples, offering worship there, and having Darshan of the deity are all aspects of the Adhyatmic pursuit of a Hindu.

Since, Brahman, the ultimate reality is infinite, his manifestations and its accompanying energy forms are infinite as well. Thus, each Deity has a unique name (nama), unique form (rupa), and unique Svaroopa (essence), accompanied by a unique kind of energy (Shakti). Owing to this diversity in the manifestations of Brahman and the energy that accompanies such manifestations, there is a diversity in the way temples are constructed, the way idols are carved and consecrated, and the way the deities are worshipped. Thus, each temple, especially the ancient temples hosting unique forms of deities, has its own rich and unique temple traditions and rules of worship, which caters to the unique essence and the energy of the deity present in that temple.

It is in this context that the issue of Sabarimala temple entry must be understood. Contrary to what has been propagated, there is no blanket ban on the entry of women into the temple. There is only a restriction on the entry of women of reproductive age and this has been placed to cater to the unique manifestation of Lord Ayyappa in his Naishtika Brahmachari aspect, which makes him unsuitable for worship by menstruating women [I have elaborated on this aspect here]. Many feminists have argued that this restriction amounts to infringement of the “Right to Pray” of women and hence is discriminatory to them. But, these feminists conveniently ignore that there are many other Ayyappa Temples, hosting different forms of Ayyappa and yet there is no ban on the entry of women in them. They also ignore how there are many temples and festivals like Pongal within Kerala itself, which are women only practices. Thus, the restriction has been placed not only to cater to the unique requirements of the deity manifested there, but also to cater to the unique requirements of the female devotees of menstruating age.

The fact that these feminists and liberal activists conveniently ignore temple traditions, which are inconvenient to their Equality narrative, but instead focus exclusively on traditions, whose narrative can be manipulated and exploited, shows how this Equality discourse is being used for destroying the rich diversity of Sanatana Dharma and undermining Hindu Adhyatmic practices. #RightToPray initiatives, be it with respect to Sabarimala temple, or with respect to Shani Shingapura temple- they all serve as case studies showing how Equality discourses are being utilized to undermine Adhyatmic traditions of Sanatana Dharma and prepare the ground for harvest by Abrahamic ideologies.

It is important to note that, if campaigns like #RightToPray were to succeed (they have already in the case of Shani Singapura), it would not only be infringing on the rights to freedom of worship of the devotees of those temple traditions, but would also destroy the Dharmic framework that facilitates unique tailor-made Adhyatmic practices to each individual based on his/her temperament and competency. If such a destruction of the Dharmic framework were to materialize, then the loss would be to the practicing Hindus, both men and women, who would no longer have access to tailor-made Adhyatmic practices.

It is thus welcoming to see how women devotees of Kerala have started to recognize the dangers in the Equality discourse being propagated by #RightToPray activists and have instead started #RightToWait campaign to reclaim the narrative about Hindu Adhyatmic traditions and uphold the people’s right to practice a personalized tailor-made Adhyatmic practice.