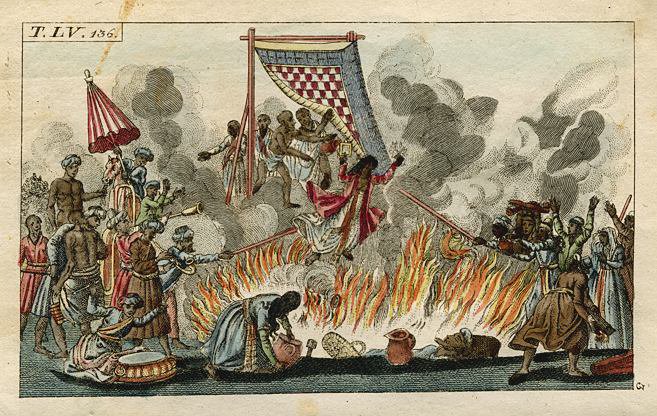 Colonial accounts of Indian Society created a narrative of “oppression” and justified the White Man’s rule as necessary for civilizing the natives. The threads of this run parallel to the missionary narrative of “saving the souls” of the natives by converting them to Christianity. These impulses generated atrocity literatures about Hindu society and continue to do so today. Among the litany of ills that Hindus needed to be saved from were “child marriage,” “female infanticide and foeticide[1],” “dowry”, “caste” and, of course “Sati.” These memes are still used as attacks on Hindu society, not by evidence, but by the sheer power of rhetoric, which goes like this—“How can you justify traditions? If the British hadn’t banned Sati, Hindu widows would still be burnt on the pyre.” Facts can only be reduced to timid whispers in the face of rhetoric such as this, “but, but ….” What we need is neither to “justify” nor to “attack” but first to understand, on our own terms, without the burden of the colonial gaze and agendas, the factual basis, if any, of these narratives.

For Sati, the questions are as follows. The reader is urged to guess the answers to these questions for themselves before reading on.

IndiaFacts has put together a series of articles to answer these questions.  The first and the most important information is that, throughout Hindu history, Sati was an exceedingly rare act. As Subhodeep Mukhopadhyay shows, even in the most aggressive estimate no more than 1 in 400, i.e.  .25% of widows committed Sati.  The actual number is likely to be more like 1 in 50,000 i.e. .002%, even assuming 95% of the cases of Sati were not recorded[2]. As one data point, more than 1 in 20,000 women committed suicide in the UK in 2015[3], 250% more than the estimated rate of Sati historically. In actual practice, Sati may have been even rarer.

The fact that Sati was recorded and commemorated in rock inscriptions itself points to both the rarity and honor surrounding the act. Suicide, of course, is not honorable. Why would Sati be?

Let us ask the question another way. For a moment, let us assume that Sati was voluntary. If (very few) women decided to be Sati, with full agency, did they have the right to let go of their bodies?

To this, we must look at Hindu and Christian view of life itself.  By Christian law, which the British Penal Code imposed on India, suicide itself was illegal and a “sin.” Why is suicide sinful in Christianity?

The influential Christian theologian Augustine lays out the most comprehensive condemnation of suicide from a Christian Standpoint. In the City of God, he argues “that Christians have no authority for committing suicide in any circumstances whatever.[4]”  This is because the commandment “thou shalt not kill” includes not killing oneself, thus suicide goes against “God’s” commandments. Further, human beings “belong to God” and not to themselves, thus cannot take their own life.  For Augustine, taking one’s own life is tantamount to murder.

“For if it is not, lawful to take the law into our own hands, and slay even a guilty person, whose death no public sentence has warranted, then certainly he who kills himself is a homicide, and so much the guiltier of his own death, as he was more innocent of that offence for which he doomed himself to die.”[5] (em .added)

In effect, suicide is murder since it violates “God’s commandments” and human beings don’t own their life and bodies but “God” does. Thus, taking one’s life is not warranted in any circumstances, and is a “sin.”

It is not surprising that Sati horrified Christians, even apart from the missionary zeal to show Hindu traditions as evil and make a case for conversions. However, the Hindu view of taking one’s life is far more nuanced.

While suicide from a state of despair is condemned, a voluntary and conscious leaving of the body may, under the right circumstances, be ritually undertaken like the Jain Santhara or Sallekhana.

The colonial Indian court enforces a penal code emerging from Christian theology, which makes suicide illegal. It has no understanding of suicide versus the conscious ritual discarding of one’s body in the Indian traditions, such as the Jain tradition, quoted here from Nithin Sridhar’s article, or the Vedic ritual of Prayopravesha or Sallekhana. Importantly, “there is a feeling of hopelessness and helplessness in a suicidal person, whereas no such feelings exist in a spiritual practitioner. The spiritual practitioner is dispassionate, self-controlled and practices Sallekhana for spiritual merit…[6]”

Prayopravesha comes from dispassion, the extinguishing of desire, and is an evolved understanding of the temporary nature of the body. It is an act of gyani and not of an agyani. Augustine’s “God” is not involved here.

Voluntary death of a conscious being is a ritual act. In the Jain Santhara, it is a way to discard the body in a state of awareness and meditation, in contrast with the unnatural prolonging of life which is happening in “modern medicine” today, where people who face imminent death in old age often die in hospitals with tubes and needles stuck into them, away from loved ones in ICUs, and forcibly being breathed into via ventilators.

Coming back to Sati, when one understands prayopravesha as a conscious willing embrace of the death of the body, we see that ritualistically, death by fire is available to both men and women.

As Dr. Sammod Acharya writes “within the Veda we have Yajna specifically recommended for one who wants to die voluntarily. This Yajna known as Sarvasvara (सर्वस्वार) or Shunaskarnastoma (शुनस्कर्णस्तोम. In Tandyamahabrahmana (Brahmana belonging to Samaveda) this Ekaha (Yajna finished in one day) has been specifically mentioned to be done by one who wants to die by entering to the fire of the Yajna…[7]”

This choice is available to both men and women. “The vivid description of how Dhritarastra, Gandhari and Pritha (Kunti) chose to die in the fire of the forest is found in 37th Adhyaya of Ashramavasika Parva[8].”

Sati can be regarded as a form of this Yajna, and most critically, Sati is ritually sanctioned only when it is voluntary, and is not being done out of grief of despair, but as an act of love and dispassion. The only role of the family, and others, is to dissuade the Sati at the slightest hint of fear or unwillingness.

“If the widow, after thus ascending the pyre, becomes afraid or loses her resolve to continue or simply does not wish to continue with the ritual, the texts note that one of her relatives must make her to get up and come down from the pyre[9].”

To be a Sati is a choice and an honor. “The first recorded foreign account of Sati-pratha is that by Diodorus of Sicily and describes an eyewitness account of Hieronymus of Cardia (~326 BCE) who describes the quarrel between two widows as to who would have the honor of dying along with her husband[10].”

Given all this, it is natural that Sati was very rare. How many women were at the state of dispassion to undergo Sati as a Yajna? Historically, very few, and the rare ones who did would become part of folklore.

When we come to British accounts of Sati we face two paradoxes. How is it that Bengal, which had record of very few Satis, even during the early British period, showed a “mind-boggling” increase in claims of numbers of Sati from the 1800s?

“As Evangelical Christian movement started gaining more prominence in India starting from 1800, enumeration of sati incidents sky-rocketed and suddenly annual 10,000 sati incidents were being reported from Bengal alone in 1803, a mind-boggling increase of 2000x, and some even suggested 50,000 sati occurrences annually! According to government figures, 8134 widows performed sati in the 14 years between 1815 and 1829, of which more than 60% cases were recorded in Calcutta, a region which had almost no history of sati, thereby casting doubt on the validity of government data[11].”

If Sati increased 2000 times after 1800, there are two explanations. First, and the most likely one, is that the numbers were greatly exaggerated for missionary propaganda. As Meenakshi Jain writes,

“In the nineteenth century British Evangelicals and Baptist missionaries grossly exaggerated the occurrence of sati for two reasons. Firstly, they wanted to secure permission of the British Parliament to proselytize in the East India Company’s territories in India, which was denied to them till 1813. Secondly, to justify British presence in the country, they presented remarkable accounts of what they described as the evils of Hindu society, topmost among them widow immolation[12].”

For a moment, let us discount the need for missionaries to create atrocity literature and assume that Sati did increase in the British Raj after 1800 (though perhaps not to the extent of missionary exaggeration.). Clearly then, the explanation for this dramatic increase must be found in the particular circumstances of British rule, and not in the “Hindu tradition” in which Sati was a very rare event for centuries.

Here we look at two other interesting factors. One is that most of the Satis, contrary to popular depictions, were middle-aged or older women; two-thirds were over the age of forty. Secondly in India, widows had been supported by State grants and also had the right to inherit property.

Both of these were changed by the British. Unlike in India, British women did not have the right to property, and the same British laws were also imposed in India where women could not own land. (This also led to the importance of male children, since without a male heir, people would stand to lose their lands). Secondly, there is some evidence that grants to widows were stopped by the colonial state.

Thus, rather than “saving” Hindu widows, as colonial historiography and missionary accounts would have us believe, the Christian colonial state was responsible for their penury.

I will end with another image from an Eastern culture. On 11th June, 1963, Thích Quảng Đức, a Vietnamese Buddhist monk, burnt himself to death in the middle of a busy road in Saigon, in protest against the policies of President Ngo Dinh Diem. President Diem was a Catholic, pushed discriminatory policies and persecution of Buddhist in Vietnam, including in the allocation of land. Thích Quảng’s self-immolation was an act of dramatic protest against repression by the Catholic government.

Quảng Đức during his self-immolation in 1963 at a busy Saigon road intersection | Source: giacngo.vn

Here then are the questions for future research. If there was some increase in Sati in 1800, were some of these a form of protest against the colonial state? What policies of the British State were leading widows in penury and decreasing their status in society? Did this decrease in status cause some coercive cases of Sati? Did the State then turn the narrative on its head in a blame-shift, creating atrocity literature to put “Hinduism” in the dock while showing itself as the “savior”? To what extent did the colonial elite, of that time, and of today internalize these fake narratives around Sati?

[1] Jain, Meenakshi. Missionaries and the debate on Sati in Colonial India. http://indiafacts.org/missionaries-sati-colonial-india/

[12] Jain, Meenakshi. Missionaries and the debate on Sati in Colonial India. http://indiafacts.org/missionaries-sati-colonial-india/

Faulty Numbers behind the USCIRF