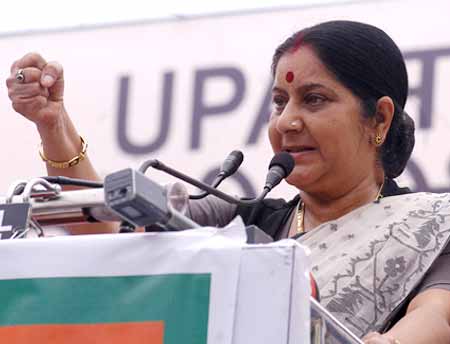 Club 160 is at it again. L.K Advani, Murli Manohar Joshi, Sushma Swaraj, et al. Sulking, sullen, upset—these are some of the words the media uses to describe their mood. Caught in a time warp, they refuse to acknowledge that the country has moved on. The Congress-style high command culture is, thankfully, behind us.

Also obsolete are the superstitions of the Nehruvian age in which the virtues of Big Leaders were unquestioningly accepted rather than critically examined, patrician wisdom was considered infallible, socialism was viewed as the culmination of great thought, and secularism was recognized as the theology of the Indian Republic. To this class, Narendra Modi has emerged as the barbarian who has blasted the ramparts of the fort which was built by Nehru and which outlived him for half a century. But Club 160 still believes that the barbarian will abide by the canons of a bygone era, that too the very era he has striven to end!

Of all members of the club, the most conspicuous is Sushma Swaraj. The Bharatiya Janata Party (BJP), or most of its members may be willing to tolerate the cantankerousness, idiosyncrasies, and senility of Lal Krishna Advani, for if there is one person who should be credited for building up a party that became a credible alternative to the Congress, it is he. If nothing else, his unreasonable demands can be viewed in this perspective.

Joshi’s contributions are not comparable with Advani’s, but they aren’t mean. He served in prison during the Emergency. He has headed the party. He also led a yatra to Kashmir at the height of militancy. When he was minister in the Atal Bihari Vajpayee cabinet, he did challenge the Left hegemony in academics, though his efforts proved to be inconsequential.

But what about Sushma Swaraj? As leader of the Opposition in the Lok Sabha, she was known more for her proximity with Congress czarina Sonia Gandhi and for her bonhomie with BJP hater and communist leader Brinda Karat rather than for promoting the interests of her own party. Under Sushma Swaraj’s stewardship, the parliamentary wing of the BJP almost routinely rubber-stamped the mindlessly populist proposals of the Congress-led United Progressive Alliance (UPA) government. The worst was her acquiescence to the fiscally disastrous and economically ruinous food security law. At that time, she made the idiotic statement that her party would support the legislation despite it being “half-baked and weak.” Her rationale: “we are waiting for the day when we come to power and we will be able to improve the law.” In other words, if you don’t come to power for 10 years, the country should suffer.

Her friendship with Sonia Gandhi, the nucleus of the most corrupt regime in the last couple of centuries in India, has been the subject of a lot of speculation, gossip, and anguish. How can you be befriend somebody who has done everything to bleed the exchequer, jeopardize reforms, destroy the economy, hurt national defence, undermine internal security, and boost corruption?

Perhaps because of her friendship with Sonia, she did everything in her power to torpedo Modi’s bid for the BJP’s prime ministerial candidate. While he was hopping from one corner of the country to another—addressing 450 rallies and clocking over 300000 kilometers, Sushma Swaraj barely campaigned outside her own constituency, Vidisha in Madhya Pradesh. And now she wants a “respectable position” in the Narendra Modi government. Takes a lot of cheek to put out this kind of an undeserved demand.

The media has also reported Sushma Swaraj demanding a position corresponding to Sonia’s in the grand old party. This presents a problem: the Congress is a party whose leaders love to be the flunkeys of the Nehru-Gandhi Family. Unfortunately for Sushma Swaraj, there is no such family in the BJP.

It would be interesting to observe for how long Narendra Modi will tolerate the tantrums of irrelevant leaders like Sushma Swaraj. His tolerance level will be indirectly proportional to his chances of success in New Delhi.